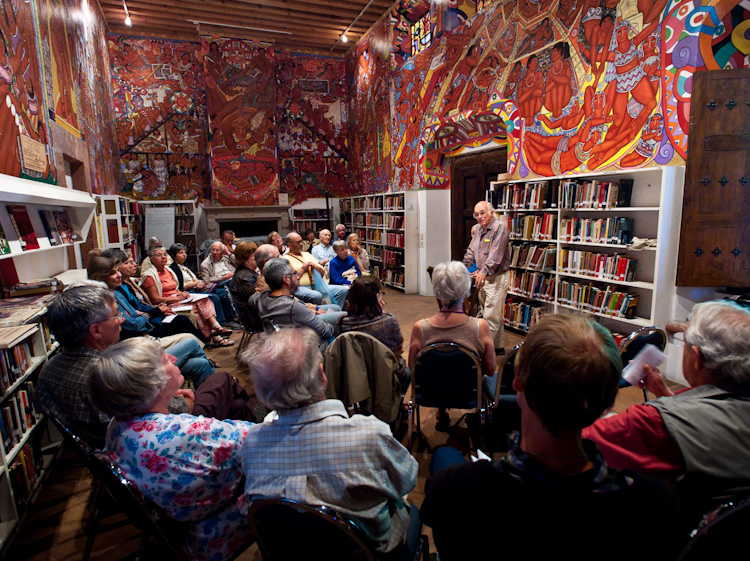 It is well nigh impossible to be bored in San Miguel de Allende. Every day upwards of twenty-five offerings from art openings, concerts, and lectures, to classes of all types provide stimulating reasons to get out of bed.

Of these many cultural and intellectual events we have found ourselves drawn to those of the Center for Global Justice, www.globaljusticecenter.org, another project by expatriates concerned with their adopted community. Several times each week the Center screens interesting, pertinent documentaries. It offers lectures on topics like globalization, immigration and the effects the North American Free Trade Agreement is having on Mexico.

Each Saturday, the Center sponsors trips to small communities outside San Miguel who they are assisting in their efforts to remain self-sufficient and build viable alternatives to traditional lifestyles that are currently under threat.

I have participated in two of these trips. One, to the community of El Moral, where women of the town have joined together to form a sewing cooperative, the other to Peñon de los Baños, where six families in this dairy community are working to establish a cooperative venture growing organic, greenhouse tomatoes. 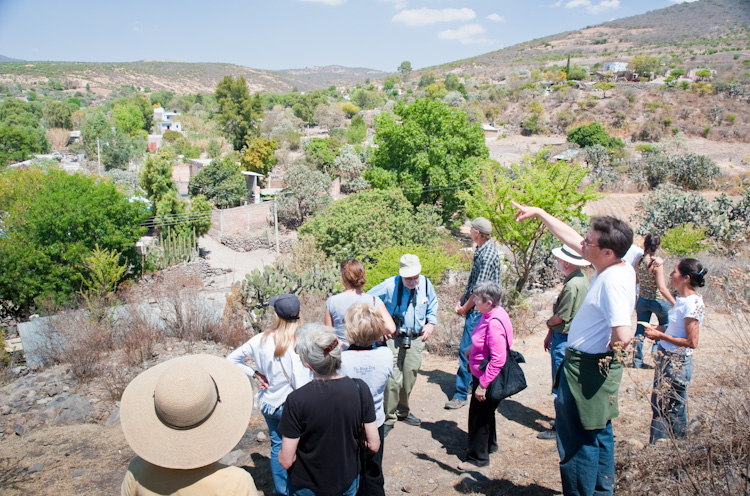 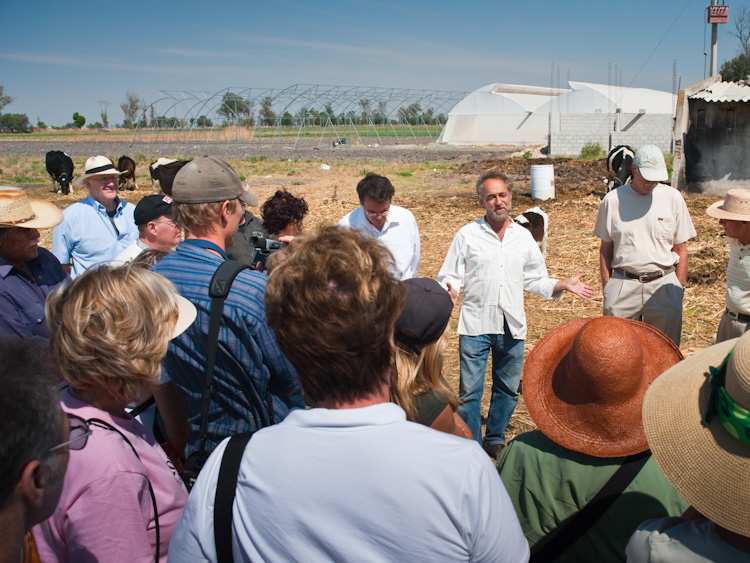 Prior to NAFTA, Mexico was self-sufficient in their primary staples; beans and corn. It now imports huge quantities of these basic food stuffs from subsidized agriculture in the United States. This has brought prices below where local farmers can compete. At the same time, huge amounts of land formerly belonging to small self-sustaining farming communities called Ejidos, have been bought up by wealthy land owners who export their food to the US. To understand how this happened, it is necessary to know a bit of Mexican history.

A primary cause for the second Mexican revolution in 1910 was that the vast amount of arable land was owned by a few wealthy landowners and the church. The average peasant, working for landowners, barely scraped by. The new constitution brought about a redistribution of land under the “Ejidal” system, a structure of land tenure in which groups of farmers were given land which they farmed individually and cooperatively. Under the constitution, Ejido land could never be sold, protecting the peasants from predatory developers.

Ratification of NAFTA in 1992 required a change to the Mexican constitution so farmers could sell their ejido land. Globalization and pressures from agribusiness have forced many peasants to sell. The result has been an accumulation of land in the hands of wealthy land owners with the previous owners now farming it as low wage laborers.

One such corporate farmer, not far from San Miguel de Allende, has accumulated about eight square miles of ejido land, producing vegetables for the U.S. market. Adjacent to it lies Peñon de los Baños, which has resisted selling out. 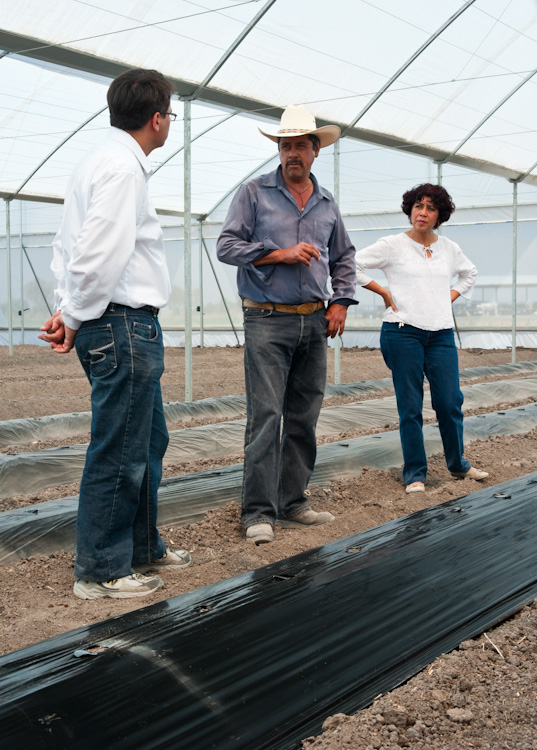 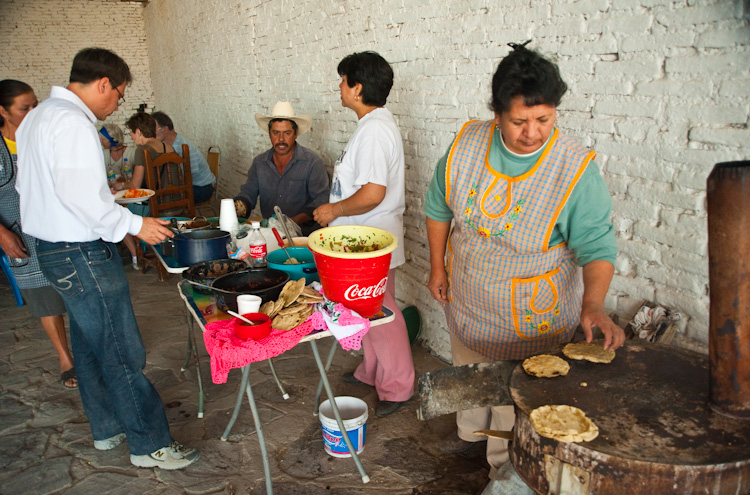 Lunch prepared by co-op members is a highlight preceeding the discussion. 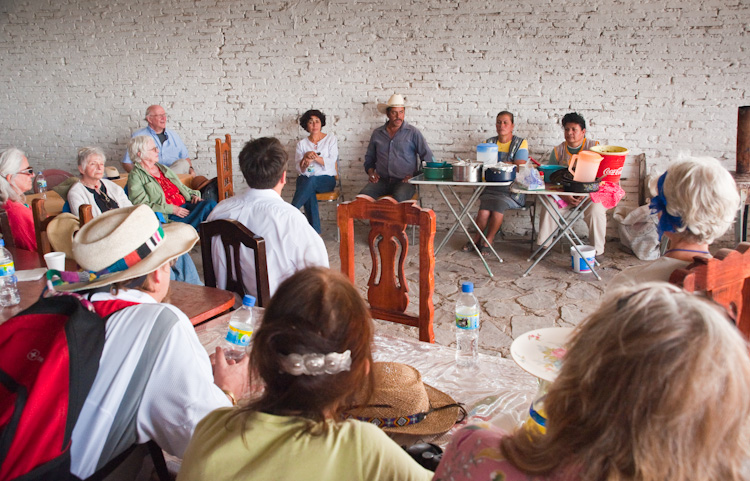 Learning directly from a few of the co-op members about the challenges they face in their business and everyday lives.

The Center for Global Justice has been assisting the people in contacting other groups who are successfully growing organic tomatoes in greenhouses using drip irrigation. With the center’s help, they have applied for government grants and loans.

From the contacts facilitated by the center, and with much hard work, they have learned the intricacies of growing and marketing tomatoes. They now have eight greenhouses and are building homes for community members returning from the US to work in this business. 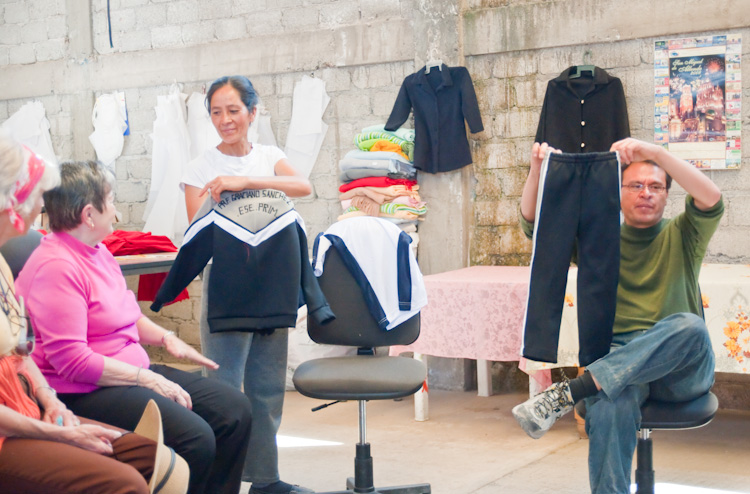 Co-op founder Angelina Sotto Rios shows off one of the school uniforms made by the co-op. 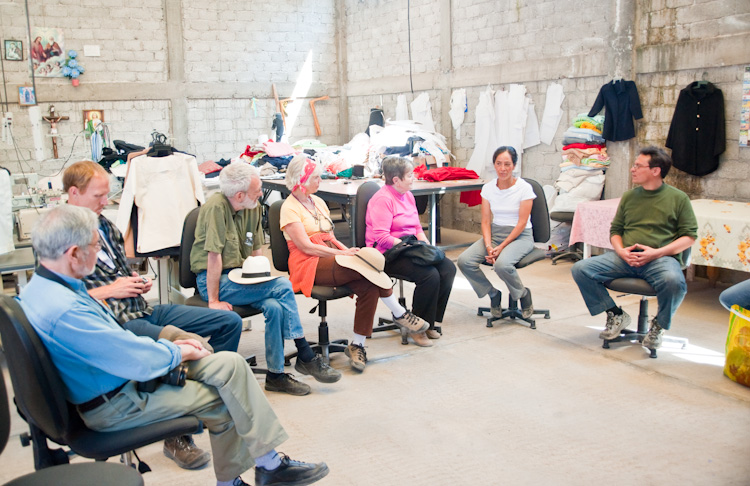 Learning about the operation of the cooperative.

The sewing cooperative in El Moral is spearheaded by the dynamic Angelina Sotto Rios. Faced with the need to either sell land or send community members to El Norte for work, she and members of her community decided that forming a sewing coop to provide work in the town was a far better choice. Her tireless efforts, along with assistance from the center navigating the legal complexities, have resulted in organizing the coop and attaining government grants to buy the land, building materials and sewing machines. 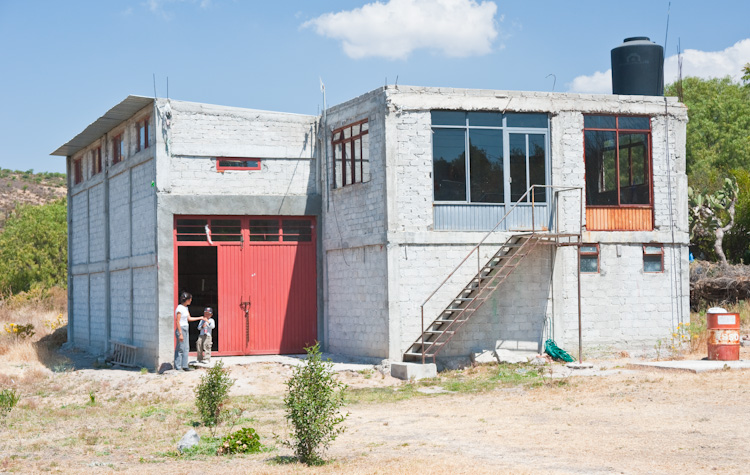 Angelina and her son outside the co-op building.

She and her fellow coop members are now producing school uniforms for local communities as well as clothing for the tourist market. Sotto Rios hopes to expand into other markets.

One major hurdle solved through the Center was the difficulty getting their product to market. Carrying large, heavy bundles of finished clothing three miles to the nearest transportation was extremely difficult. The donation of a vehicle by a person how had attended one of the Center’s Saturday trips has helped propel the woman of El Moral toward their goals.

At present, about 150 people from El Moral are working in the U.S.. As in Peñon de los Baños and the ten other communities the Center for Global Justice is working with, the hope is to enable their community members to come home, to return from the U.S. to opportunities within in their own towns and to provide an environment in which their children can flourish.

The New York Times recently did a very good article about Mexico under NAFTA. Here’s the link: