The Geographical and Historical Center of Mexico 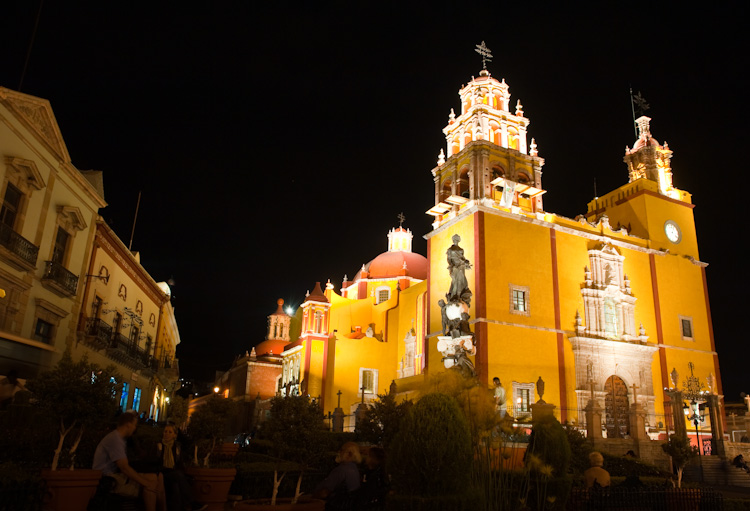 The 16th century Basilica in the heart of Guanajuato on the Plaza de la Paz.

Historical currents swirl around San Miguel de Allende. Events emanating from the region have swept over Mexico several times. Within an hour’s drive, revolutions began, tragic empires were vanquished and the western United States was created. The state of Guanajuato, Mexico’s geographical center, is the birth place of Mexican independence and its silver mother-lode. 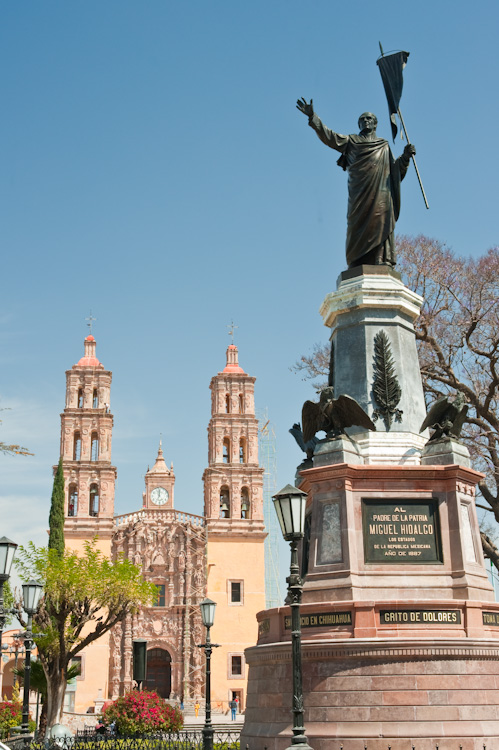 The statue of Father Hidalgo with his parrish church behind, stands proudly at the center of Dolores Hidalgo’s main plaza.

The 1810 revolution began in Dolores Hidalgo a half hour from San Miguel de Allende. On the morning of September 16th, Father Hidalgo, issued his cry of independence galvanizing a downtrodden people against their Spanish masters. 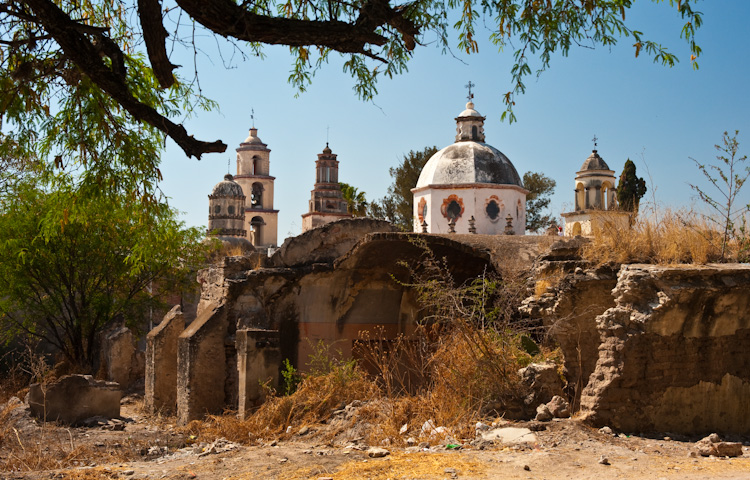 The Santuario of Atotonilco behind ruins from another century.

Seven miles from San Miguel lies the tiny town of Atotonilco, one of Mexico’s most sacred shrines. After issuing his cry for independence, Father Hidalgo, leading his growing army of ill-armed peasants, along with Ignacio Allende for whom San Miguel is named, stopped at the shrine of Atotonilco. Taking its banner of the Virgin of Guadalupe to use as their standard, they passed through San Miguel and surrounding towns, gathering a force 20,000 strong. This ragtag army then marched on the city of Guanajuato for the first battle in a thirteen year struggle for independence. 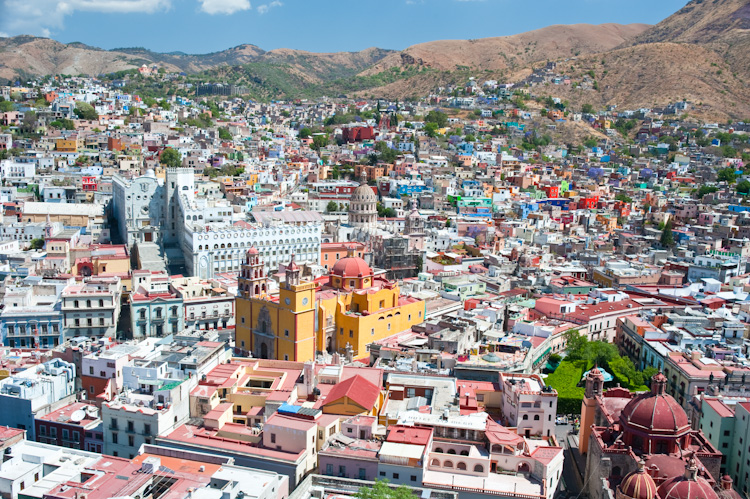 Guanajuato with the University and Basilica to the left and the San Diego Church and tree covered Plaza de la Union bottom right. 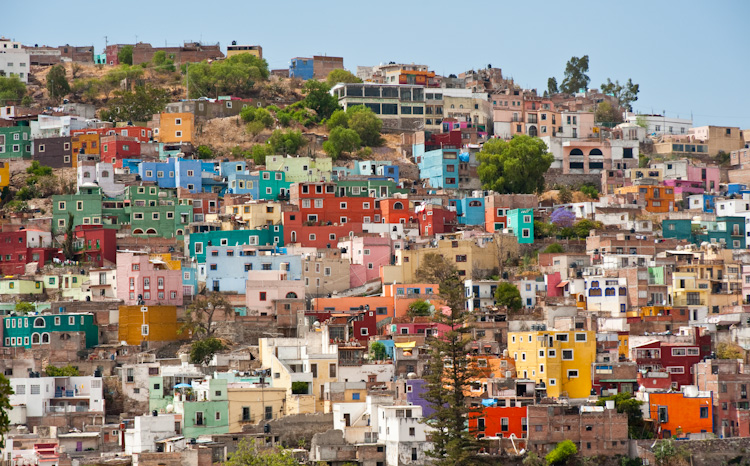 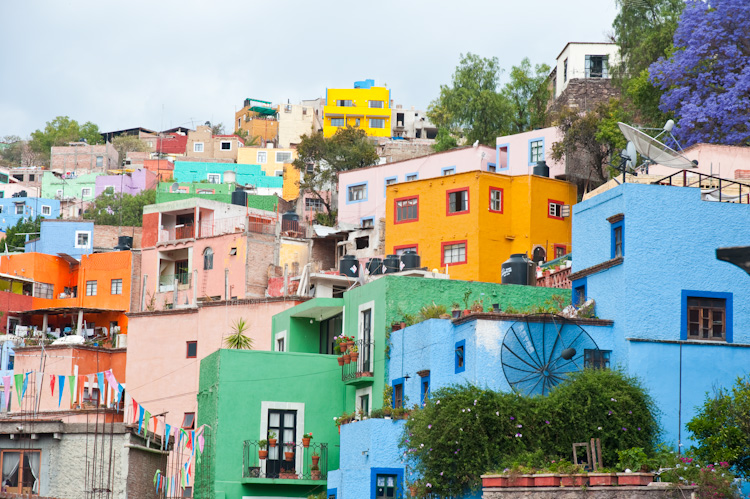 Traffic is restricted. The primary thoroughfares move within a labyrinth of stone-walled tunnels beneath the city. Guanajuato is a walking city with a wealth of tranquil, tree-shrouded plazas in which to sit, converse, enjoy a drink and people watch. The opulent, 19th century Teatro Juarez and the ornate, San Diego Church, preside over the elegant Parque de la Union, the city’s focal point.

Spanish colonial influence is ubiquitous. I have not experienced a city in the Americas so full of European flavor. With a university dating back to 1732, it is an intellectual and cultural center. The annual Cervantes Festival has a long tradition. October plays host to theater, musical, and dance performances in the plazas and theaters across the city. 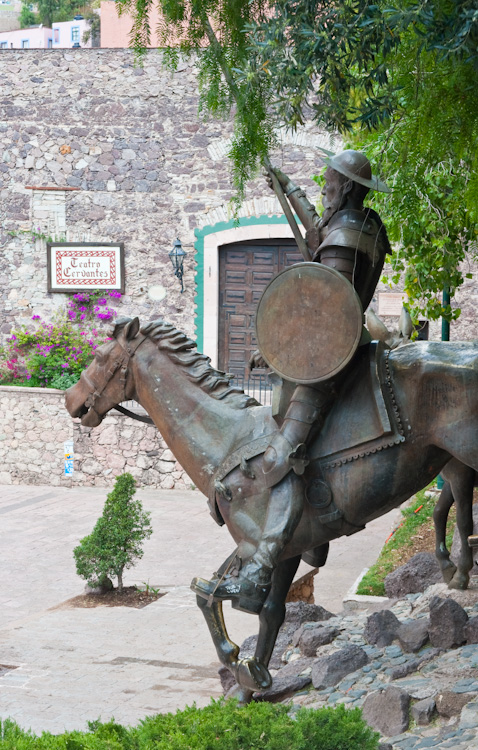 A statue of Don Quixote and the front of the Cervantes Theater. 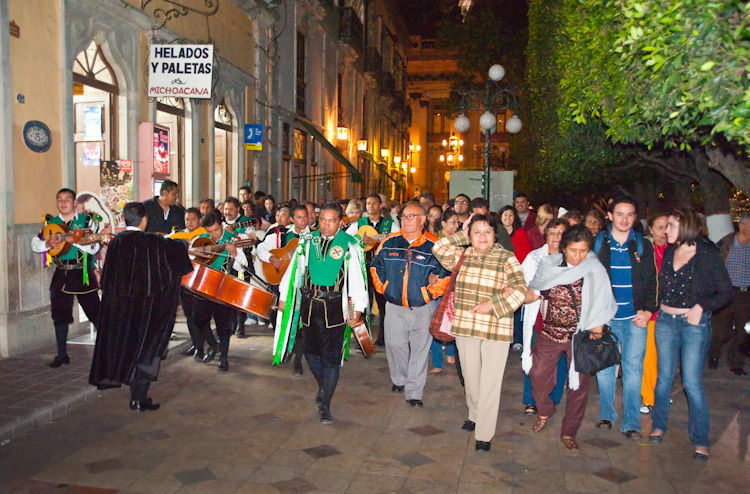 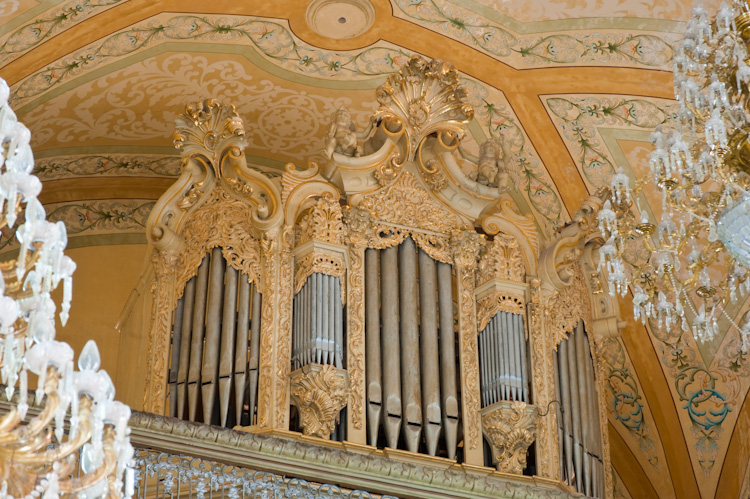 The elegant Baroque organ in the Basilica of Guanajuato

The vast wealth of Guanajuato’s silver mines fueled the city’s importance making it the commercial and financial center of the region. For a period, one mine alone, La Valenciana, supplied the majority of riches accumulated from the New World by the Spanish crown. 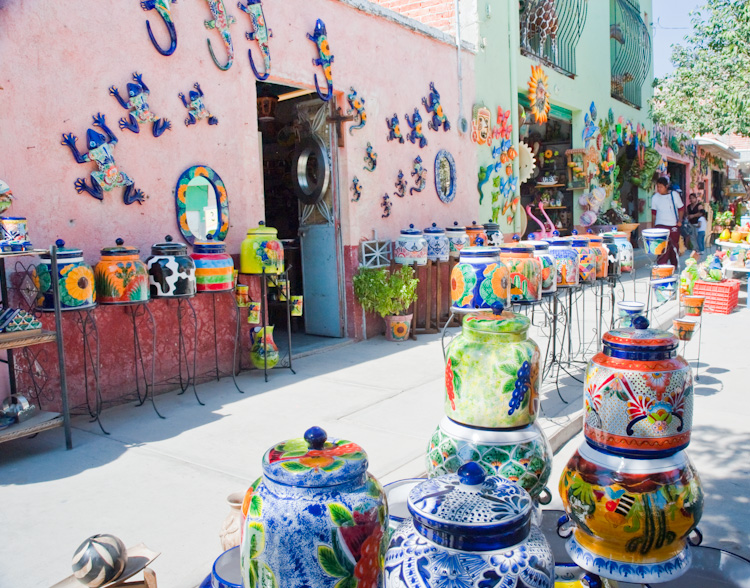 Ceramics stores along the streets of Dolores Hidalgo.

Other than Dolores Hidalgo’s historical significance and its lovely plaza fronting Father Hidalgo’s parish church, two reasons remain to visit: the beautiful, talavera ceramics, and it’s ice cream. Several ceramics factories supply store after store with colorful and inexpensively priced pots, plates, bowls, decorative items, wash basins and even toilets. Find an intricately painted wash basin you like and there’s a toilet to match, inside and out. 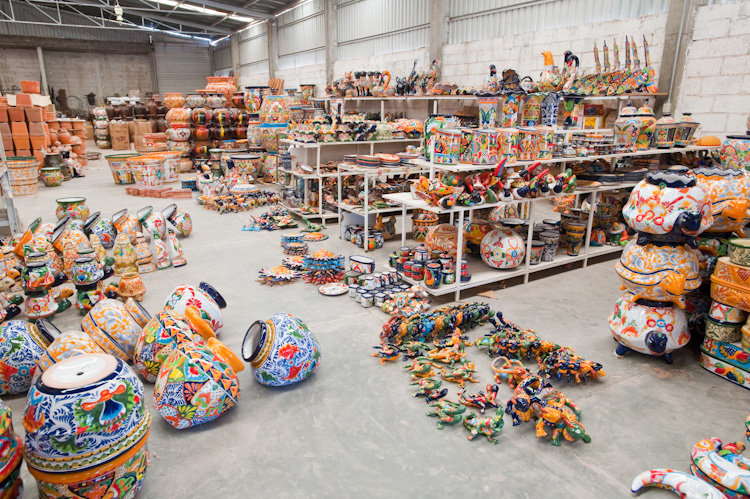 Ceramics in the factory Artesanos Gamez being displayed for sale and readied for export. 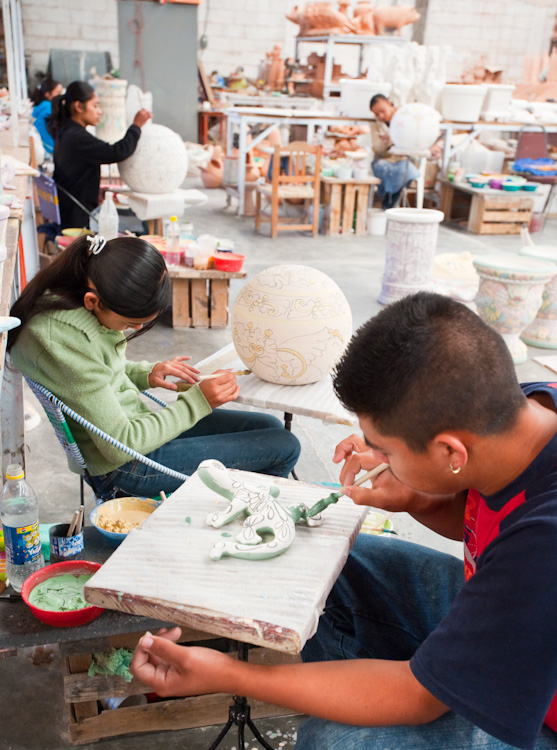 Artists decorating ceramics prior to firing.

Dolores Hidalgo’s ice cream though, is in a world unto itself. The central plaza practically overflows with ice cream vendors, each apparently trying to out do the next with exotic and unique flavors. Ever had avocado ice cream? How about tequila? Chicharron, fried pork skin, is a popular flavor and maybe some shrimp ice cream would go well after your meal of camarones al mojo del ajo: garlic shrimp. 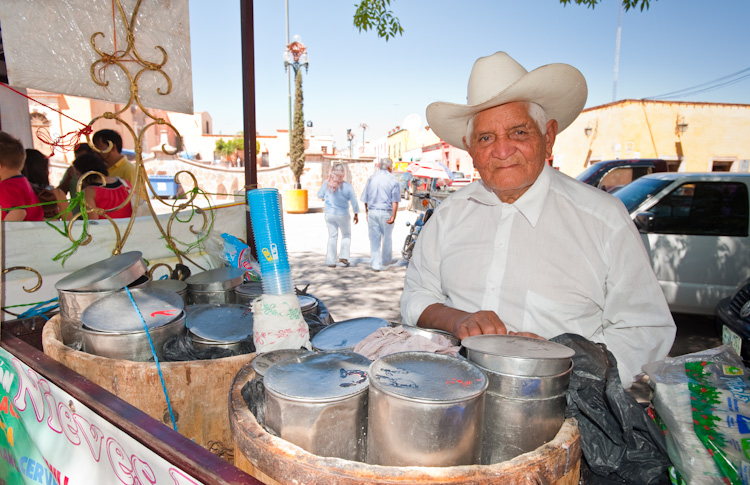 Moving yet closer to San Miguel de Allende, Atotonilco, “place of hot waters” is a popular day trip. The Santuario has been called the “Sistine Chapel of the Americas”. Its walls and ceilings are covered with a “riotous outpouring” of folk art frescos. Unfortunately, the murals have deteriorated drastically, but with the coming bicentennial of Mexican independence in 2010, teams of conservators are painstakingly restoring the interior of the shrine to its former outlandish glory. 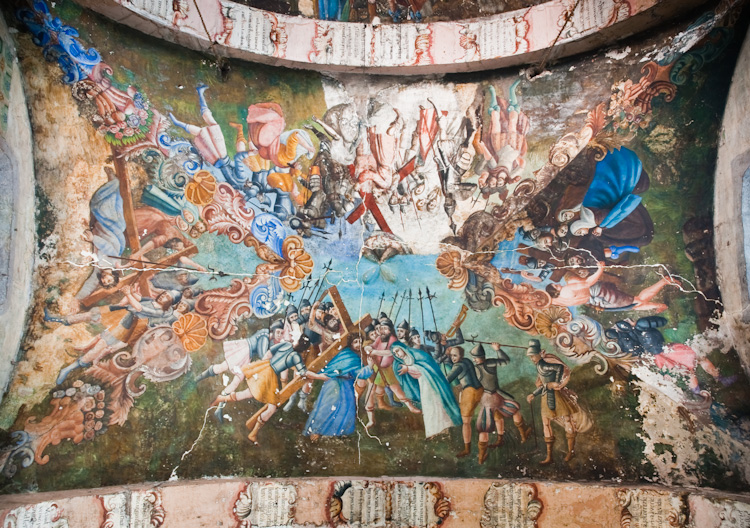 The as yet unrestored ceiling in the Santuario of Atotonilco. 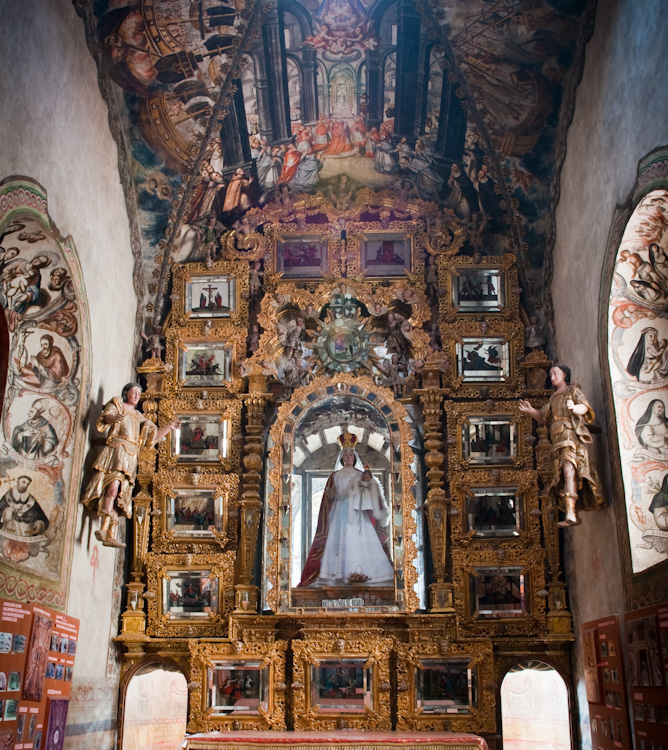 One of the several ornate altars in the Santuario.

Devoted pilgrims come from all over Mexico, swelling the population of this tiny town by thousands for much of the year, to crawl on bare, bloodied knees around the Santuario, to sleep in bare stone cells, and flagellate themselves with whips. I saw several men walking around with crowns of thorns loosely wrapped around their heads

Finally, an hour to the southwest lies Queretaro, the capitol of Mexico in the mid-1800’s when American troops invaded Mexico City. The Treaty of Guadalupe Hidalgo was signed here in 1848, ceding half of Mexico; California, Texas, Arizona, New Mexico and parts of Utah, Nevada, and Colorado, to the U.S.. In 1867, the hapless, Habsburg Emperor of Mexico, Maximillian I, a somewhat naive Austrian Archduke installed by the French, was captured and brought here to be executed, ending his tragic, three year reign.

Clearly, history walks the streets and roads of the region instructing those who would listen, speaking of tragedy and hope, fortune and struggle, ever-present within the rich culture of the Mexican people.