Arriving In An Oasis of Tranquility 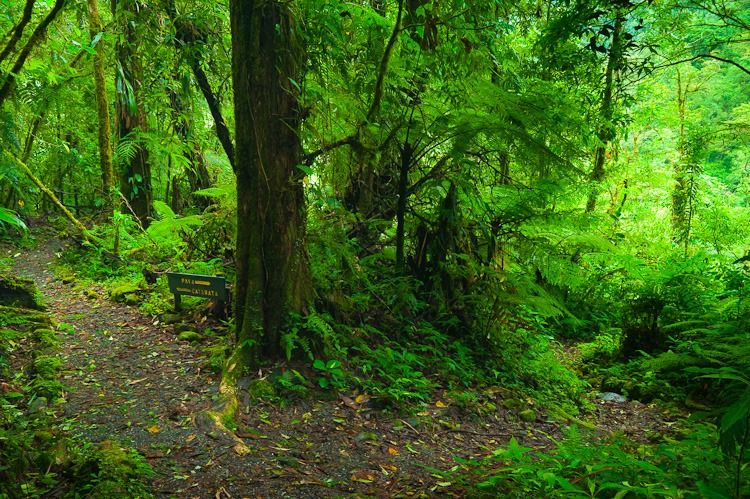 You would have thought that, of all things, after a five hour red-eye flight they would have served coffee. It is 6 AM in Costa Rica, 5 AM Colorado time, and the only thing offered is water. This is going a bit far in the cost cutting, especially when flying to the land of coffee. How much could it possibly cost to serve a measly cup a coffee?

Customs is easy and bleary eyed, Yolanda and I are outside waiting for someone from Tricolor Car Rental. Recommended by a friend, it costs fully half of what the big boys wanted. We are quickly picked up and whisked off to their office to rent the gutless wonder of a Daihatsu Terios 4W drive.

Also, not having been served the typical stale, airplane omelet and unripe, canned fruit cup, not to mention the coffee, we head to Denny’s down the street; standard Denny’s breakfast fare at double American prices.

Having over-filled our bellies in anticipation of a nap instead of lunch, we begin the ordeal of finding our way through the unmarked streets of San Jose Centro at rush hour.

In Costa Rica, directions are generally given using landmarks and there’s an expectation that everybody knows them: at the park, go two blocks and turn left at the gas station, turn right at the hospital, go one block and turn left, at the mall drive under the bridge and…etc.. There is precious little signage to something as important as the only road south, Ruta 2, the Pan-American Highway.

Street names appear grudgingly every 5-6 blocks inscribed high up on a building, sometimes in the middle of the block, sometimes near the corner. Just enough to let you know, when you are able to stop and consult the map, that you did miss that turn at the gas station.

Combine this with crazy drivers, aggressive motor bikes, lanes suddenly ending, busses blocking traffic to pick up passengers and pedestrians crossing when and wherever, and it is very challenging finding your way through town where finally, thankfully, signs to Cartago and Ruta 2 appear. 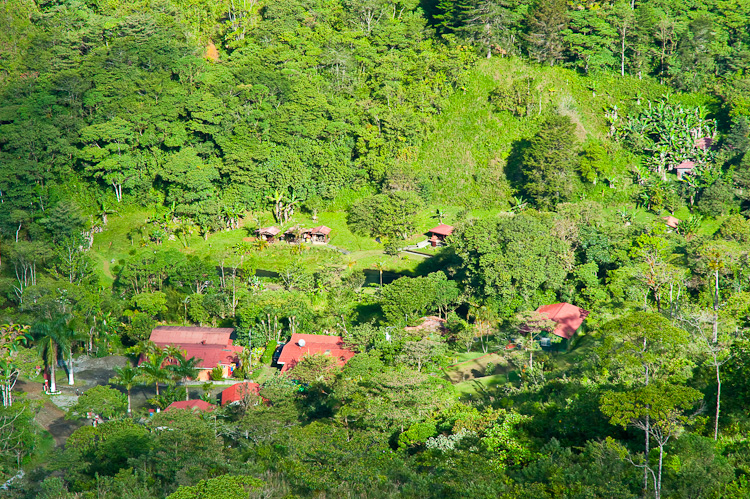 Our goal is Kiri Mountain Lodge Tapanti’, a lovely remembrance from our trip four years ago. It lies at the end of the road on the doorstep of Tapanti National Park. Tapanti is a vast, wild, inaccessible swath of primary cloud forest and jungle that, in combination with other Parque Nacionales, stretches from here, more than one hundred miles into Panama. These comprise the entire southwest quarter of Costa Rica between the Pan-American Highway and the Caribbean. 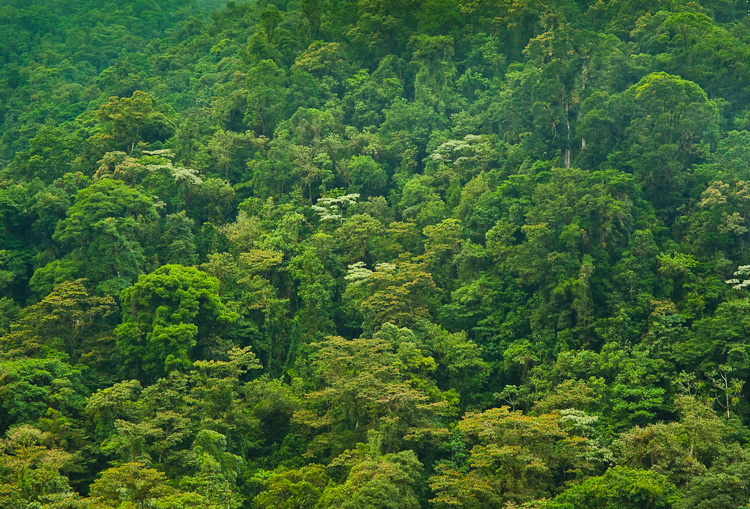 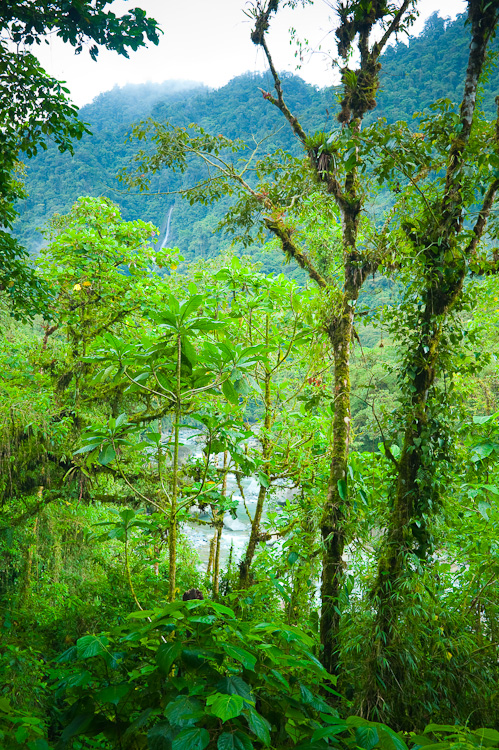 A waterfall in Tapanti’ National Park. 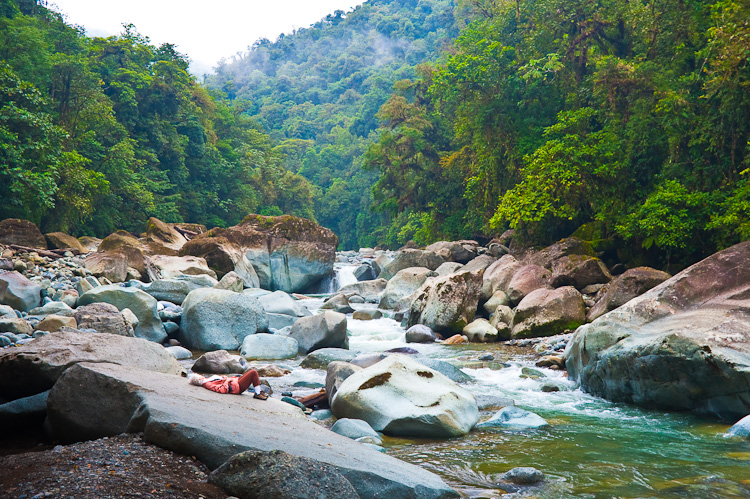 Yolanda relaxing on boulders along Rio Tapanti’, a kayakers dream when full

Difficult terrain is a gross understatement. Mountainous to the extreme, Tapanti is incredibly dense, primordial forest with only a couple of relatively short trails open to the public. Access to the rest is limited to scientists. Biodiversity is enormous.

The narrow two-lane road wends it’s way steeply down the mountain through lush terrain dotted with trees filled with bright orange blossoms. These give way to groves of shade grown coffee; low coffee bushes beneath towering, widely spaced trees. The road passes the charming town of Orosi, a place we explored on the previous trip. 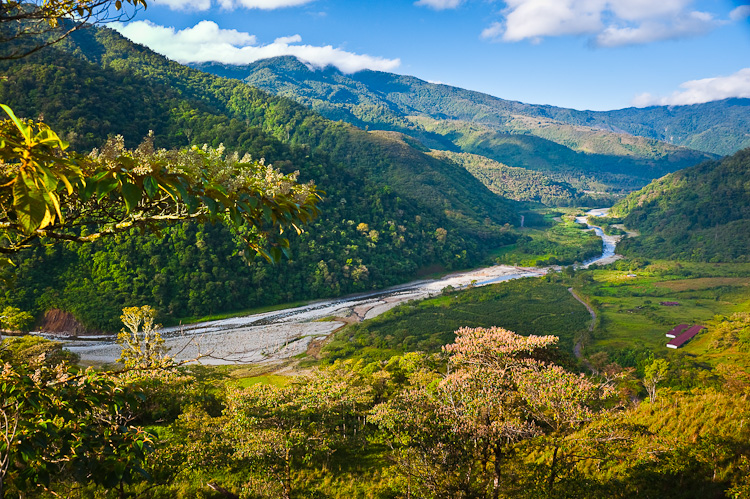 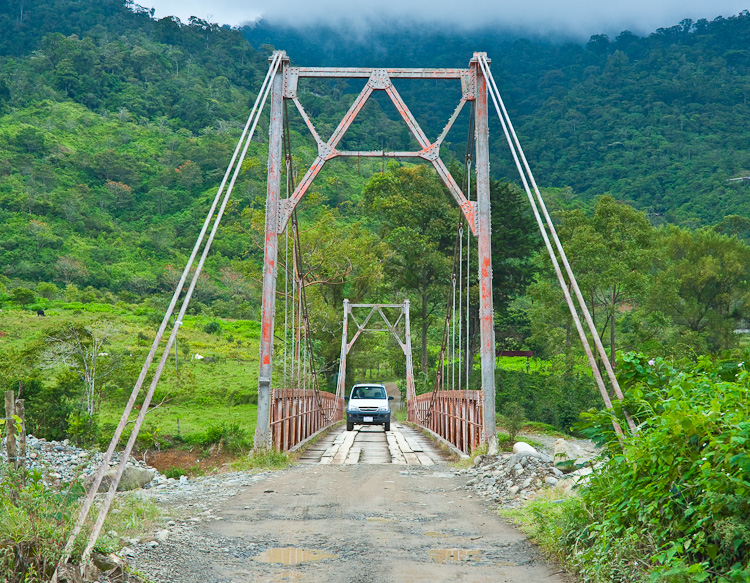 The bridge of Rio Tapanti’ and our gutless wonder

Using faith and experience, I follow the widely separated signs leading to the potholed, dirt road which takes us the final eight kilometers to the one-lane bridge spanning the river and to Kiri Tapanti Lodge and its trout ponds. The lodge is nestled within the head of a stunningly lush, steep valley. With clouds blanketing the surrounding mountain tops it is drenched in tranquility. 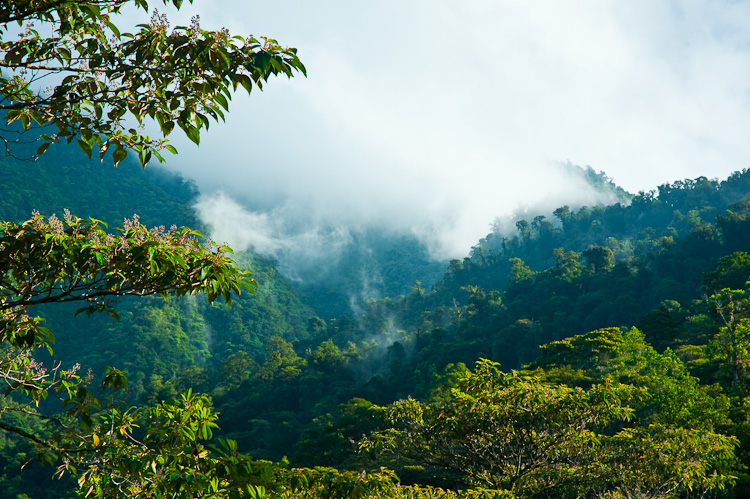 The head of the valley above Kiri Lodge

First, a brief sojourn on the veranda basking in the gentle sounds of the river mixed with calls of exotic birds while watching fog wraiths appear and dance their brief existence along the mountain tops. Then, I have the most deliciously long nap I’ve had in a long time.

Afterwards, in the lodge’s new, open air veranda, with rain gently falling on the forest outside, I have my first, much needed cup of robust Costa Rican coffee.