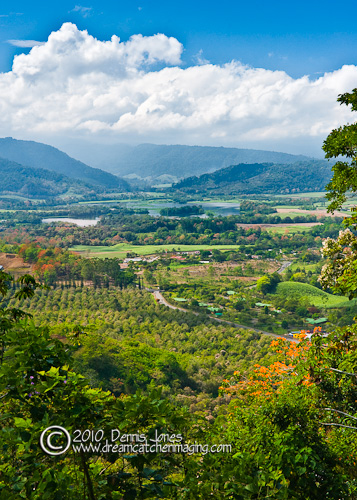 The landscape around Turrialba from the Turrialtico Lodge

After leaving the relative coolness of Amy’s farm, Yolanda and I head to the surf town of Playa Dominical. Amy and other friends told us of the ecological preserve of Hacienda Barú, just across the river from Dominical.

We bump and grind our way over the last, few, unbuilt kilometers of the Coastanera, Costa Rica’s new coastal highway. The Coastanera is a god-send, as is the brand new highway linking San Jose and the airport to the Coastanera. With the completion of these last 4 kilometers, it will be possible to drive on a very good highway all the way to Panama.

Previously, access to the Pacific beach resorts and to southern Costa Rica, necessitated navigating the chaos of San Jose and over two mountain ranges. 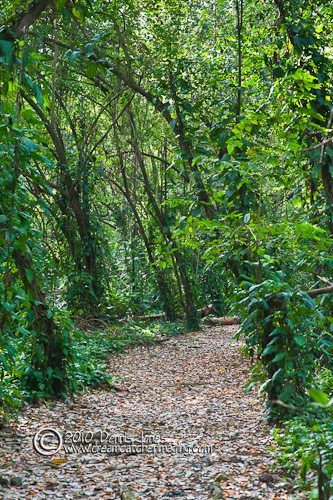 The trail to the beach through the secondary forest of the preserve.

Upon checking in at Hacienda Barú, http://www.haciendabaru.com/ ,I meet a bit of a legend; Jack Ewing, a Coloradan born in Lamar who, after graduating from CSU, came down to Dominical to run a cattle ranch. That was 1972.

It didn’t take him long to fall in love with the complex and valuable ecology of the area. With the support of his wife, Diane, he has devoted his life and those of his family, to returning the land to its natural state.

Over the decades, what once was pasture, is now dense forest filled with monkeys, coatis, sloths, birds, and yes, deadly snakes.

Jack’s vision, combined with the foresight and financial resources of Pennsylvanian Steve Stroud, enabled Hacienda Barú to be decreed a National Wildlife Refuge. It is a link in the Meso America Biological Corridor, an international attempt to restore a continuous stretch of forest between North and South America. This enables animals, especially large mammals like Tapirs and Jaguars, to once again roam over range sufficient to their needs and increase their endangered populations.

Our cabin is quite nice, with three bedrooms, a kitchen and living room. Only $68 for two people. There’s a restaurant and pool, beautifully maintained gardens, several kilometers of private beach and the adjacent preserve. 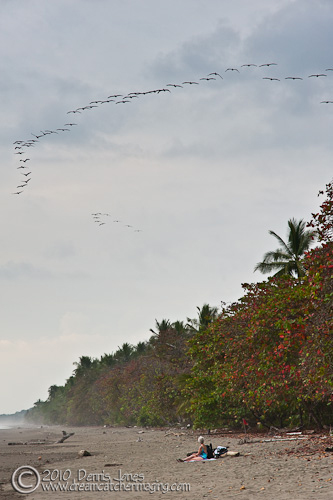 The deserted beach at Hacienda Baru’ and only part of the largest flock of pelicans I’ve seen in my life, at least 80 pelicans!

A short hike to the beach through the reserve brings us face to face with a troop of White-faced Capuchins, the smallest of the monkey species in the area. Scampering and jumping through the trees as they forage, they show no fear of humans. A group of perhaps a dozen Coatis, a raccoon-like animal, their 24” tails straight in the air, follows beneath, scarfing up what the monkeys drop. 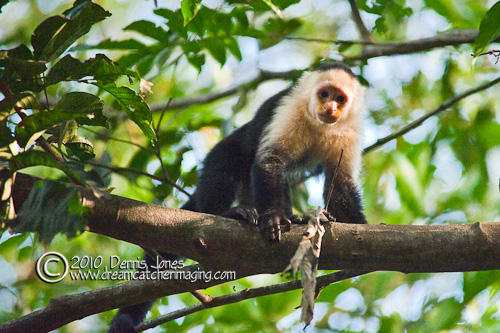 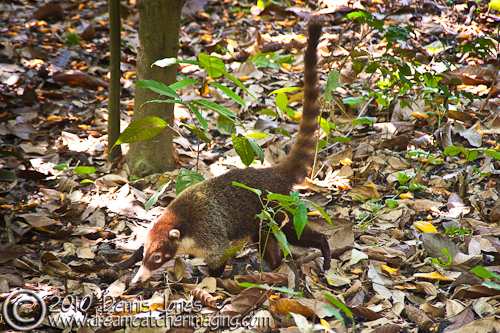 A Coati forages beneath the monkeys.

We still have a broken passenger window so only spend one night. We make reservations for the following week and head back over the mountains to San Isidro. Tricolor, the rental agency, sent the window to a body shop there and within twenty minutes we are on the road.

Heading back into the mountains, the Mirador Valle de General, http://valledelgeneral.com/valledel/, beckons. Another remembrance from the previous trip, it offers clean, very private, inexpensive cabins with breakfast and a restaurant with killer views of the valley. A lovely Tico family owns the lodge. Dinners are reasonable and I have a trout in lemon sauce for $8 that is divine. 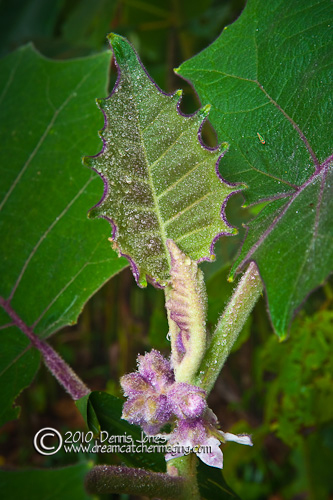 Detail of a plant in the forest preserve of the Mirador Valle de General.

After two, relaxing nights, we head north over the mountains and then east to the city of Turrialba. Passing through Cartago once again, we travel in heavy traffic on a winding, two lane road along the flanks of Volcan Irazu. The decent into a warmer climate is through extensive fields of coffee and sugar cane. We wonder at the large farms completely covered in black, shade material, later learning that they raise house plants.

Just before arriving in Turrialba, we follow a sign to a hilltop hotel, Hotel Valle Verde. Perched high up on a mountainside, it offers front row seats to Volcan Turrialba’s latest eruptions. For only $21 a night, we have a large room with wrap around windows and an open air sitting room. Toucans and many other birds inhabit the trees outside our windows.

Once again, we have the entire hotel to ourselves. Turrialba woke from it’s slumber a week or so before and blew a big cloud of ash miles into the air, covering the upper elevations in a gray shroud. The eruptions now prove to be little more than a column of gray smoke rising into the sky. 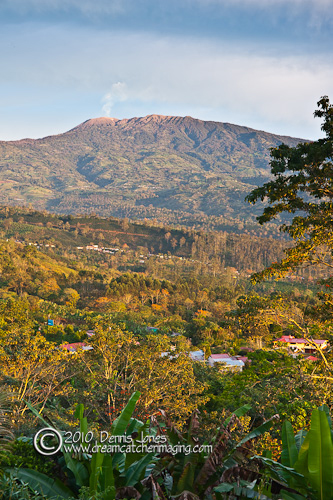 As dusk arrives, the lights of Turrialba below and those of the pueblos on the mountainside of the volcano come alive, sparkling in the darkness. Seeing as how the restaurant is closed mid-week, we drive to another hotel listed in the guide books, the Turrialtico Lodge, http://www.turrialtico.com/  It is situated on the opposite , eastern side of the large valley. Also on a hilltop, it offers a sweeping view of the city with the volcanos behind. It’s lovely, open air restaurant serves us breakfast. I take advantage of their wifi to call via skype and deal with American Express who offered us supplemental auto insurance when we used their card. 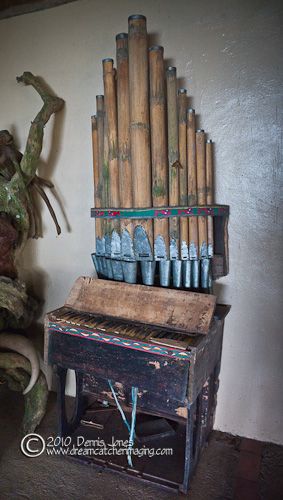 An amazing pump organ with bamboo pipes at the Turrialtico Lodge.

The afternoon is spent exploring the lush campus and botanical gardens of CATIE, the Centro Agronómico Tropical de Investigación and Enseñaza, one of the premier biological research facilities in the world. http://www.catie.ac.cr/magazin_ENG.asp?CodIdioma=ENG 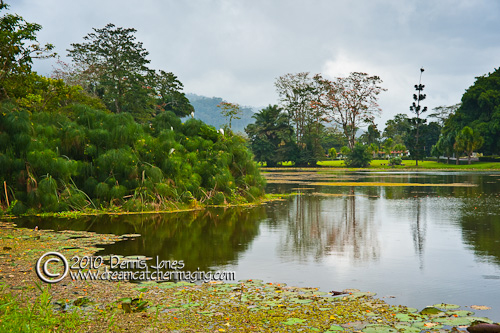 The campus at CATIE.

Driving through the extensive orchards is edifying. Who knew there are over twenty species of Cacao from which chocolate is made? As well, the huge collections contain numerous species from around the world of Palms, Guayaba, Macadamia, Mango, Bamboo, Coffee and exotic trees. 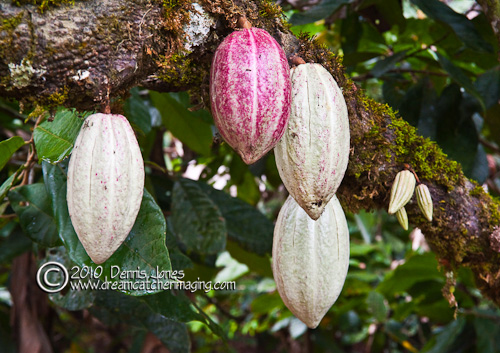 The addictive fruit of the Cacao tree. 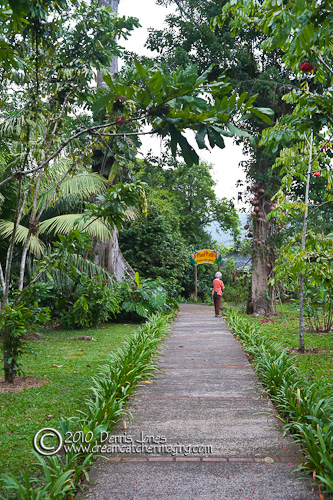 A path in the botanical garden. 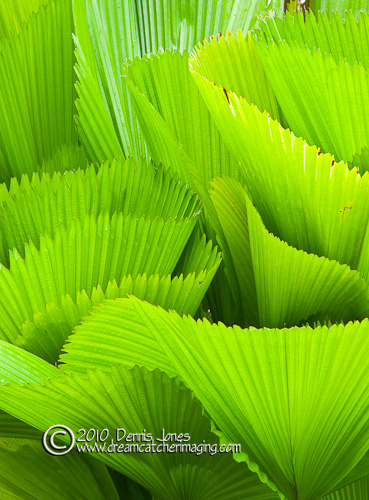 One of the many species of palm at CATIE.

After wandering around the beautifully, landscaped campus and its lovely lake whose trees and lily pads are filled with egrets and many other birds, we stumble upon the cafeteria and have a wonderful meal for very little money.

Rain falls as we return to the Hotel Valle Verde. We settle in for the night in anticipation of the following day’s long drive through San Jose and down the coast to Hacienda Barú.