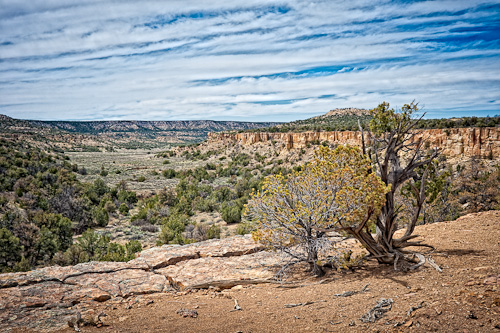 We were fortunate to be invited to hike Ed Wagner’s Rincon Ranch along with the Arizona Trailblazers, a Phoenix based hiking club, www.azhikers.org. Kay Lyons, Ed’s significant other, is a friend and knew we’d enjoy the outing. We had heard about Ed’s ranch for a while now. This was the opportunity we had been waiting for.Rincon Ranch evolved over many years when Bert Cox, the original rancher, began acquiring land in the early 1900s. He accumulated and consolidated a number of ranches in eastern New Mexico. Ed bought it in 2000 primarily as a retreat; thirty-two square miles of retreat. Ed spent his career in factory management, principally for Intel. Upon retirement, he began looking for land in the west and through a friend, happened upon this vast stretch of canyons and mesas just east of the Arizona border.The view from the lodge.

The land is dry; no year round or seasonal creeks, but it contains abundant flora and fauna. Piñons, Junipers, Ponderosas and Cypress grow profusely in the canyons and on the mesas. Fox, Badger, Bobcat, Bear, Coyote, Deer, and Mountain Lions, even Mexican Wolves, call it home. Herds of Elk roam freely, allowing Ed to bag a huge, six point bull last fall.

Ed is working to return the flatlands of the ranch from over-grazed ranch land into a wildlife preserve. He’s adding dirt tanks, wells, and access roads. Ed’s dream is to develop the ranch as a destination for hiking, mountain biking and trail riding as well as a hunting destination during the fall hunting seasons. 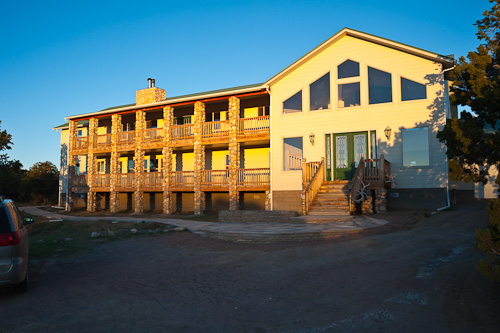 At night, not a single light can be seen from the spacious lodge Ed built to host groups. The night sky at 7,000 feet is as black and star-filled as anywhere in the west. As well, silence is profound. Not a sound can be heard save that of the occasional breeze moving among the trees or the distant calls of a pack of coyotes. 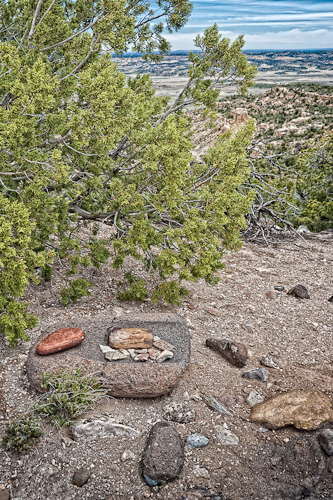 For centuries, Indians from the Membres and Zuni tribes lived on and migrated across this land of abundant wildlife, berries and roots. Their footpaths enabled trading between villages.

Rincon Ranch lies on the Colorado Plateau, once sea floor millennia ago. It is now uplifted over a mile above sea level. Hikers have come across pieces of petrified wood from the ancient forests that covered the area when it was not covered by oceans.

Erosion has created vertical cliffs of red and golden sandstone and exposed deposits of coal and pure white limestone. Relatively recent volcanic activity can be found in volcanic pipes that spewed lava and pyroclastic flows across the landscape millennia ago. 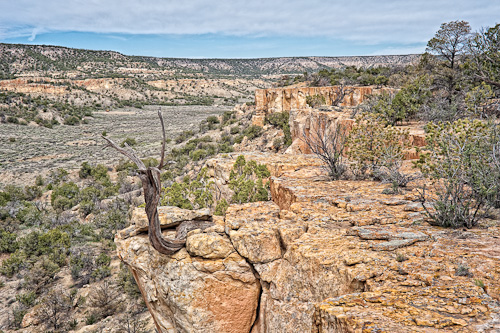 Looking into Zuni Canyon with Porter’s Knob in the distance

A six-hour drive finishing with eight miles of good gravel road brought us to the lodge. Having car pooled, a group already was ensconced in the kitchen preparing dinner or going over topo maps, planning tomorrow’s hike. From the first, everybody was convivial. Kay showed Yolanda and I our room whose windows took in a dramatic panorama looking down into a canyon and far out to distant mountains toward the southeast.

Everyone shared food as well as the cooking and cleaning. Kay had come up with a bit of a schedule as people offered to bring their favorite dishes. With dinner over and we turned in early in anticipation of tomorrows hike.

Breakfast was at seven but not realizing the time change, Yolanda and I made it down at eight. No worries. No one was upset and we quickly ate and prepared for our first day of scouting trails. The goal today was to hike Perry Canyon to where a wash came off the mesa; find a good way back up onto the mesa and then back to the lodge. 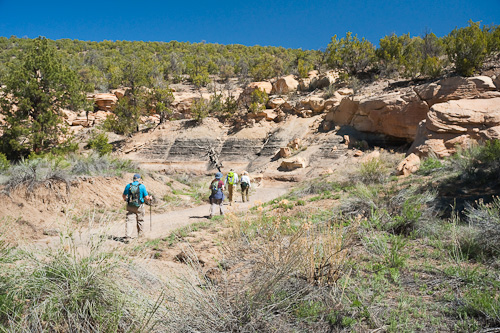 The beginning of the hike into Perry Canyon 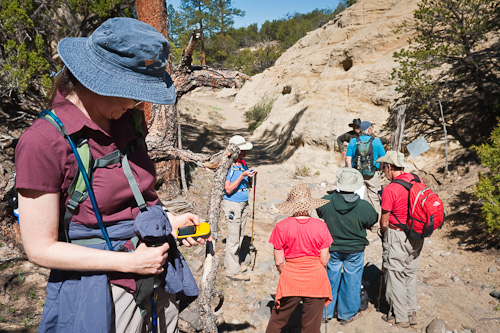 Wendy checking her GPS and setting a waypoint.

Several of the group had GPS’s. They set waypoints as we hiked allowing our track to be saved and a map of the trail made. As we gradually descended, the richness and diversity of the land was evident. Large Ponderosa Pines towered over the wash, dense stands of Piñon Pines grew in wild profusion; a Bobcat’s delicate step left imprints in the sand. 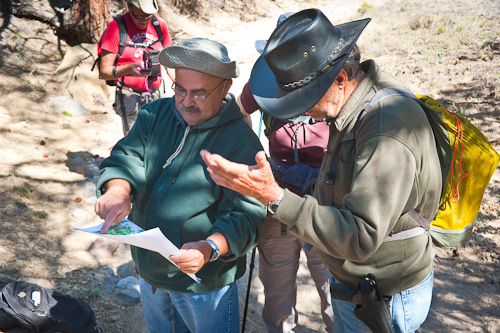 Gary and Ed checking the map, trying to figure out where we turn to go up the correct wash. 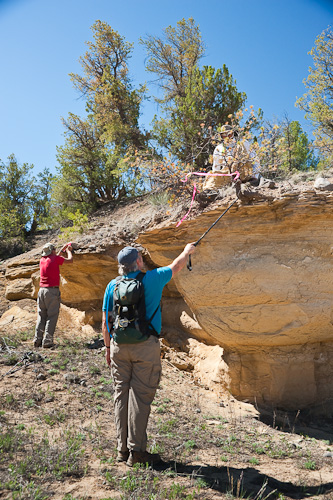 Michael helping Carlton place a flag as Bill ties another at the entrance to the wash.

Turning up a small wash, not the one we were looking for as it turns out, we eventually climbed our way up to the expansive views provided by one of the mesas. It being lunchtime, we stopped, ate, and christened the spot Trailblazer Point. 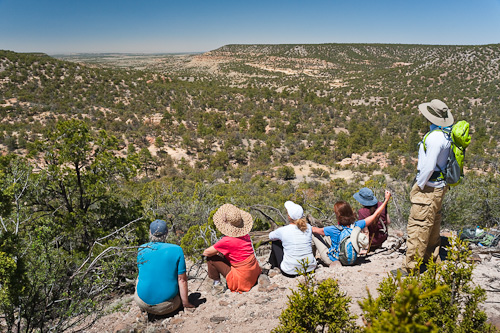 We made rock cairns and flagged the path along the mesa top through the maze of widely spaced trees. Tiring of the flats, we found a way down into another wash where we spotted a four-foot snake, not a rattler thank goodness. As the wash narrowed and got choked with fallen trees, we found our way out and onto one of the access roads Ed had built. This being the Windmill Road, leading to a site planned for a wind energy farm. 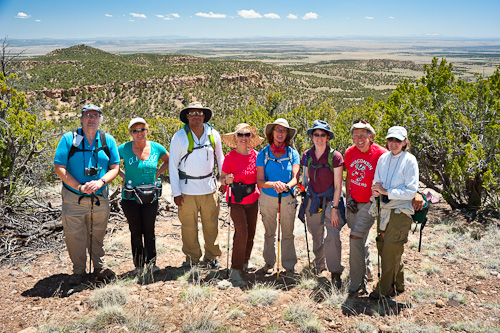 Michael, Wendy, Carlton Yolanda, Kay, Wendy, Bill and Linda at a dramatic overlook to the southeast as we connected to the Windmill Road.

A short mile walk took us back to the lodge. After our slow five miles and about five hours of hiking, many took naps or simply relaxed and read until dinner.

Soup is the planned meal. One woman brought a wonderful lentil and bean soup and I brought split pea soup. Along with salad, cornbread, wine and the wonderful company, we had a great meal. Especially when it was followed by Yolanda’s deliciously tart lemon chess pie. With the table cleared and dishes done, it was time for games before bed.

The next morning saw another beautiful, blue-sky day. Today’s hike was to be along the cliffs of the penisula above Zuni Canyon to a knob with panoramic views and Native American artifacts. From there we were to then find a way down into the canyon and end up in the small box canyon Kay calls the Swimming Pool. 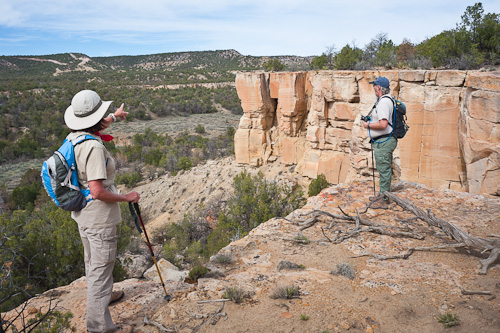 Kay and Michael along the edge of Zuni Canyon at the beginning of the hike. 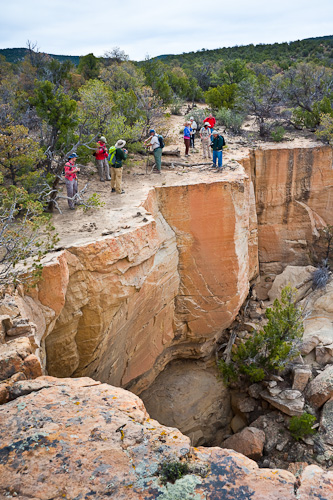 The weather was lovely, perfect temperature for hiking. We quickly found our way to the cliff edge, following its zigs and zags while watching the other side of the wide canyon for wildlife. Making cairns and tying trail markers on trees as we hiked led us to an interesting wave formation where the rocks had eroded in sweeping curves.Kay and Ed entering The Wave. 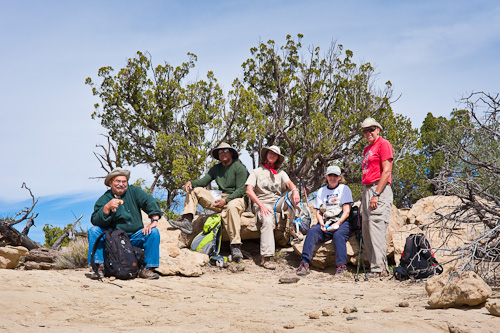 Gary, Carlton, Kay, Linda and Bill taking a snack break atop The Wave. 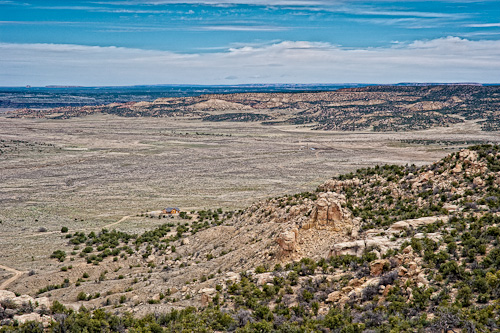 Looking to the northeast and The Hermitage (lower left), a cabin built for retreats, from the knob.

Lunchtime again brought us to Porter’s Knob, a spot with sweeping views. The Indians had obviously used this knob in the past. Several matates, grinding stones, lay about as did numerous pottery shards, some with intricate black and white designs and obvious very old. It is easy to imagine hunting parties coming to this spot over the centuries. With its panoramic views to the south, west and north, it would’ve been easy to spot game, while an abundance of nuts and berries provided sustenance.

Following lunch, we had to find a way off the knob and into the canyon. Again, marking trail as we went, I found a slight depression that led to a part of the cliff from which rock falls had filled in a way down. After only the smallest drop of 3-4 feet, we were able to pick our way among the rockfall eventually leading us to a nose of soft dirt and shale, allowing a relatively easy access to the canyon bottom. 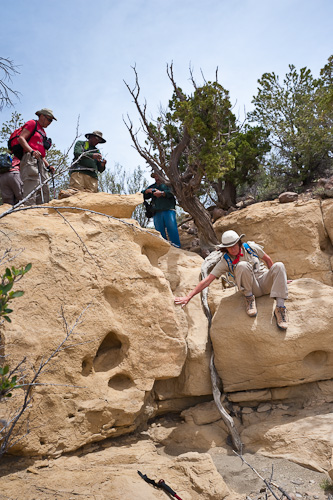 Kay making the drop on the route down into Zuni Canyon. 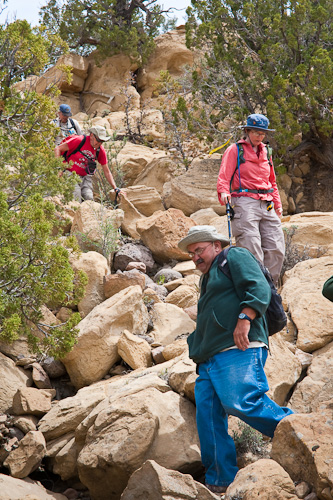 Gary, with Wendy and Bill behing, negotiating the rockfall after the drop. 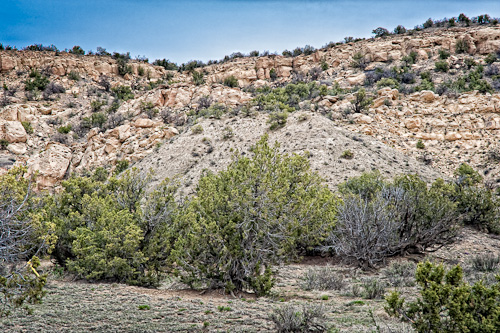 The nose of soft shales and the route into the canyon above.

From here, it was an easy, flat hike as the canyon gradually narrowed into a winding, sandy wash that took us to the swimming pool in no time. This is a true box canyon and the steep canyon end, though not very high, stopped our progress. Water from the previous week’s snowfall filled a small tank carved into the cliffs and forlorn pools beneath overhangs provided water for the animals. 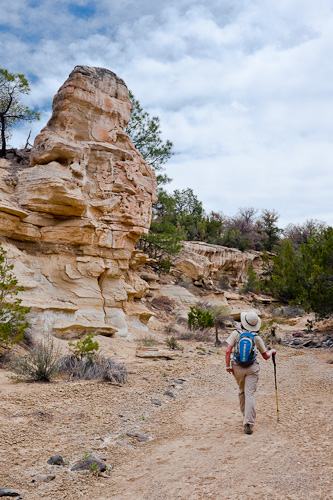 Kay, as the canyon narrows, leading the way toward the Swimming Pool. 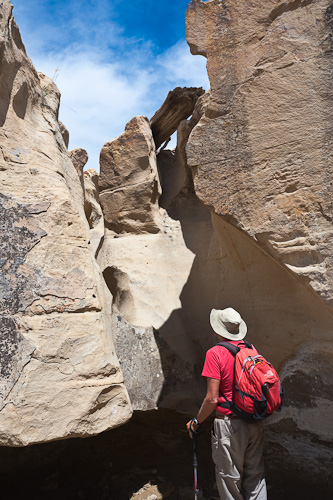 Bill, at the deep end of the Swimming Pool, trying to figure a way out.

Backtracking a hundred yards or so, led us to an easy route out of the Swimming Pool and onto the road above, where our vehicles waited, returning us to the lodge. 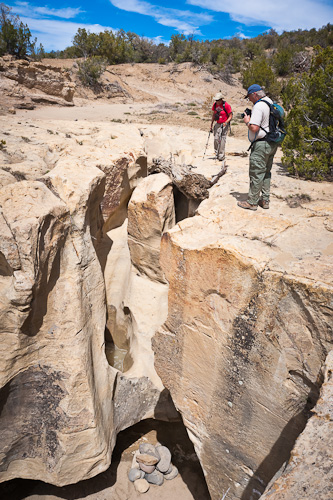 Michael and Bill looking into The Deep End. Rocks that Bill and Carlton carried and set up as a possible step are below the small tank of water.

Dinner that night was from Ed’s 6-point bull. Elk meat is so very lean. Not one bit of fat. Having been prepared properly immediately after it had been killed, there was not a hint of gaminess; just rich, flavorful protein.

The final morning, everyone gathered his or her things. Some were leaving later in the day staying to do another hike. We left after breakfast, making the long drive back to Scottsdale. 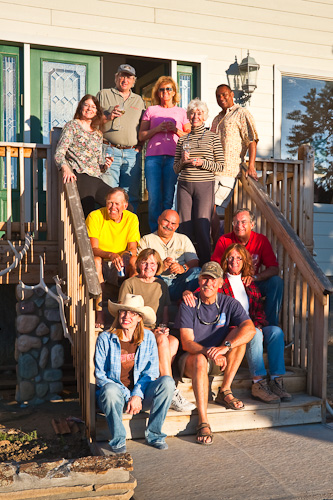 It was a truly rewarding few days. Not only did we experience a part of the west few people, other than the ancients, ever get to see, but we made good friends as well. Yolanda and I are looking forward to our next sojourn in Scottsdale and hooking up again with the Arizona Trailblazers. There are many new places to explore and new areas, reachable only by foot, to experience. 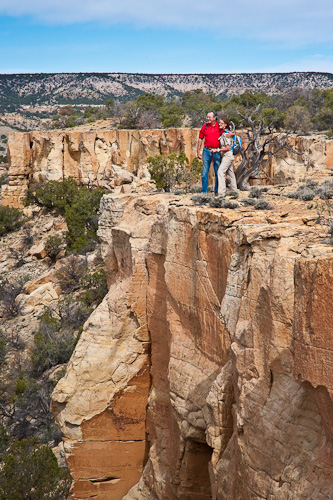 Ed and Kay along the rim of Zuni Canyon.