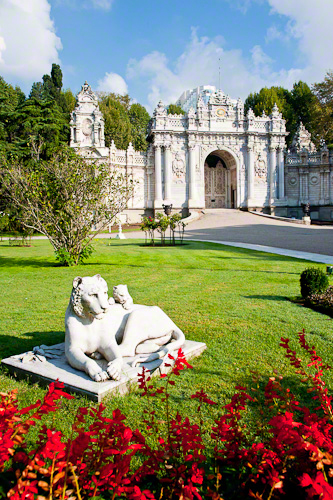 The entry to the European style Dolmabahche

I’m near exhaustion. Serkan, though, shows no signs of slacking. It’s been two days of intense touristing and after rising at 4:30 am, our group is on a plane bound for Izmir. Serkan, our guide, is the energizer bunny. His shiny pate matches his disposition. He exudes hospitality. 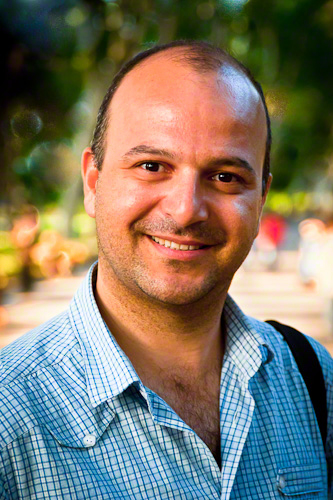 Yolanda and I are touring with eight others; Allan Grinnell and his wife Feelie Lee, both professors at UCLA: Frank Sanitate, a speaker on time management and his wife Terre, who works with interfaith groups: David Finkel, a retired judge and constitutional law professor and his wife Israeli-born, Bruria, an accomplished artist www.bruriafinkel.com:  Cem Eruyan, born in Turkey and now living in LA: and Casey Crosbie, the youngest of the group who grew up herding cattle on a ranch in South Dakota, now traveling the world. We are on a cultural exchange sponsored by California’s Pacifica Institute; a group of Turkish Americans seeking to build bridges of understanding between peoples. During an introductory dinner we learned that our proposed itinerary, along with our preconceptions about Turkish customs, could be thrown out the window.

We rise early the first morning for a typical Turkish breakfast of tea, bread, honey, olives, cheeses, tomatoes and cucumbers, and are to tour the Dolmabache Palace before the hoards of tourists arrive. 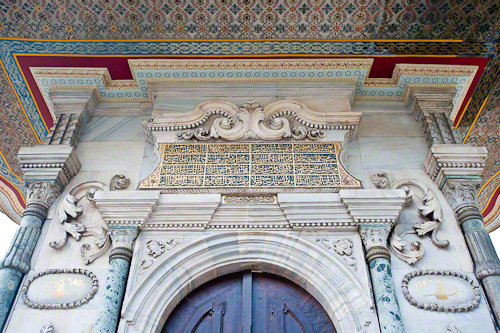 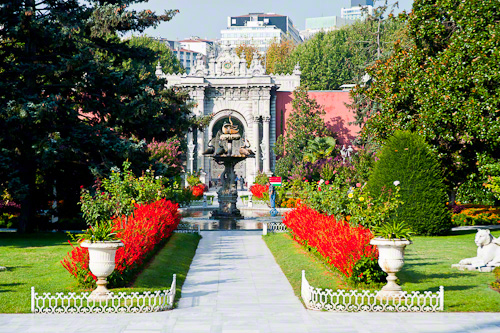 This is our first taste of Ottoman opulence. Built in the mid 1800’s it is an entirely European edifice: think Paris Opera. The palace is an enormous complex of lavishly decorated state and private rooms, 285 of them, set majestically along the Bosphorus. The Ceremonial Hall is an eye-boggling work of decadence. Its vast dome supports the largest crystal chandelier ever made, weighing 4.5 tons and containing 750 lights. Three thousand artists spent 3-4 years completing the gilt, faux marble and elaborate flourishes of this gigantic room alone. And yes, the Sultan mortgaged his empire to build this architectural masterpiece. 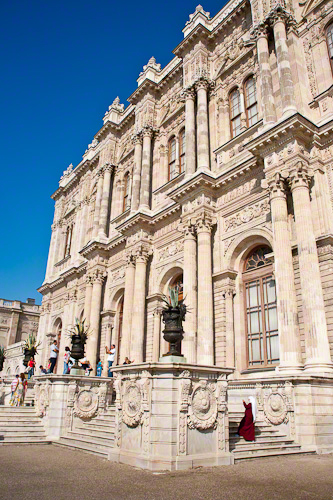 The small part of the south facade outside the Ceremonial Hall, facing the Bosphorus 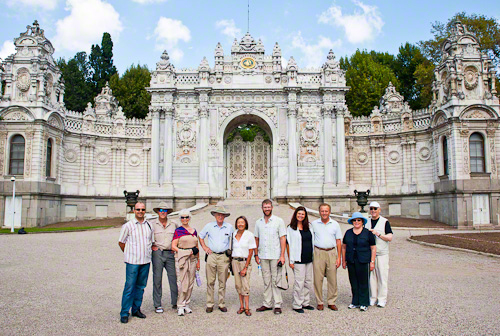 In front of one of the opulent gates, the first of many group photos. Serkan, I and Yolanda, Alan and Feelie, Casey, Terre and Frank, Bruria and David. Cem’s taking the picture.

The Jewish Museum is next on the itinerary. 700 years ago, when the Spanish were driving out or forcibly converting Jews, the Ottoman Sultan welcomed them to his empire. Jews from around Europe and Russia found refuge over the centuries. A thriving community exists today. The museum, in a lovely, old synagogue, documents Jewish life in Ottoman and contemporary Istanbul. It is an eye-opening look at religious tolerance under Islam. 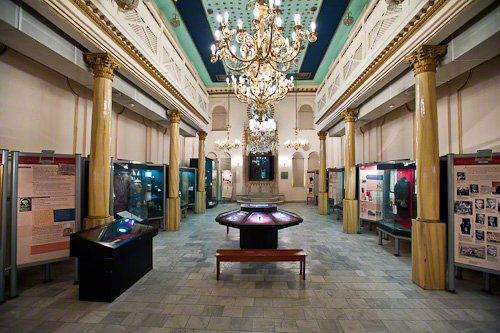 The interior of the old synagogue now the Karakoy Jewish Museum 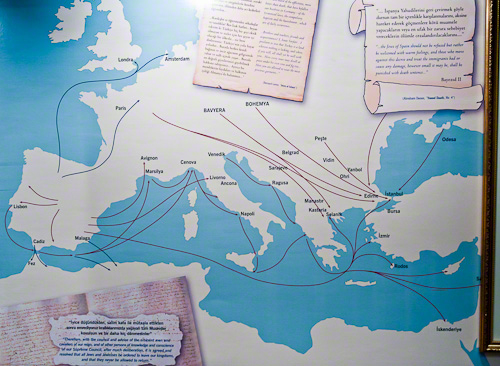 Jews from around Europe sought refuge in Ottoman Turkey. The 1492 decree of Bayezed II in the upper right reads: “…the Jews of Spain should not be refused but rather be welcomed with warm feelings, and those who move against this decree and treat the immigrant bad or case any damage, however small it may be, shall be punished with death sentence…”. Referring to the king of Spain, the Sultan also stated: “You venture to call Ferdinand a wise ruler; he who has impoverished his own country and enriched mine!”

An afternoon of perfect weather calls for a tour on the Bosphorus. For several hours we cruise between Europe and Asia. High hills, covered with dense forests of trees and apartments, rise on both sides. Tiny, quaint harbors dot the coast. 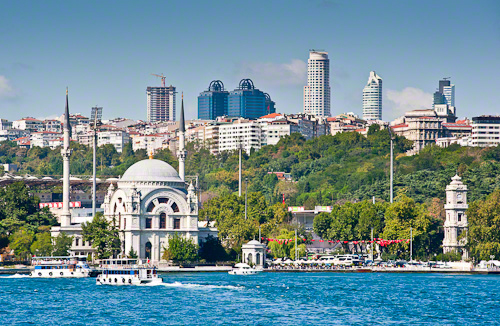 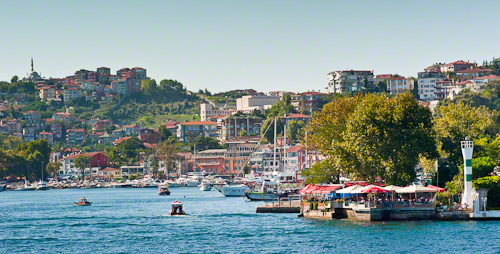 We pass beneath the impressive Bosphorus and Fatih Sultan Mehmet bridges like San Francisco’s Golden Gate but for the elegant mosques, high, labyrinthine, stone walls of Byzantine fortresses and the fact that they connect the continents of Europe and Asia. 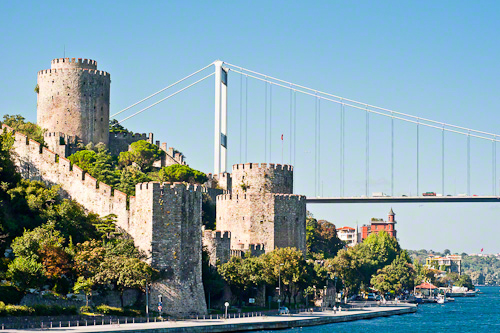 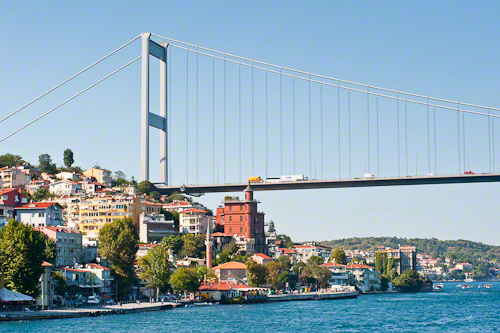 Afterwards, we want rest, but are to join a local family in their home for dinner. We also need to gather the gifts we’ve brought for them. But no, we’re late and traffic is terrible. Arriving around 8 pm, the family of four; father, an engineer, mother, a German teacher and their two beautiful daughters, fifteen and ten, show us true Turkish hospitality. Though they speak little English, we smile, laugh and share as Cem and Serkan translate. Loving-kindness abounds. Following Turkish custom, everyone in turn tells a little about themselves. 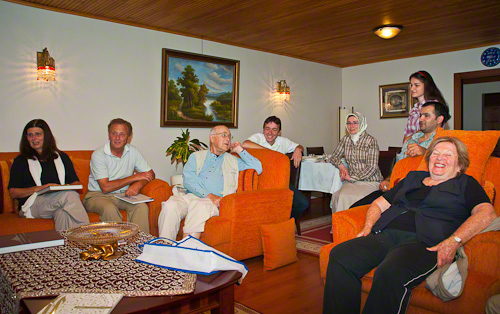 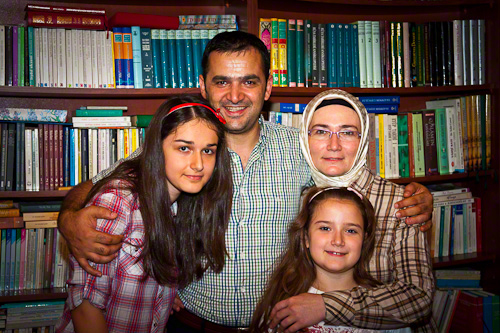 Vuslat and Hatice Aygun with daughters Zeynep and Zehra 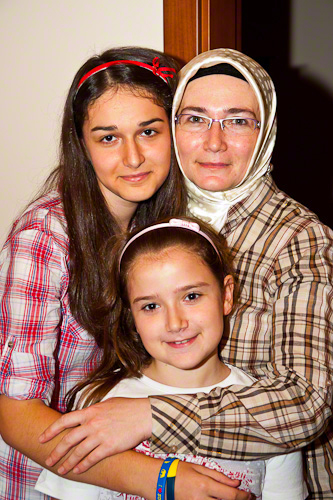 Dinner then begins with a delicious, spicy, lentil soup and ends with sweet, sticky baklava and copious amounts of tea. It’s now 10:30. I’m very tired, others seriously jetlagged. Presents though, are a must before we leave. Each of us receives a heavy bag of five, beautiful books about Turkey and Turkish arts and crafts. We’re overwhelmed and feeling badly that we hadn’t the time to pick up flowers let alone our presents for them. As we leave, they load us even more with boxes of Lokum, Turkish Delight.

The next day begins early as well. We have to beat the hordes to the Topkapi Palace, for hundreds of years the traditional home, harem and administrative center of the Ottoman emperors. 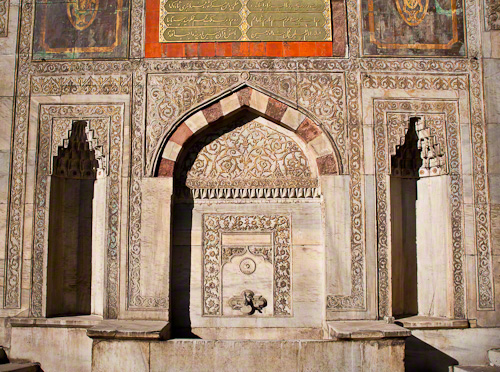 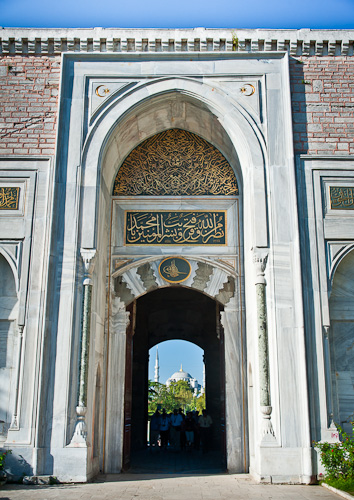 The Imperial Gate and main entrance to the Topkapi Palace 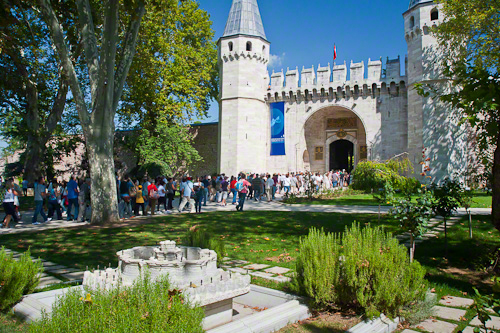 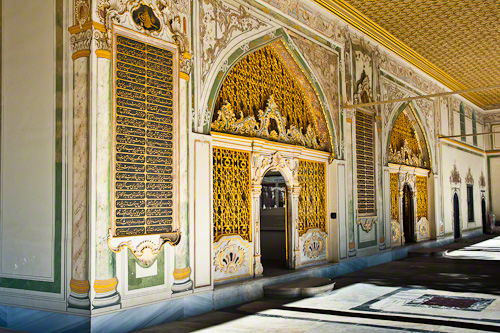 The Divanhane, where the Imperial Council met 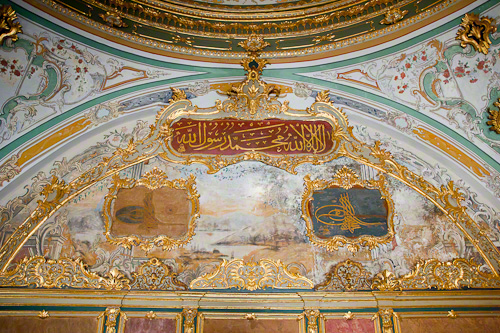 A multitude of magnificent marble buildings, each beautifully decorated with elaborate carvings and elegant, Arabic calligraphy, are spread along a hill overlooking the Bosphorus and the Sea of Marmara. The kitchens prepared as many as 6,000 meals a day! 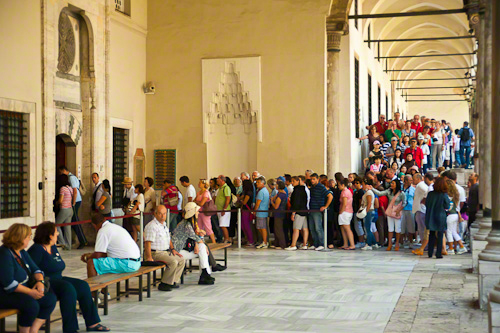 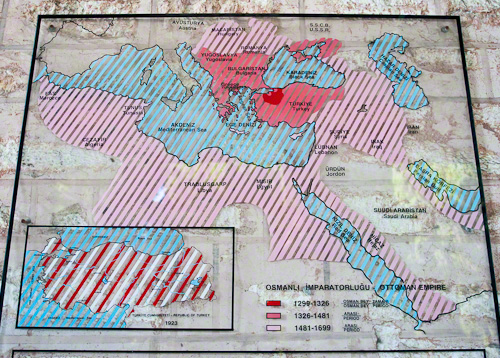 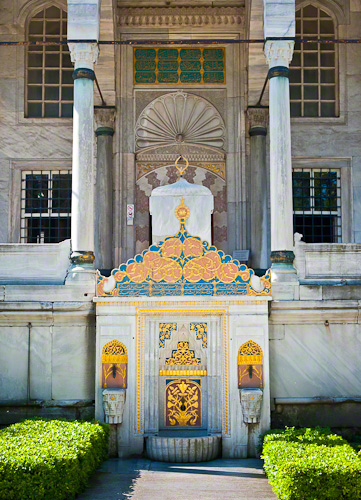 Here lie the crown jewels of Turkey. Displays of magnificent, emerald, ruby and diamond-encrusted golden chalices, swords, jewelry, dinnerware, and toiletry sets line hall after hall. A highlight, the Spoonmaker’s Diamond, is an eighty-six carat monster the size of a small egg set in silver and surrounded by forty-nine multi-carat diamonds. 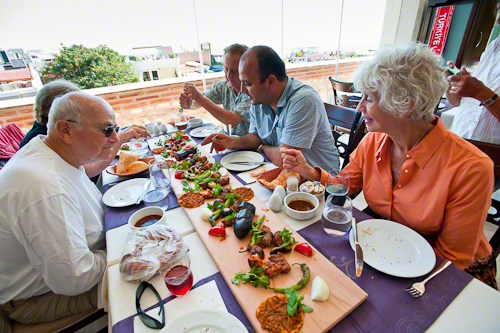 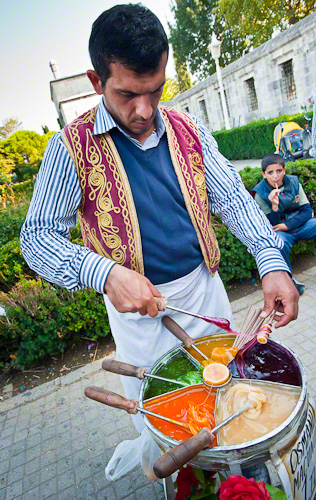 A vendor makes me a candy on a stick 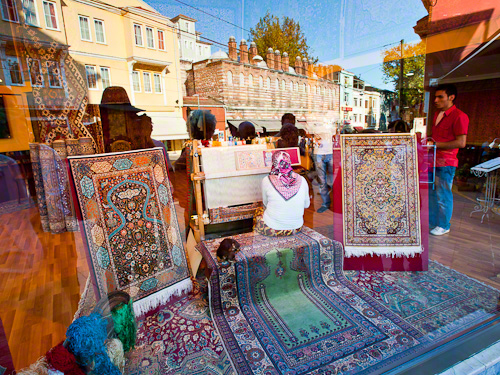 Weaving a rug in a Sultanahmet store window 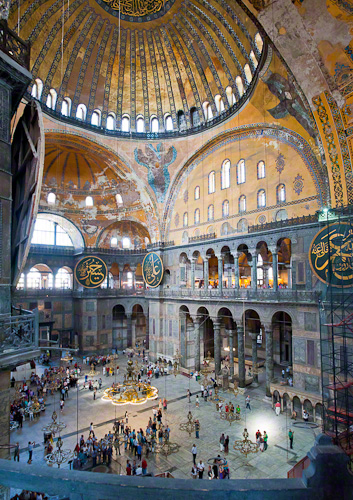 The immense interior of the 1,700 year-old Aya Sophia 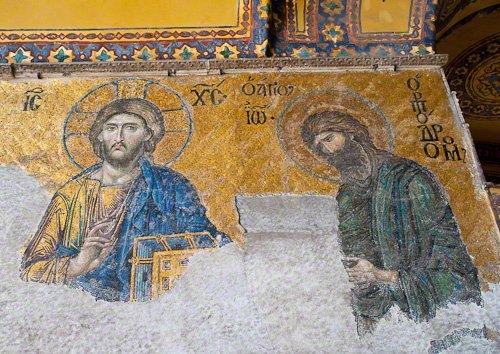 For over 1,000 years, the Aya Sophia was a church. Converted into a mosque after conquest by the Ottomans in 1453, the beautiful mosaics were covered over. Islam does not permit humans or animals to be depicted in a mosque. These have recently been uncovered.

The afternoon and evening become a blur of too much good food, impressive ancient sights like the Sultan Ahmet (Blue) Mosque,  the 1,500 year-0ld Aya Sophia, and exhaustion. Getting to bed too late again, I don’t fancy the 4:30 wake up call. Ephesus though, south of Izmir, where St. Paul preached, beckons.