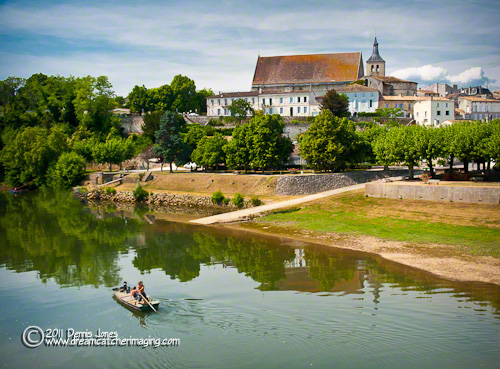 Straight out of the past, a couple and their dog paddle past the ancient town of Guitres.

Ancient and pastoral, two words that provide context for this idyllic, gently rolling, forested, countryside of old vineyards, older farms and even older, tiny villages. This is the south of France. Ornate steeples of 11th and 12th century churches tower over the cramped, cobblestone streets and stone houses as they have, seemingly unchanged for a millennium.

A stone bridge spans a river, dense forest lining its banks, as young boys fish for the big ones we see swimming below. A couple in a small, wooden bateau passes under the bridge. The longhaired man stands at the stern, propelling the boat with its single oar. But for the tee shirts and shorts, it could be a scene from any time in the past 500 years. 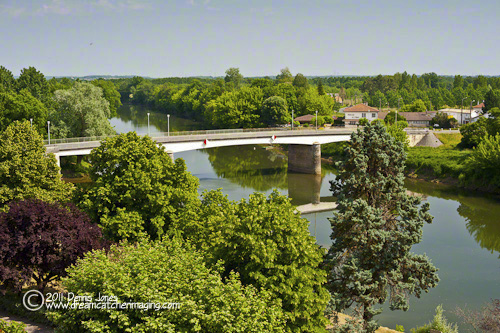 L’Isle and the countryside around Guitres’.

Entering the town on foot, it appears dormant, the houses shuttered, the streets empty but for three, old men at an outdoor table down the block. Fortunately, the small, modern patisserie on the tiny square is open, allowing us to appease our appetites with fabulous French pastries and chocolates. 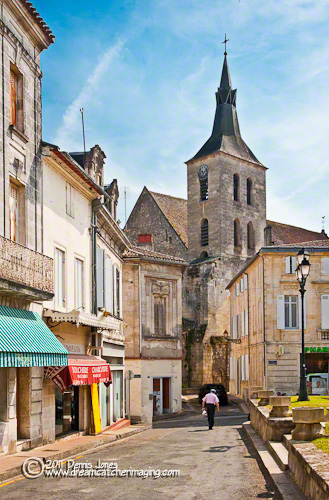 This is Guitres, an ancient town on the Isle River. The 11th century abbey, Notre Dame de Guitres, is world famous for its acoustics. Unfortunately, the concert season, with an a capella vocal ensemble, doesn’t begin for another two weeks. To hear unaccompanied voices singing Gregorian chant and Renaissance vocal music in the sparse darkness and vaulted setting of Guitres’ church would be close to heaven. 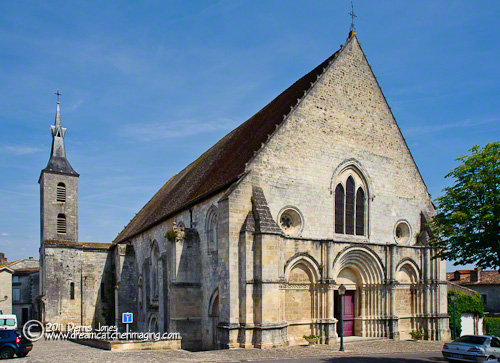 The Abbey of Notre Dame in Guitres 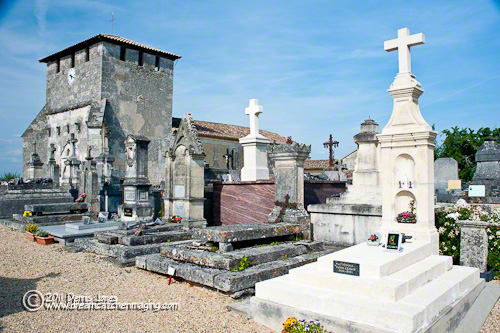 A typical village cemetary with its ancient church in a tiny village near Guitres’.

Our rented car gives us flexibility to explore. With a sudden change to blustery weather, a day in the city of Bordeaux seems appropriate. The old city center is another UNESCO World Heritage Site. Our hosts at the farm/b&b recommend a park and ride north of the city that, for three Euros, provides parking and tram tickets. Such a deal!

The wide, muddy Garonne River splits the city and provides easy access to the sea. Bordeaux has been an important port for centuries-France’s primary debarkation point for early trade with the America’s. Vast quantities of wine were shipped from here. Enormous fortunes were made, not just from wine, but sadly slaves as well. 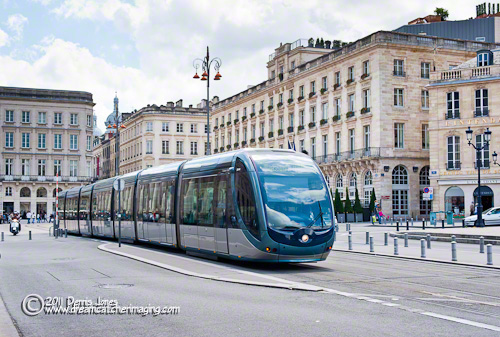 One of Bordeaux’s stylish and efficient trams. 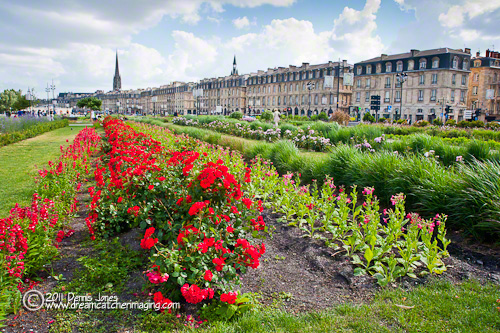 Along the Quai de la Douane and the Garonne River.

Departing the tram at the Stalingrad stop allows us to walk across the Pont de Pierre, the bridge spanning the river, for the full impact of Bordeaux’s elegant, centuries-old riverfront. Grand, 18th century, four-story buildings line the river for miles. Only the steeples of churches and cathedrals punctuate this magnificent façade as they rise above the warren of streets and alleys behind the riverfront. 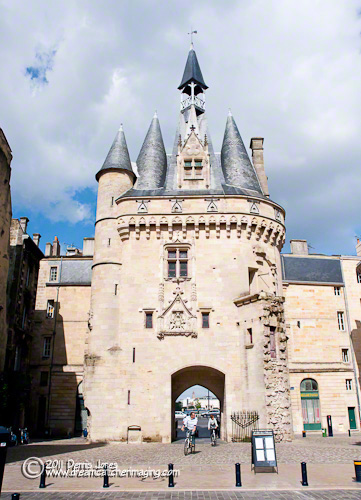 One of the gates into the old city in Bordeaux. 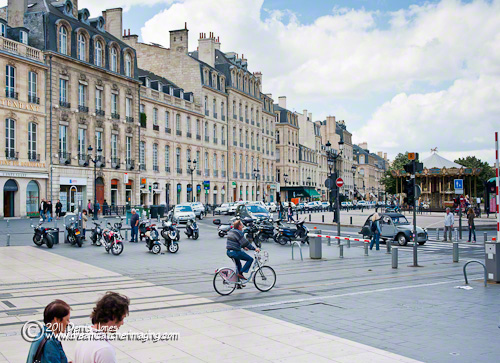 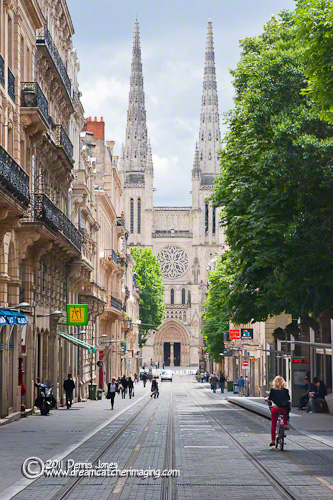 The Cathédrale St André at the end of the Rue Vital-Carles in Bordeaux old city. 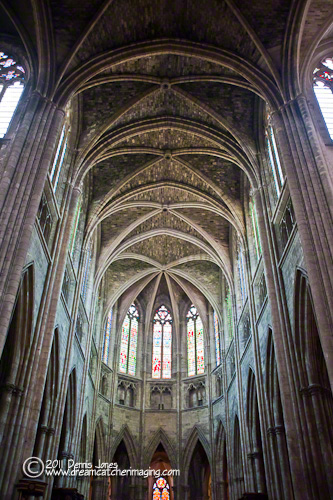 Wandering the busy, stately streets, we find the elegant flying buttresses of the Cathédrale Saint-André de Bordeaux and turn left to visit the Musée d’Aquitaine to learn something of the history of the region. The museum is a wealth of historical information. With evidence of ancestral human occupation reaching back as far as a staggering 700,000 years, the archeological record is rich. Several caves in the region yielded Neanderthal artifacts dating back 30,000 years while other caves, including the famous one at Lascaux, contain Paleolithic paintings estimated at over 17,000 years old. 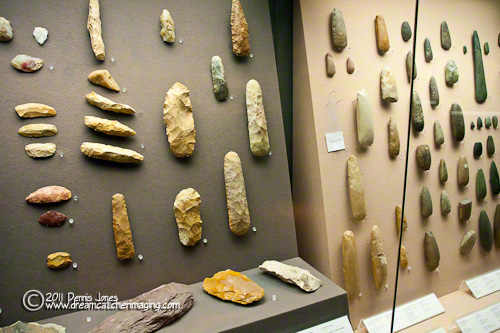 Here again, Rome left its impressive mark. The museum’s collection reflects this past with much Roman sculpture, glass and mosaics. Turbulent centuries followed the slow collapse of the empire. 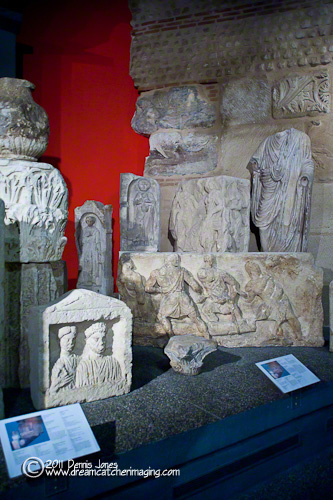 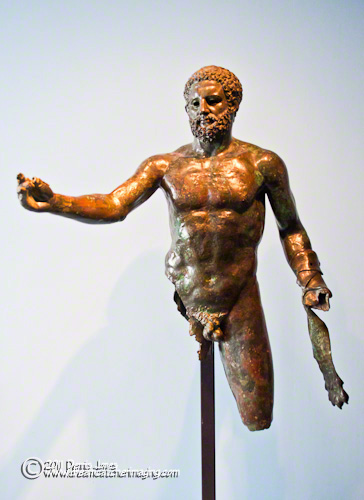 Bordeaux didn’t begin to come into its own until the middle ages when Eleanor of Aquitaine married Henri Plantagenet who shortly thereafter became King Henry II of England. The many Romanesque churches of the city are clear evidence of this growth. Bordeaux’s golden age though, came with the 18th century when it became the focus of commerce with the New World. 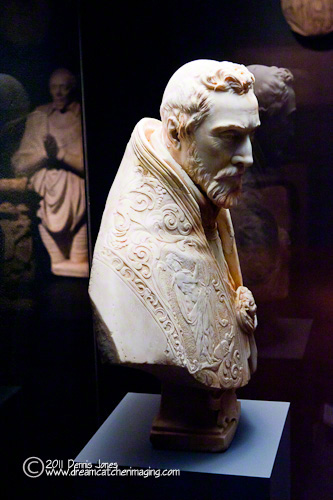 A beautiful, marble bust of some 18th century archbishop. Such elegant craftsmanship. 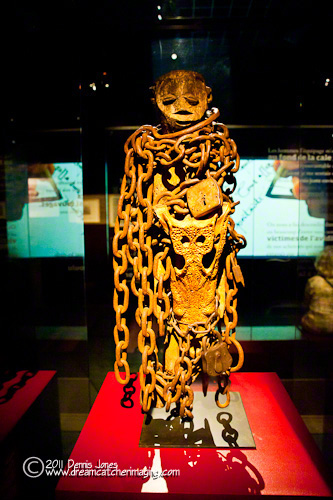 Sadly, Bordeaux profited greatly from the slave trade. It was a hub of the triangular trade with the new world. This African carving is festooned with actual chains used in the despicable trade.

Leaving the museum, we find the old city center and stroll through the alleys and pedestrian streets checking out the enticing patisseries and chocolateries. In one, you could get high just breathing the chocolate fumes! 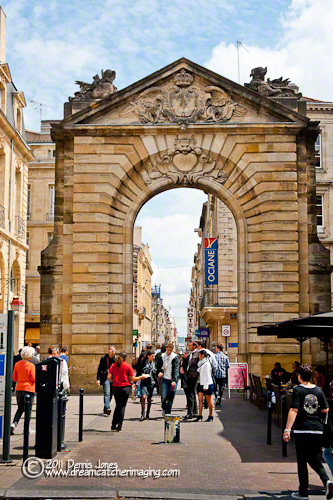 Another of the gates to the old city which is now entirely a pedestrian area.

I hear clapping and cheering coming from an extremely, crowded, corner store and go to investigate. It’s the opening day of Bordeaux’s first Apple Store! 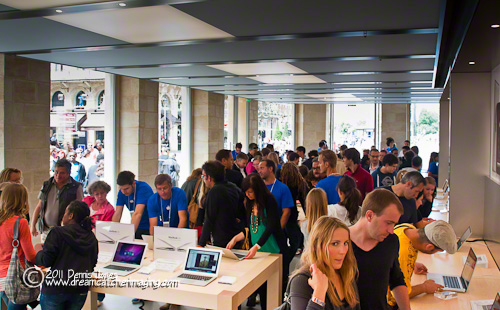 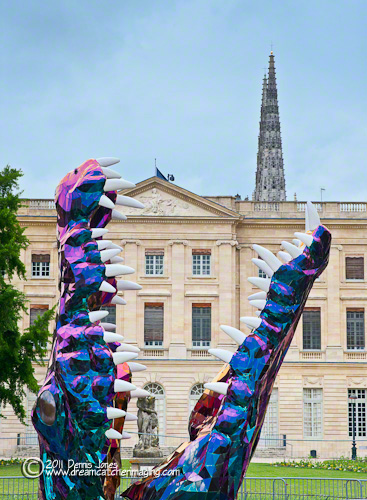 Outside the Musee’ de Beaux Arts. 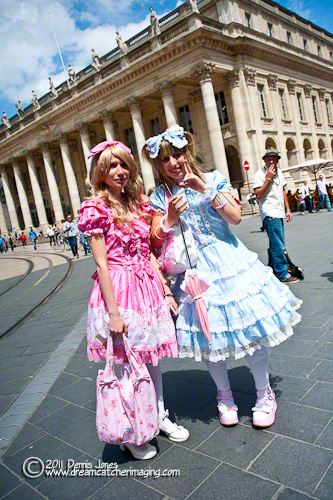 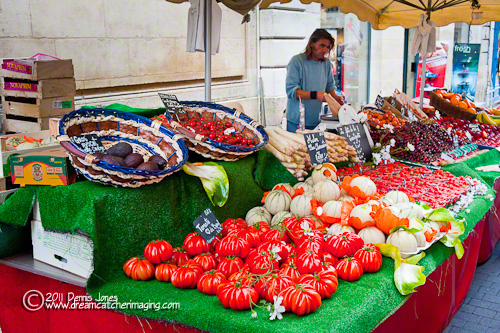 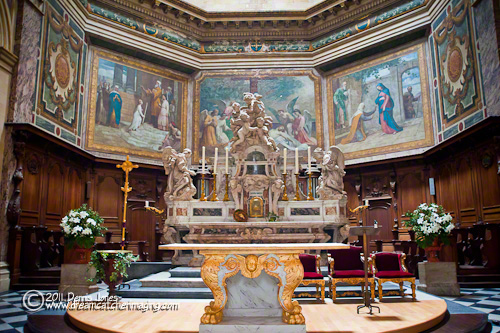 The altar area of the Notre Dame de Bordeaux. 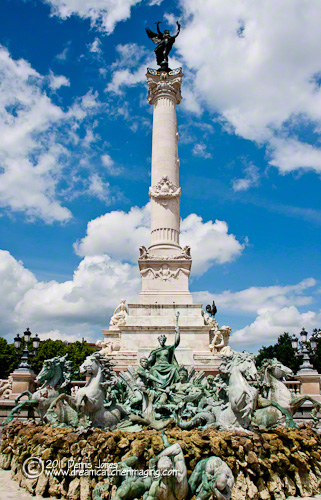 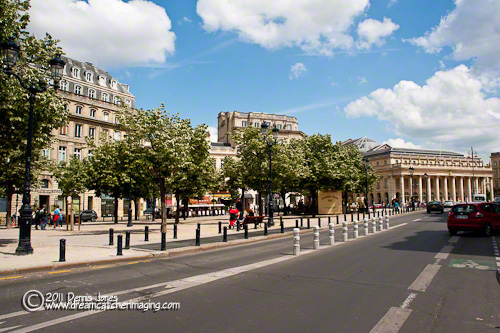 Homes of the wealthy leading to the Grand Theater of Bordeaux. 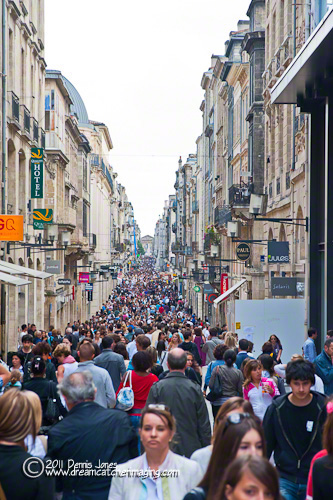 Toward late afternoon, the streets got really busy! 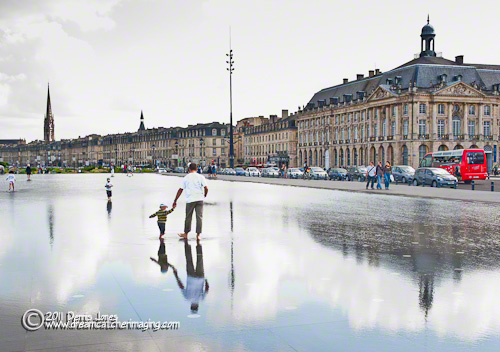 The wonderful reflection pool in front of the Place de la Bourse along the Garonne.

Ending our day, the quay leads us back to the tram and eventually our car for the forty-minute drive through the ancient villages, vineyards and quiet country roads to the farm/b&b where we are staying.