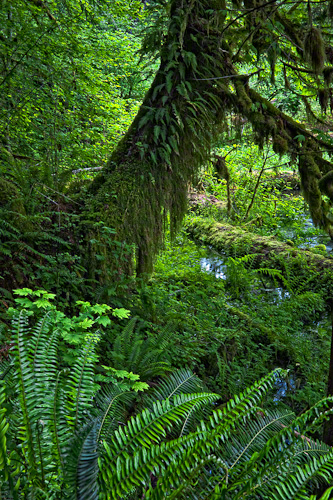 Entrance to the Hall of the Mosses

I know of no place like it on earth. Perhaps up some lonely Patagonian fjord or an isolated valley along Russia’s Kamchatka Peninsula, but the incredibly verdant, temperate rainforests of Washington’s Olympic National Park are unique in my experience.

The Hoh Valley provides the quintessential Olympic experience. Opening to the west not far from the ocean, the Hoh feels the brunt of the massive, wet, winter and spring storms constantly brewing in the Gulf of Alaska. Westerly winds pour moisture off the sea. The deep, mountainous valley funnels it eastward where it meets the steepening slopes of the Olympic range, squeezing up to fourteen feet of precipitation into the narrowing Hoh drainage. 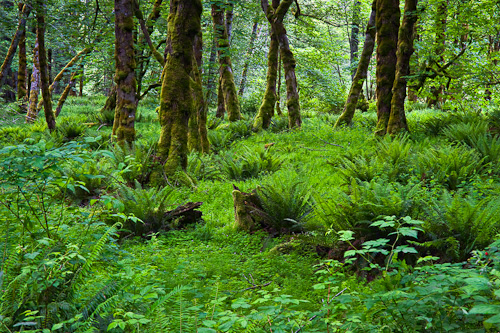 The effect produces a lush, amazingly green landscape. Every square inch of ground is blanketed with life. The massive trunks of the conifers and deciduous trees are thick with a spongy carpet of mosses and ferns. From the spreading limbs hang draperies of dense moss. These old growth, temperate forests contain three times the biomass of tropical rainforests. 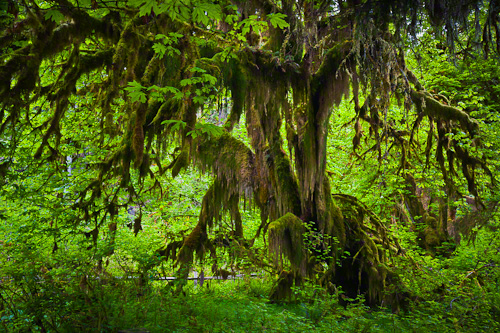 The Hall of the Mosses, a short, circular hike outside the ranger station yields the most impressive examples of this rainforest architecture. The campground is nearby as are the trailheads for the short Spruce Nature Trail and the Hoh River Trail leading 17.3 miles deeper into the valley and up the slopes of 7,980’ Mt. Olympus.Along the Spruce Nature Trail 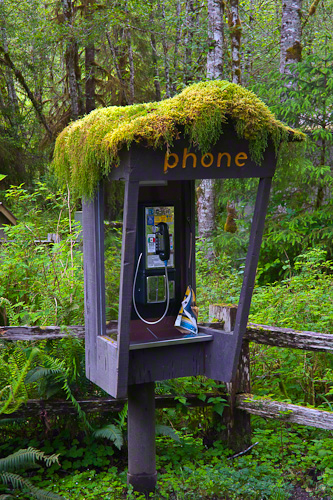 Outside the Hoh Ranger Station 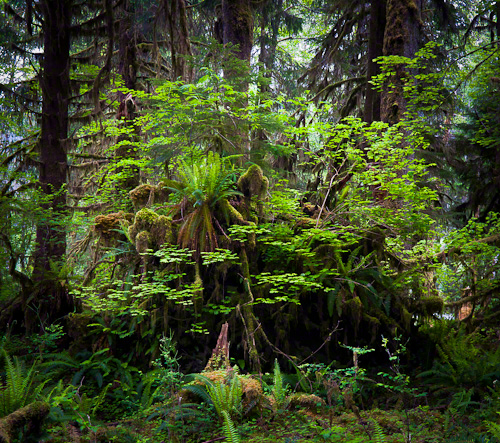 The densely foliaged roots and stump of a fallen giant

Though richly beautiful, the Hoh is only a small section of this huge national park. Two other valleys farther south, the Queets and Quinault, offer similar yet different experiences. High mountains dramatically surround Lake Quinault, just off Highway 101. Both north and south shore roads carry you along its shoreline and deep into the interior valley. Where the pavement ends, hiking trails lead you miles farther into the old growth forests.

Then there are the beaches. Miles and miles of deserted sand, cliff and rock stretch along the western edge of the Olympic Peninsula. Several campgrounds are placed strategically on the bluffs above the beaches. Some campsites open to the ocean. From ours at Kalaloch, (pronounced clay-lock), I watched a pod of Orca spout and play beneath a brilliant sunset. 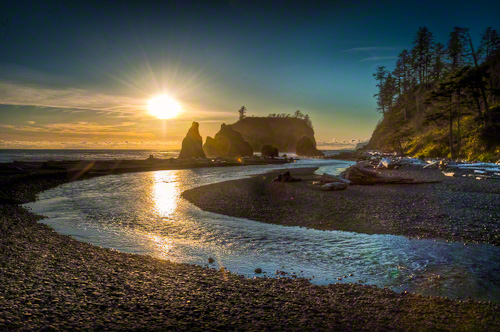 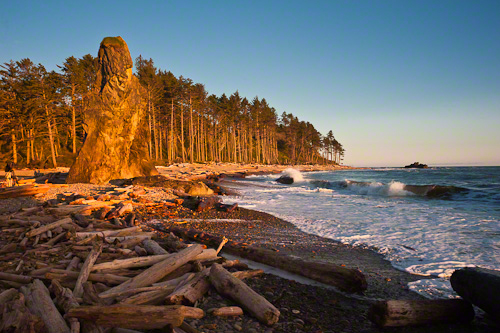 Five Native American tribes make their homes along the extensive coast as they have for hundreds if not thousands of years. Reservations, only a fraction of their earlier lands, stretch from the Quinault in the south, followed northward by the Hoh, then the Quileute, the Ozette and finally the Makah. The Makah Indian Reservation, at the mouth of Puget Sound, occupies the extreme most northwesterly point in the continental U.S..

Leaving the Hoh Valley and heading north, we drive through endless stands of Pines, Hemlocks and Douglas Fir, most being farmed, ready for harvest in twenty to forty years. Passing through Forks, of Twilight Saga fame, we made a turn to the east along the northern boundary of the park where we found a lovely campsite in a practically deserted campground along spectacular Lake Crescent. 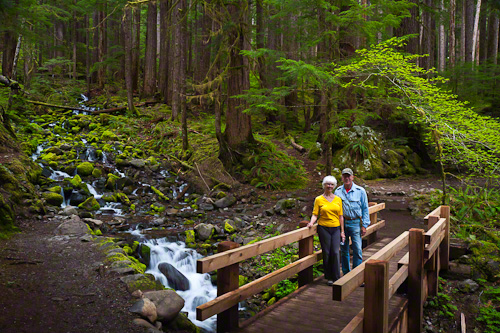 Yolanda and I along the trail to Sol Duc Falls 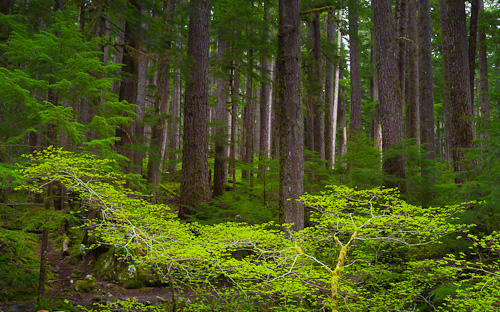 A gentle, abiding peace reigns throughout the old-growth forests of the Sol Duc Valley. 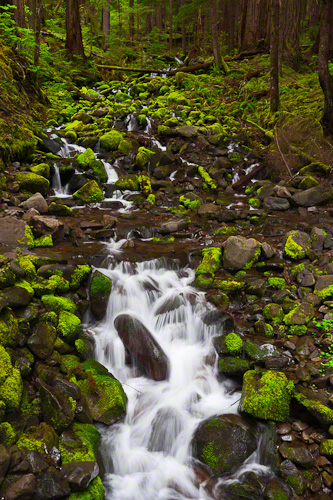 A small cascade descending toward the Sol Duc River

Driving south along the Sol Duc River took us to the Sol Duc Falls trailhead. The easy trail runs through a lovely, exceedingly tranquil forest of widely spaced, old growth Cedars and Firs separated by verdant undergrowth. The roar of the falls beckons. A turn in the trail reveals a wooden bridge spanning the chasm offering a front row seat as the river splits and drops in steps perhaps eighty feet. 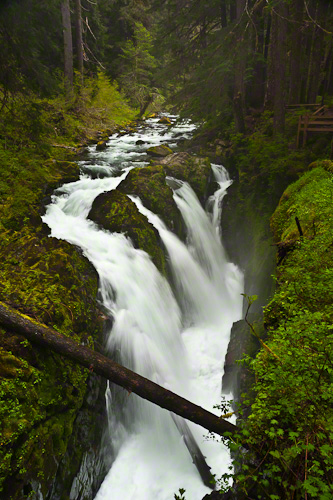 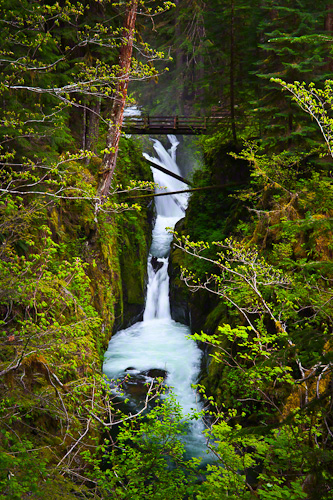 Our final stop in the park was a short drive up the Elwah River Valley to take a first and final look at the Glines Canyon Dam. This dam, along with the Elwha Dam, will be removed next summer, allowing the river to flow freely for the first time in almost one hundred years. This will allow salmon to return and spawn in over seventy miles of pristine river and stream. 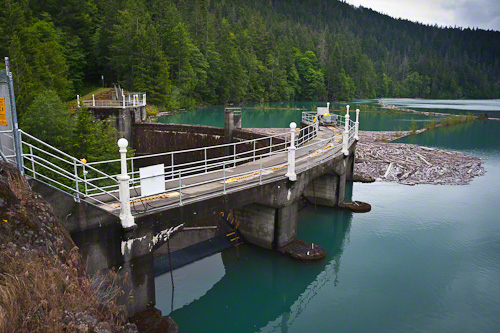 Soon to be removed Glines Canyon Dam. It’s difficult to imagine the task and how they’ll accomplish it.

A return trip is imperative. I have yet to explore the dramatic mountains of the park and Hurricane Ridge where alpine trails lead to many more wonders. The entire eastern side, in the rain shadow of the Olympics, promises additional picturesque hiking and camping at oddly named Dosewallips, Hamma Hamma and Staircase.

As with all our national parks, Olympic National Park is uniquely wondrous: an ecosystem worthy of preservation and veneration, a land of enormous variety and natural beauty, a national treasure well worth exploring.