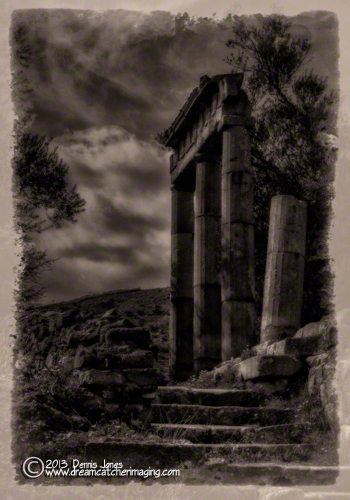 At the intersection of legend and history.

Few regions in the world have held such hold on the collective psyche as the northern stretch of Turkey’s Aegean coast. Think Homer’s Iliad and the Trojan wars, the Biblical city of Smyrna and more recently, Gallipoli a name held in reverence by both Turks Aussies and Kiwis. And how about the dwelling place of Satan?

Driving west along the Sea of Marmara from the megacity of Istanbul, the housing developments thin out and rich, rolling farmland dominates.

After two hours, low mountains appear with quiet, blue lakes nestled within their verdant valleys. Turning southwest toward Gallipoli, the long, narrow peninsula which protects the legendary Dardanelles Strait from the Aegean, rolling hills and small plains are filled with blossoming orchards surrounded by rice paddies and fields with emerging artichokes and strawberries. 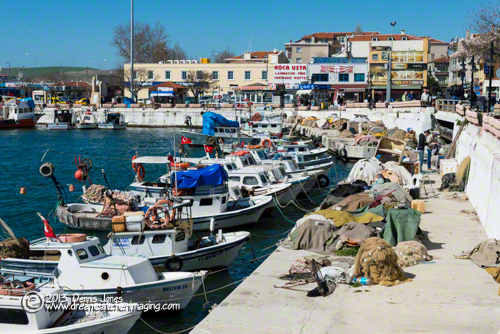 We arrive at the port of Gallipoli, Galibolu in Turkish, the major transit point south across the narrow and dangerous thirty-eight mile long Dardanelles. Known to history as the Hellespont, it allows passage between the Mediterranean and Black Sea. Here, as in Istanbul, a narrow strait separates Europe from Asia.

While awaiting the ferry, we wander the small, double harbor where the fishing fleet lies at anchor. Fisherman patch nets while others sit upon the many bags of nets strewn about the stone wharf talking and smoking. 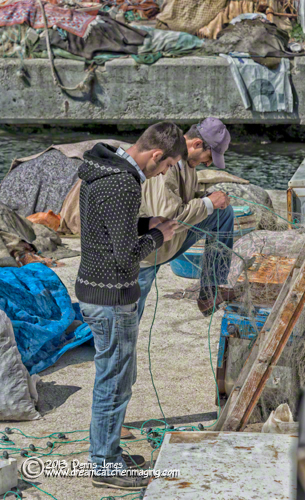 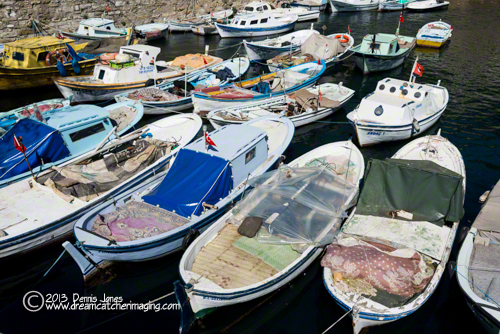 Loading the ferry, a blustery breeze stirs the choppy waters of the strait. The three mile crossing takes thirty minutes and, after disembarking, we head toward perhaps the most legendary city on the planet, Troy. Looking across the strait as we drive the forty-five minutes southwest, monuments to the WW I battles of Gallipoli appear on the opposite shore.

These battles between the Ottoman army and the ANZAC forces of Australia and New Zealand, have become legend. The Ottomans, allied with Germany and led by Colonel Mustafa Kemal, held back an intense assault over many months. Defeat would have given the allies access to the Black Sea and supply routes to Russia. Brutal fighting cost over four hundred thousand casualties.

Mustafa Kemal gained fame here and later passed into legend as Atatürk, the father of modern Turkey. Every April 25th, tens of thousand Aussies and Kiwis, descendants of the ANZAC troops, come from afar to honor their memory at a sunrise service.

Coming to the turnoff to Troy, a 5 km road leads west through fertile farmland to the archaeological site.

Ruins of legendary Troy hold their silent sentinel over the now silted bay that made the city wealthy.

Troy disappeared from history sometime after the 4th century CE. Historians were not certain whether it had existed or was simply a legend. Heinrich Schliemann, a German businessman who had made his money in the gold fields of California, became obsessed with discovering Troy. He read every account he could find and finally determined the location before digging a long, wide trench down to bedrock. His initial trench revealed at least nine levels of habitation, growth and destruction. 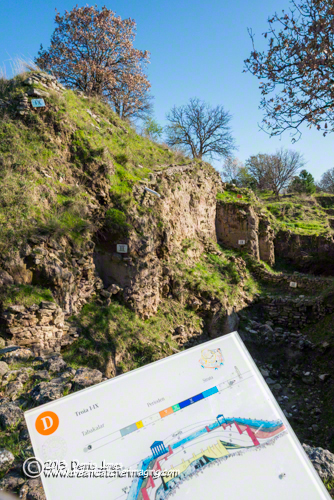 Showing the nine layers of habitation between 3000 BCE and 100 BCE found while excavating the city. 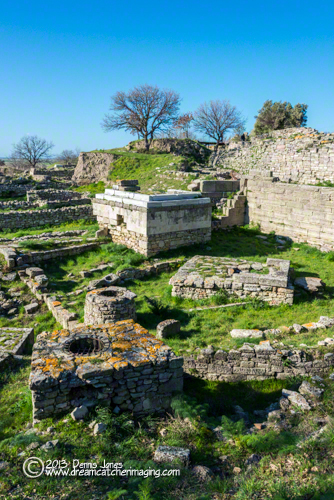 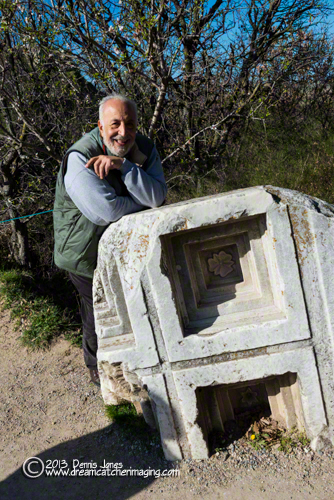 The city had been on a large bay at the mouth of the Hellespont. The bay has silted up over the centuries. Ships passing the strait can be seen from the ruins across several miles of lush, flat farmland. Troy became rich collecting anchorage fees from the ships waiting in their harbor for the infrequent favorable winds that would allow them to pass the strait. 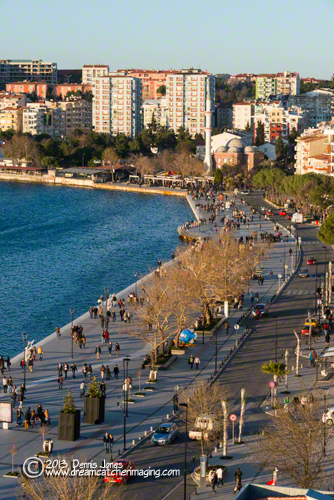 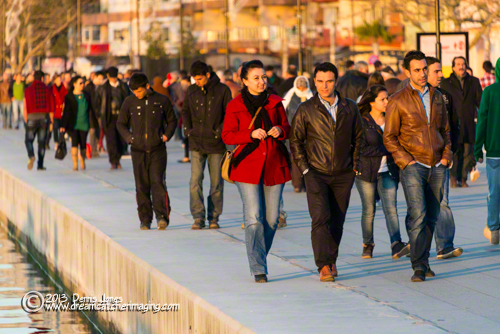 We spend the night in Çanakkale, a vibrant, modern city on the Dardanelles. It is Sunday evening, an hour before sunset. Strolling families and couples fill the wide pedestrian mall lining the waterfront. The huge Trojan horse from the 2004 movie stands proudly on the mall. 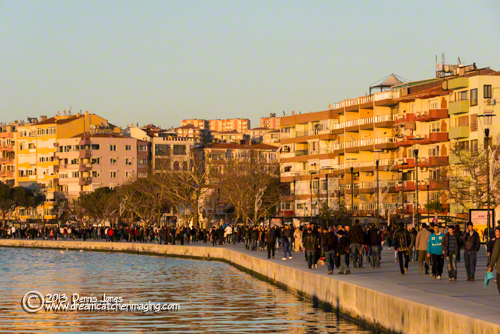 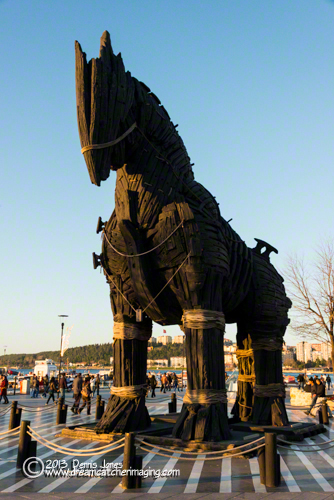 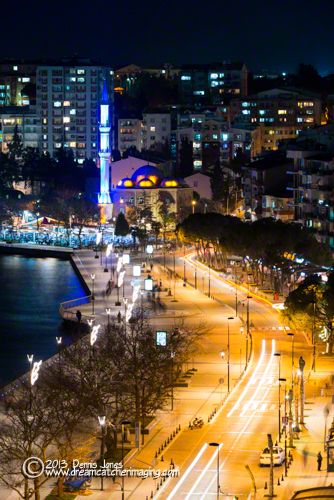 The brightly lit minaret of a waterfront mosque is a focus of the lively city of Çanakkale.

The following morning, we head south to the ruins of the ancient city of Pergamon and, according to the Book of Revelation, the dwelling place of Satan. The acropolis, with its theaters, temples and the second finest library in the ancient world, rises 1,000 feet above the river plain. The magnificent, reconstructed Altar of Zeus, likely thought of as the throne of Satan, has it’s own room in the Pergamon Museum in Berlin. 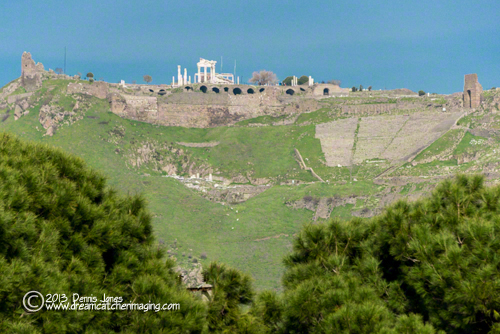 Unfortunately, the acropolis is closed for major reconstruction, but wandering the Aesklepion, one of the major Roman centers of healing, offers a taste of the architectural splendor of an ancient spa. Legends come to life and are made in this fertile coastal region of Turkey. And how could they not after 5,000 years of human habitation. 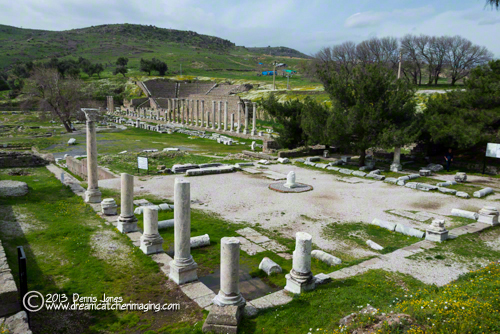 Ruins of the ancient Sanctuary of Asclepius, the god of healing, testify to the magnificence of an ancient Roman spa. 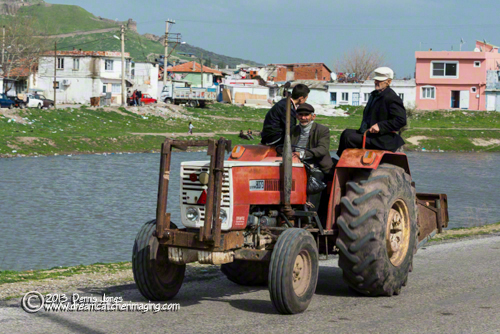 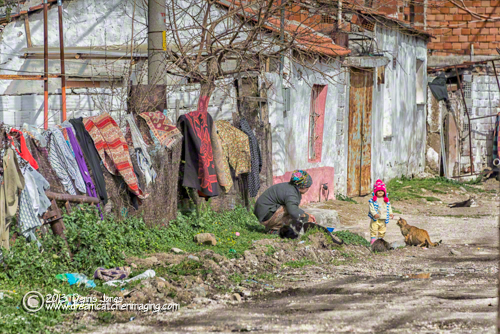 Country life in the shadow of the acropolis of Pergamon.