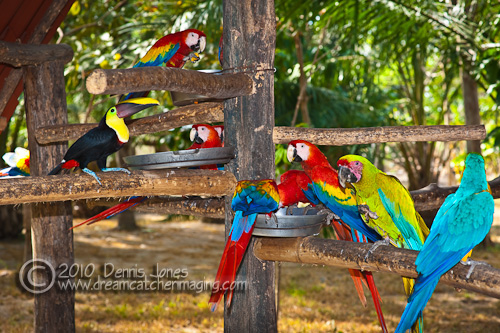 Feeding time at El Manantial with Scartlet,Green and Lapis Macaws.

Pity those who know nothing of Costa Rica but the beaches. These people fly into the Alahuela or Liberia airports, rent a car and immediately drive to the beach. After a week or two, they return to the airport, flying home with the vast diversity of Costa Rica lying undiscovered beneath them.

But…to not experience the lush beauty and diverse biology of the cloud forests; the cool, sweetness of the cedar forests at mid-elevation; or the “perfect” climate of the 2,000-3,000 foot zone, the best climate in the world according to National Geographic, is to deprive yourself of Costa Rica at its best. 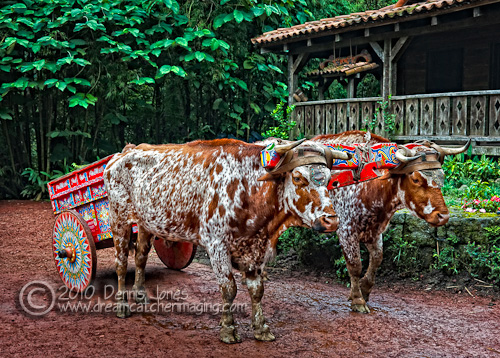 A traditional ox cart used by Cafeteros, coffee growers, to harvest beans on their Cafetals.

After leaving Hacienda Baru’, www.haciendabaru.com , Yolanda and I drove north along the Costanera to meet a friend of a friend, Des Curtis, living in Heredia. We made good time but had to make it to Heredia before evening when he teaches classes at one of the several universities. Once again, I drove the new highway to San Jose and, just before reaching the capitol, took the exit to Heredia. Yes, there is amazingly, a sign. I followed the road north a couple of klicks to where it dead-ended at a “T” with a main street.

Alas, once again, no sign indicated which way to turn! I knew the general direction I had to go so flying by the seat of my pants, I turned left, drove a kilometer or two to a main street and turned north. Winding around and dipping down into a small valley with a lot of traffic, rush hour was just beginning, I drove and drove, finally a big sign saying Heredia loomed. I amaze myself at times with my directional instincts.

And then there was a second identical sign, and then another, and then a slightly different one, and then another and another!!! Where there were no signs at all where I needed them, here were six large signs saying “HEREDIA” all within two kilometers at the most! Unbelievable. After arriving, I joked with Des, who had been a road engineer in Britain and Bermuda, that he should do a guerilla action and some dark night, steal one of the signs and post down at that “T”. He just shook his head.

Des lives in the mountains above Heredia northwest of the capital. His somewhat rural neighborhood provided a glimpse into a climate and economic zone most tourists never experience. Restaurants with incredible views of the central valley dot the cedar-lined roads. Small hotels offer Ticos a weekend respite from the congestion of San Jose.

Off the tourist circuit, these areas cover enormous swaths at 3,000-5,000 feet. They are the middle slopes of the many mountains and volcanos surrounding the central valley. Driving to the higher elevations takes you to world of pasture, pines, weekend cabins and sweeping panoramas.

Costa Rica comprises climate zones from sea level to over 10,000 feet. With the vast majority of the country being within the middle zones, you get an idea of what is missed by experiencing only the beach. It’s like coming to Colorado and knowing only Vail, beautiful as that is. 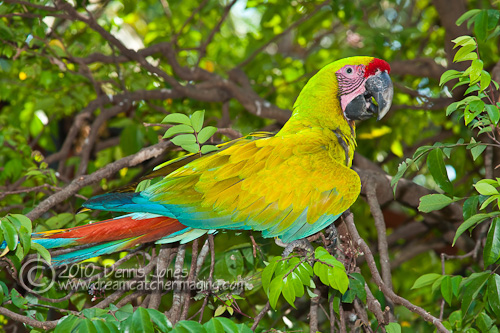 On our first day, Des, with his son, drives us back to the coast just north of Punta Arenas, to a private Scarlet and Green Macaw sancutary, El Manatial. What a treat! I have never been so close to so many macaws flying freely in my life. El Manatial takes in abandoned, injured and illegally captured birds, rehabilitates and breeds them for release into the wild.

Dozens of gorgeous young macaws perch in the trees around the feeding stations. They constantly fly about, brilliant colors flashing in every direction. We have to occasionally duck as they fly toward the feeding stations. Waddling on the ground, some attempt to open a spigot to get water. Toucans join them for the fruit. The rambunctious teenagers continually squawk and screech. The cacophony occasionally hurts my ears, but what a thrill. 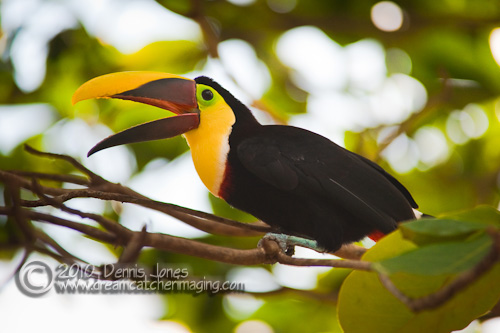 Large cages containing 20-30 birds sit apart from the feeding area. Here, the birds learn socialization skills and eventually find a mate, pairing for life. Once they pair up, they are moved to more distant breeding cages where they are left undisturbed. The grounds of the sanctuary, set within a region of farms, have been rehabilitated with large trees now shading what used to be fields. Several large cages hold species of beautiful, tiny monkeys while an extensive fenced area provides habitat for a troop of spider monkeys.

El Manatial is an amazing sanctuary. I doubt I will ever be so close to so many of these amazing birds again. Yes, I’ve seen quite a few Scarlet Macaws squawking and squabbling in the forests of Costa Rica, but with El Manatial’s efforts, Central America will see even more of these magnificent creatures flying freely through the trees. Perhaps even the rare and endangered Green Macaw will again populate the jungles of Costa Rica. 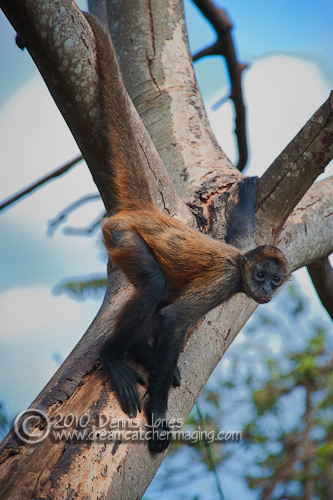 The next day, Des takes us to an area around 4,500 feet that suffered a devastating earthquake a year ago. It lies on the Caribbean side of the ridge between two 8,000 foot volcanoes; Poas and Barva. Weather from the Caribbean rises gradually over a broad area and is then funneled between the two volcanoes. Lots of moisture is wring from the clouds.

On January 8, 2009, the largest earthquake in 150 years struck. Hillsides collapsed, taking roads, trees and houses with them. Steep, densely forested mountain-sides filled the valleys with earth and debris. The earthquake and landslides heavily damaged roads and destroyed villages killing dozens of people. 2,000, almost constant aftershocks occurred over the following days. 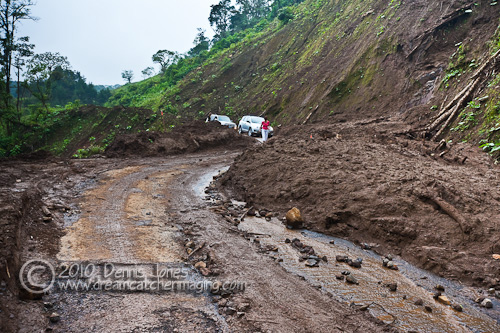 Dirt from the landslides still covers the road in places a year later. 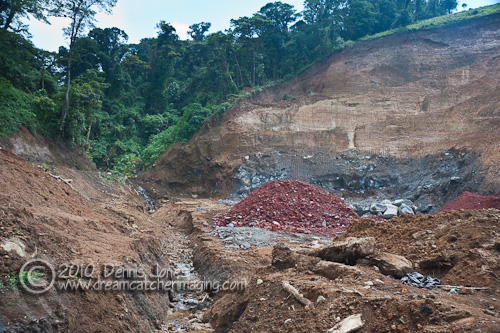 The collapse of huge amounts of earth caused massive destruction.

As we drive, the road, though passable, gets worse. Devastation extends over an enormous area. Landslides are everywhere. La Paz Waterfall Gardens was essentially the epicenter. 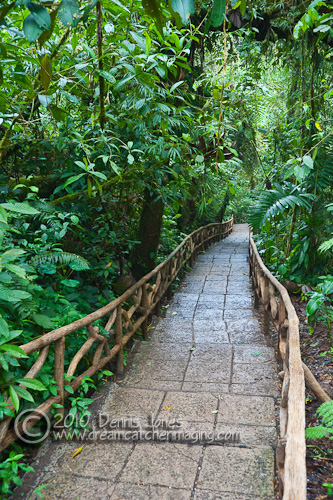 One of the walkways leading to the many waterfalls. 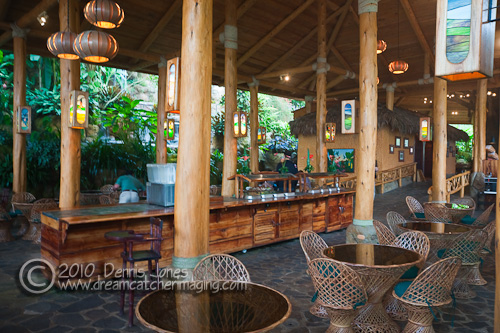 Part of the restaurant at La Paz Waterfall Gardens. 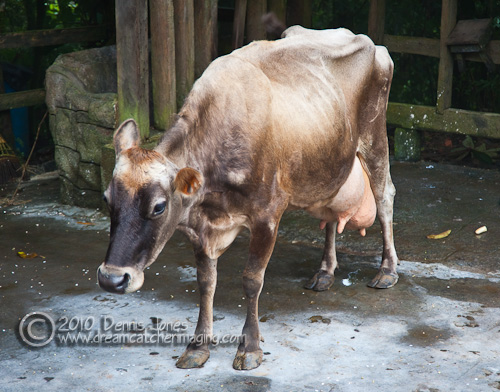 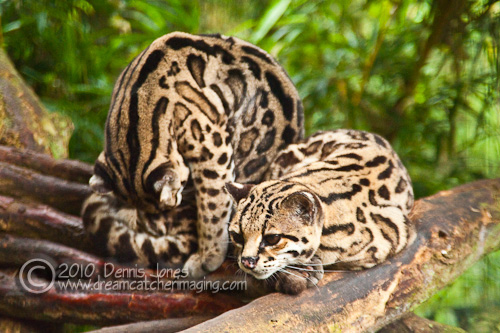 A Pair of Ocelots at La Paz Waterfall Gardens.

The rooms in the lodge are uniquely interesting; architectural gems. La Paz Waterfall Gardens transforms a piece of gorgeously, lush river and cloud forest into a work of art. Miraculously, damage to the park was limited mostly to some trails and viewing platforms. 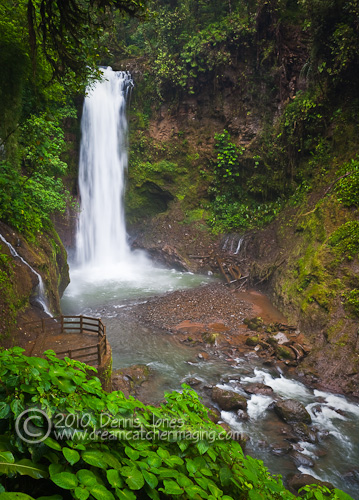 One of the many waterfalls at La Paz Waterfall Gardens. 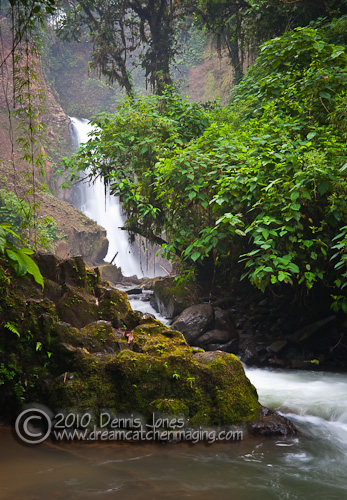 Another waterfall along the paths at the Waterfall Gardens.

Driving home that night in the fog was a bit challenging. Between Des, thankfully doing the driving, and myself, we could creep along. Yolanda sat in the back, eyes closed, not making a sound, just praying we make it down the winding road.

Our last night in Costa Rica was spent in Atenas which, according to National Geographic,  has the planet’s most perfect climate. Only twenty minutes from the airport, an hour from the coast, it is a world away from the city and the heat and humidity of the beaches. A small ex-pat community has settled there. 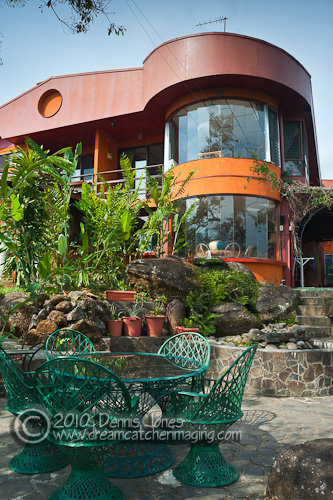 El Cafetal Inn-A lovely place only 20 minutes from the airport. A great place for your first or last few night in Costa Rica.

We spent the night at El Cafetal Inn, http://www.cafetal.com/ , actually in a neighboring town, Santa Eulalia. Being a cafetal, it grows it’s own coffee, served every morning with breakfast on the veranda. It’s sister restaurant, El Mirador del Cafetal, 15 minutes away, offers incredible views to the coast. A great place for a sunset cocktail or dinner!

Atenas still retains it’s small town, Tico feel. Small farms and cafetals, (coffee farms), abound. Ask a resident what temperatures they have and you’ll hear, “65 at night, 75 in the morning and 85 at mid-day. Year-round!”

So, Costa Rica is much more than just their beautiful beaches. In this article and the previous ones, I’ve only touched on a bit of Costa Rica’s diversity. When you go, get off the tourist path. Explore the back roads and discover the hidden gems that lie in wait.