“So, are you going to get screeched?” asks the stunningly beautiful, green eyed, blonde counter agent as she hands me my boarding pass. Both of us give blank looks. “Yes”, she says laughingly, “you get screeched and then you have to kiss a cod!”

So begins our introduction to the very unique province of Newfoundland. We are at the airport in Halifax, Nova Scotia, awaiting our flight to North America’s eastern-most city.

Yolanda and I left the promise of a beautiful, land-locked, Colorado fall for a month experiencing autumn along the rugged, North Atlantic cliffs of Newfoundland and the tiny fishing villages of Nova Scotia.

We arrive in St. John’s, the capitol and the oldest city in Canada, on an overcast, blustery mid-September afternoon. Surprisingly, we find a city that is a riot of color instead of the staid conservatism we expected from the “windiest, cloudiest, stormiest, foggiest, wettest, snowiest” city in Canada. Each of the neat, two story,19th century houses lining St. John’s hilly streets is painted a different color of the rainbow. 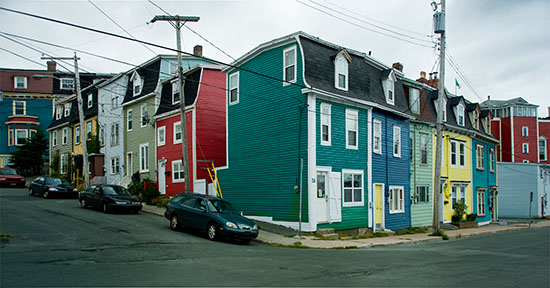 We reserved a B&B in Pouch Cove, a small village tucked into the base of a large, rocky cove opening east onto the North Atlantic. “First to see the sun”, is it’s motto. Earlier in the summer, whales and icebergs would have been a common sight. 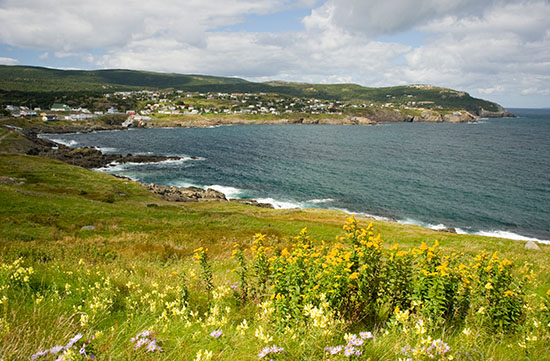 Pouch Cove with loads of wildlflowers even though it’s mid-september. 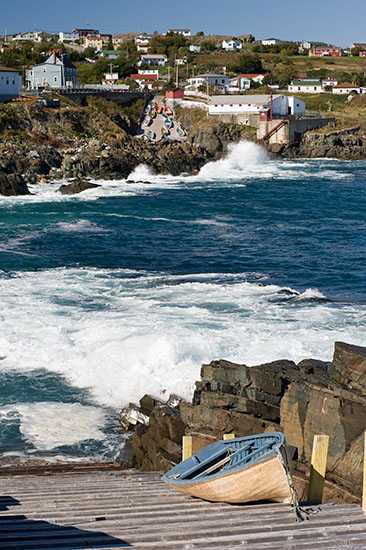 Protecting the boats from the wild North Atlantic.

Points East Guesthouse is a hundred-year old fisherman’s house. It is perched a hundred feet above the crashing surf. Like it’s owner, it has it’s eccentricities. The stairs are narrow and list to leeward. Our upstairs bedroom looks to the sea, a spectacular view. It’s door though, is very odd; four inches shorter than my six feet and with a door handle eight inches to low. Very likely it was a bedroom for seven or eight of the dozen children that originally lived here along with granny and the parents. 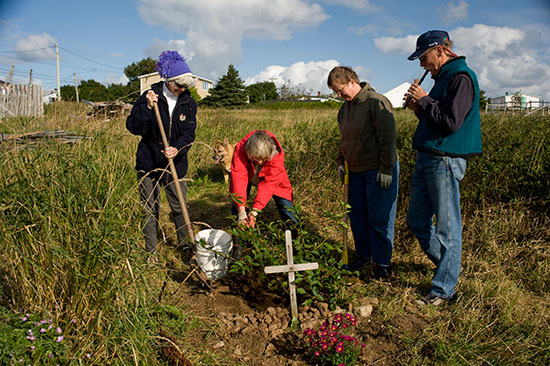 Elke, our host, hails from Germany via UC Berkeley. She stayed on after finishing her Ph.D. in Folklore in St. John’s to raise a thriving family of goats, chickens, dogs and cats. The gentle crashing of the surf wakes us on our first morning. The promise of hiking the extreme northern portion of Newfoundland’s East Coast Trail beckons us. 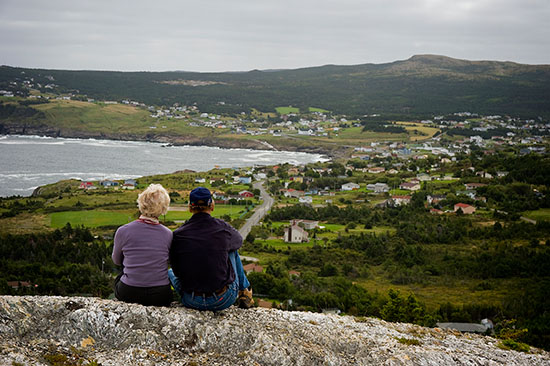 At a high point along the trail overlooking Pouch Cove.

The East Coast Trail is a 240 mile long world class system running the length of the eastern Avalon Peninsula. It winds along spectacular rocky headlands, through parks and preserves, passes historic lighthouses, the graves of numerous ships and charts the five hundred year history of this unforgiving coast.
The small section we do today offers only a tantalizing morsel of what exists further south. The trail is very well marked and maintained. It runs along extremely rugged cliffs, the grave of the Waterwitch, an 1875 schooner that ran aground with all hands lost, and climbs to rocky outcrops with panoramic views of the coast and cove. 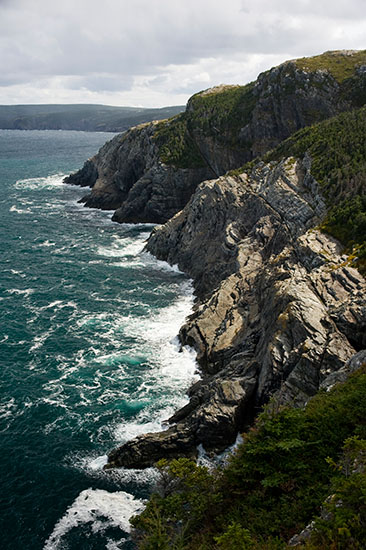 The wild and rugged coast typical of Newfoundland.

Further on lies the site of a W.W.II American observation post. German U-boats plied these waters, sinking many a merchant vessel. We Americans played an important role protecting the shipping in these waters.
We climb through miniature boreal forests of spruce and fir growing amidst a carpet of blueberries, bunch berries and partridge berries, a type of mountain cranberry. We pick the berries as we hike and meet not a soul. 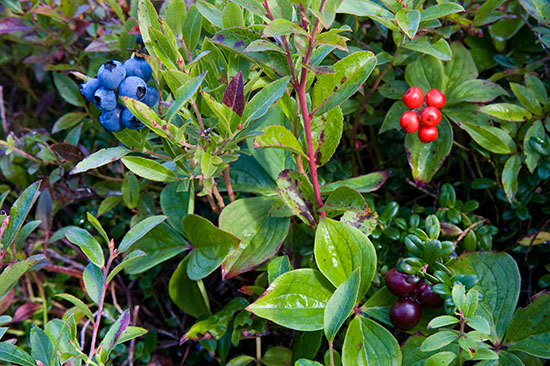 The trail reaches Cape St. Francis and turns south along the west coast and into Conception Bay. We don’t make it that far today but the section we do hike offers a glimpse of what lies further on.

The locals created a confederation of B&B’s to help hikers explore the trail. They will pick you up at the airport, drop you at points along the trail which allow you to hike a stretch and end up with a hot meal and warm bed in a different B&B each night. Information can be found about this service at www.trailconnections.ca.

Oh yes, about getting screeched. Screech is a vile concoction of high octane rums. There is actually a ceremony performed through which you become a true Newfoundlander. And yes, you do have to kiss a cod. After a session of getting screeched, I doubt you would even know whether it was a cod or your wife you were kissing.