The Legendary Warmth and Hospitality of Newfoundlanders

Synchronicity strikes again! On our last night in Pouch Cove I went outside the B&B to practice my tin whistle by the ocean. As I played, I sensed someone approach in the dark. The next door neighbor, Dan Rubin, an accomplished and respected Newfoundland musician, had heard me. We chat, and come to find out, he is leaving in a few days for Tuscany and has been unable to find a housesitter. So…change of plans! For the next month, Yolanda and I are in possession of a lovely, ocean front home with breathtaking views, whales spouting outside the cove, and an organic garden. 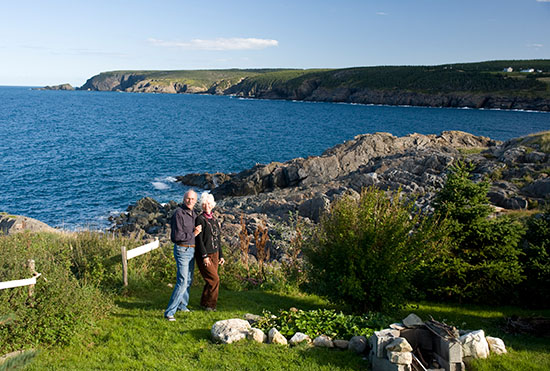 Here we are in our new backyard on Pouch Cove.

Earlier that day, while watching the ferry in Portugal Cove, up the hill walks a woman. We exchange hellos, start talking, and are quickly treated to a dramatic performance of her wonderful poetry. Betty Jarvis Vaters turns out to be a Newfie writer and poet. Like so many people we meet, she is friendly and irrepressibly exuberant. Nobody seems to have told Newfoundlanders they should beware of strangers. 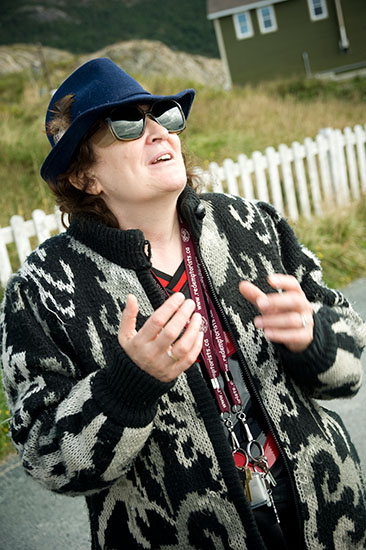 Betty Jarvis Vaters getting into it.

The next day, while walking along a road in Cape Broyle, a small village on a lovely cove down the lush Irish Coast south of St. John’s, up rides a father and two young children on bikes. They immediately engage us in conversation.

In his wonderful, thick, Newfoundland brogue, the father tells of how he just came back that morning from five days of fishing, saw three moose crossing the road and is now taking his kids out plummin’, hunting for native plums. He further regales us with stories about his family and his father’s glass eye which he would pop out and set down telling the grandchildren as he walks away, “Okay, you keeps an eye on dat dere eye for me now, aye.” 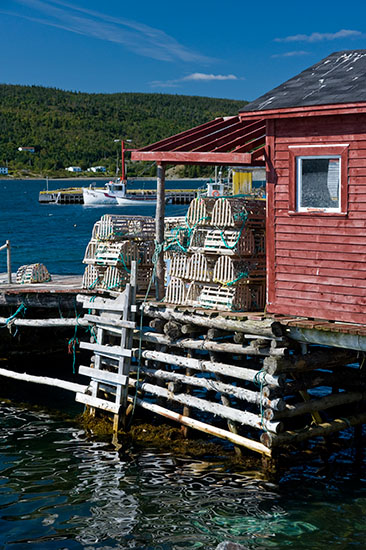 Not five minutes later I’m photographing a picturesque, well used fish shed perched precariously over the water. I am met with three hearty hellos from John and Neil O’Brien and John Walsh, fisherman with their morning’s catch. We chat as they make quick work gutting and filleting their freshly caught cod, tossing the carcasses into the water through a hole in the floor. 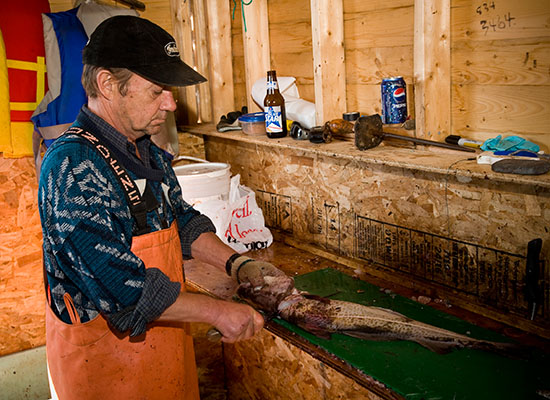 They grew up here and are sons and great grandsons, on back through many generations, of local fisherman. As we say our good-byes they offer us some fresher than fresh cod fillets to take back for dinner.
The next day, prior to taking possession of our new “home”, we are searching for a B&B in Torbay, another spectacular cove close to Pouch Cove. To our surprise, the woman greeting us at the door is someone we briefly met our second night at the Points East Guesthouse. Annette invites us to stay, doesn’t even charge us and asks if we would like to join her for a play that evening in St. John’s. It is the 30th anniversary gala of the Living Tide Theater, a Newfie institution. Wonderful, hilarious theater! 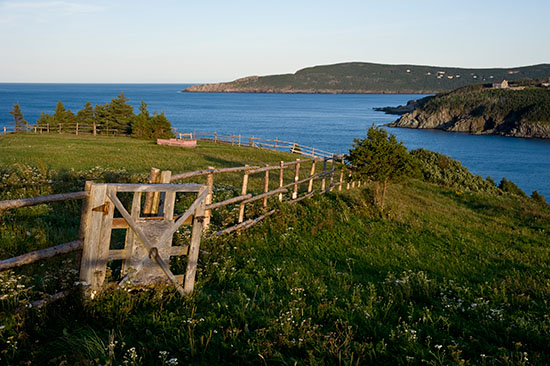 The paddocks and cove at Torbay. 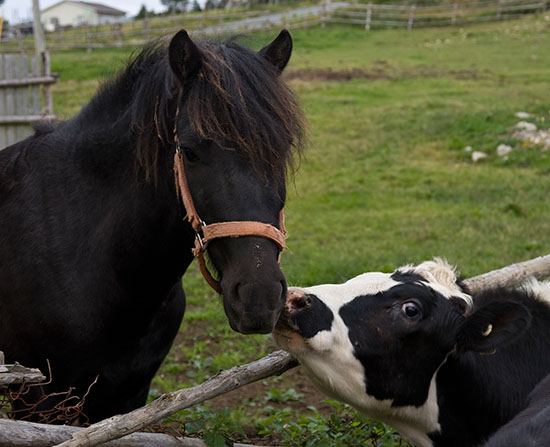 Newfoundland ponies, a special local breed, getting fresh with the neighbors at Torbay.

Another gloriously sunny September day later, we are hiking the northern end of the East Coast Trail to Cape St. Francis. A few scattered cottages dot the windswept, rocky shore. While watching a bald eagle soar above the cliffs, a woman pops her head out the back door of a cute, little, red caboose and yells, “Would you like to join me for tea?” 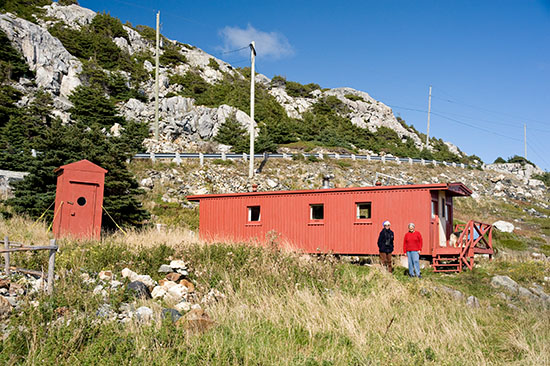 Helen Forsey quickly makes room for us at her table while preparing tea, cheese, crackers and homemade partridgeberry preserves. She is writing a book and seeing us has given her an excuse to procrastinate.
We have a wonderful conversation, finding out that her family in Newfoundland goes way back, that her father was probably the most respected constitutional scholar in Canada and that her very pregnant grandmother had been sent by her grandfather from Mexico, where they were living, by ship to Havana, by ship to Boston, by ship to St. John’s and by small coastal boat to northern NF and by train and then cart to some small town, just so the baby would be born in Newfoundland. 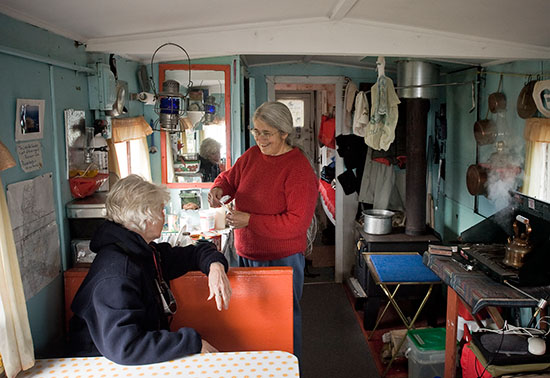 After saying our good-byes, we wander along the gravel road back to our car is parked at the trail head. Up drives an old, beat up pickup. It stops in the middle of the road and we are once again involved in conversation. Bob and Sally Noseworthy, (now there’s a name), have lived their entire lives in Pouch Cove. They’ve had a cabin near the cape for decades. 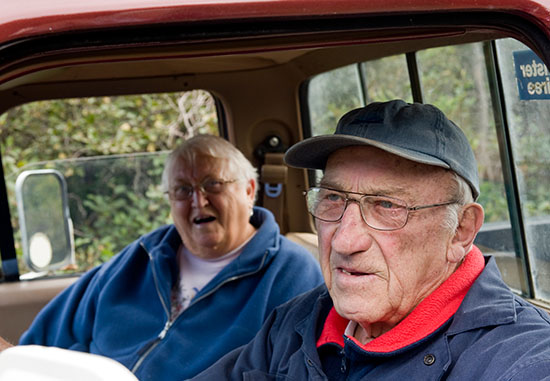 Yolanda mentions that we would love to see a moose. “Oh I donn wanna see no moose.” exclaims Regina, telling us of the time the family were all at the cabin. She was driving down to meet them with their prepared supper in pots and dishes on the front seat. A moose walks out in the road and just stands there, making Regina slam on the brake. It took two days to clean up the gravy, potatoes and chowder. 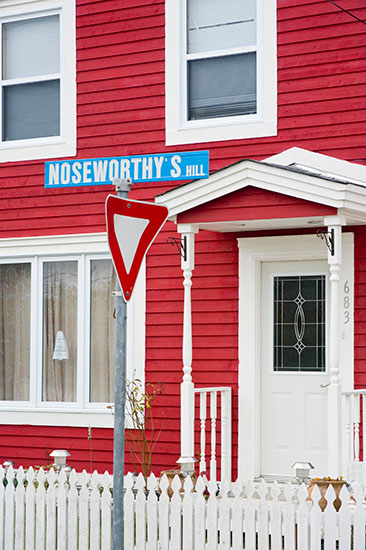 Noseworthy is almost as common a name  as Jones is in the US. 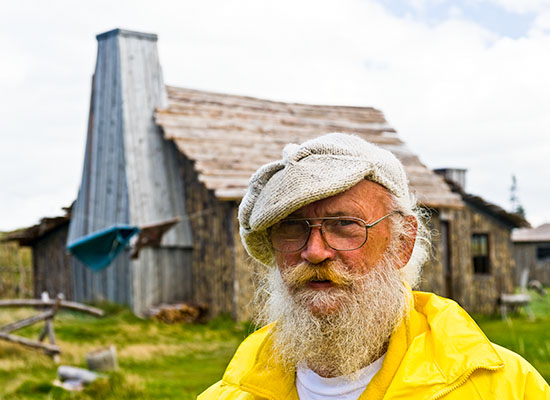 Fred Rex, an interpreter and fast friend at Random Passage.

We are smitten with Newfoundland. From our base by the sea in Pouch Cove, we are looking forward to exploring it’s warmth and hospitality, it’s dramatic beauty and picturesque fishing villages, it’s rich culture and Celtic music. And maybe, just maybe,  I might end up having to get screeched in and kiss that cod.