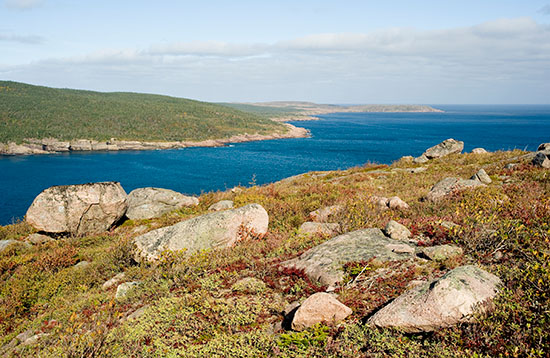 Imagine, sitting on a cliff two hundred feet above the broiling surf, watching a colony of 11,000 Northern Gannets crowded on a massive sea stack only fifty feet away? It is an assault on the senses; visual, auditory, and definitely olfactory. The birds swoop and glide, dive for food, feed their young, squabble and pair bond in unceasing chaos. 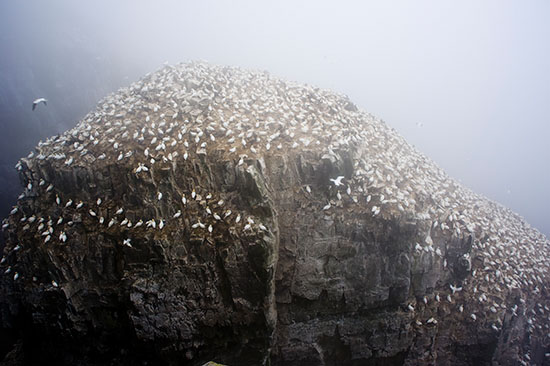 For untold centuries these majestic sea birds have nested on this massive rock and the inaccessible cliff face we are standing above, safe from terrestrial predators.
But it’s late in the season. We are getting only a taste of the tens of thousands of seabirds nesting annually along the rugged cliffs and rich waters of Cape St. Mary. This Ecological Preserve, on the southwest edge of the Avalon Peninsula, is the most accessible seabird colony in North America.
In summer, Murre’s, Kittiwakes, Razorbills and Guillemots inhabit the cliffs in vast flocks. Pods of whales also feed in these fertile waters. Humpback, Fin and Minke Whales leap and frolic just off the cliffs. 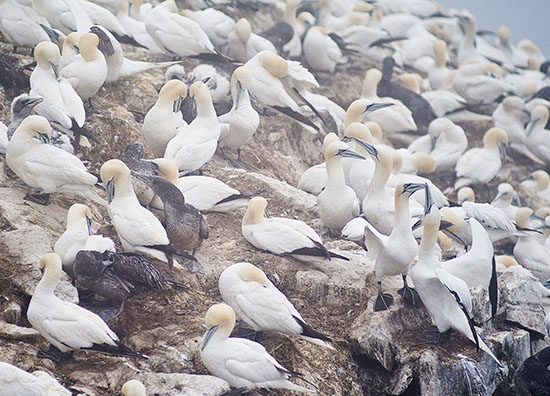 An hour’s drive east to Peter’s River is the world’s southern-most Caribou herd. At over 3,000 strong it must be an impressive sight in the bogs of the southern Avalon. 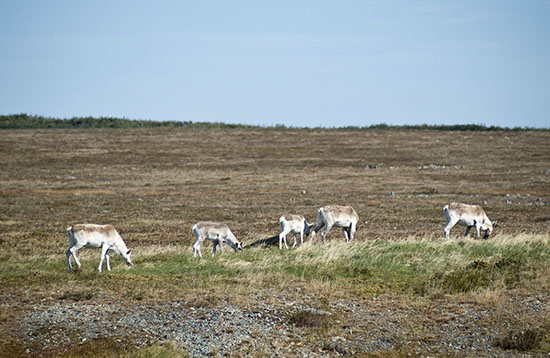 Southern stragglers, and all we saw. The other 2995 have moved inland for the winter.

Fifteen minutes farther in Trepassey I see my first moose. Newfoundland has far to many moose. Accidents are common. 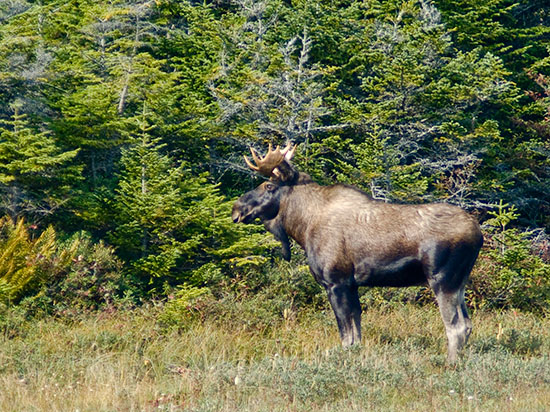 Check out the muscles on this guy. He’s probably nine feet tall!

I had been photographing the bogs at dusk. After dark, when I returned to our B&B, I parked fifteen feet from the front door, taking my equipment inside. I opened the front door to go back out and a large cow moose walked between me and the car. Exciting to say the least!
Naturally, I wanted to see more. When she was clear, I went out and was briefly chased back inside. She then stood under a street lamp thirty yards away. As I watched, the lights of a car came up the road. She took off. I heard a screech-bang and saw her run into the woods. Fortunately, Tom Corcoran, the driver, was shaken but okay. The moose, bruised no doubt, had run into the front corner of his car, doing little damage. 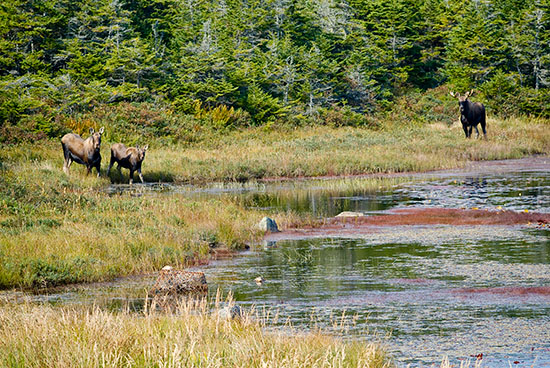 A cow, calf and bull become wary of my presence.

Another hour’s drive east plus a forty-five minute hike, takes you to Mistaken Point, the graveyard of numerous ships. More importantly, Mistaken Point is the burial ground of the 565 million year old Ediacara Biota, the earliest known, most complex, multi-celled creatures. 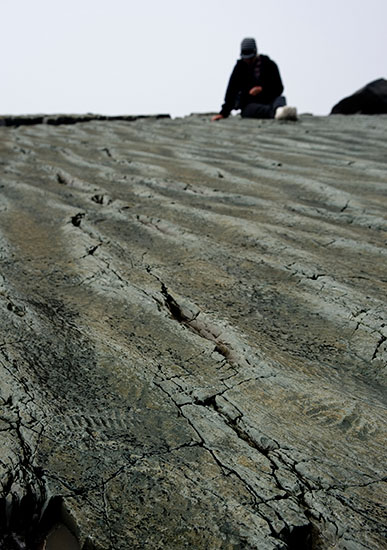 The fossil in the lower left was some type of leafy creature that rose off the sea floor on a stalk.

The tennis court-sized sloping rock face is littered with some 6,000 fossils of many species. It is one of only a handful of sites in the world from this ancient era and by far the best preserved. They request removing your shoes to avoid damaging the fossils. What an experience, walking barefoot across these extremely ancient life forms. In the photo, you can make out the wavy surface of the rock. It’s obvious these are ripples are the fine grained floor of a shallow sea. Eons ago a volcanic explosion covered the area, preserving it until being recently eroded away. You can only imagine the millions more fossils in the layers still covered in the cliffs just yards away. 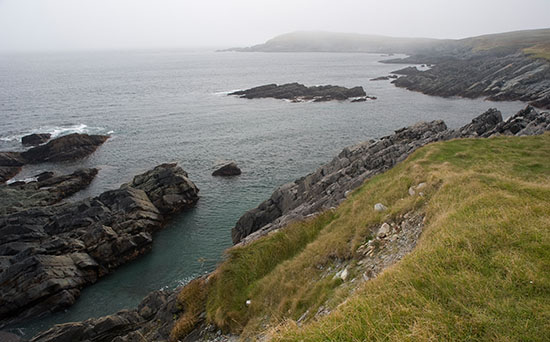 Mistaken Point in the foggy distance. Ships occasionally mistook it for Cape Race to the east, running aground on this rocky coast. 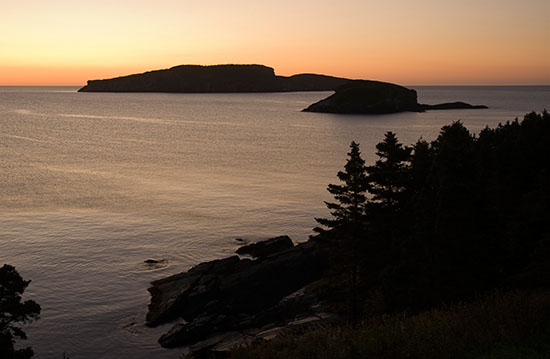 Newfoundland is not just unique for it’s wildlife, it’s geology as well is fascinating. Prior to 11,000 years ago, it was covered by an ice sheet a mile and a half thick. The incessant movement scoured the land down to bedrock, leaving an island of poor, rocky soils. Google Earth provides a good vantage point for understanding this geology. 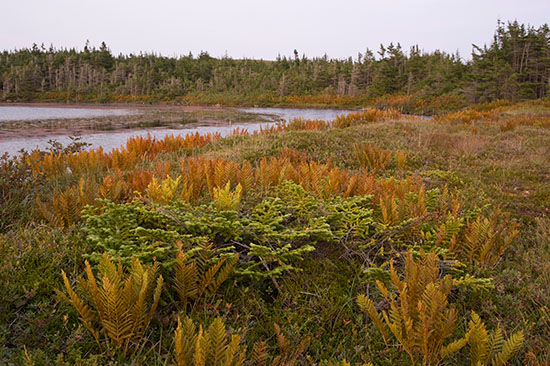 The bogs of the Southern Avalon Penisula.

This isn’t to say Newfoundland is barren. By no means! There are dense forests, innumerable ponds, and vast areas of bogs, spongy to walk on, densely covered with low vegetation, berries and small evergreens. The amazing Pitcher Plant is common. Little wonder it is Newfoundland’s provincial flower. Bugs get trapped and are digested by a whole plethora of organisms in the water inside the pitcher, nourishing the plant in the poor soils of the bog. 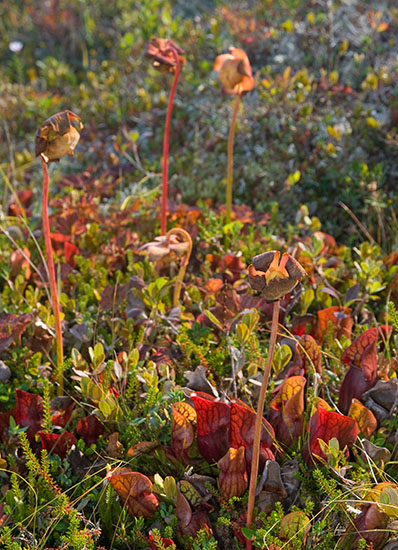 Pitcher plants and their flowers.

Newfoundland is a unique island. Being about the size of Pennsylvania, there is so much more to experience. We want to see the north, where the Vikings landed, and especially the west coast with Gros Morne National Park.

We will return, if not for it’s wildlife and incredible scenery, then for it’s vast, unspoiled landscape, it’s fresh seafood, it’s photogenic fishing villages, and it’s unique culture and wonderfully warm and friendly people.

And somehow, despite the month spent here, we never managed to get screeched in. We have to return to become honorable Newfies by pushing back that shot of the vile rum called Screech, by exclaiming the Newfie blessing, “Long may your big jib draw!” and by kissing that cold, wet, clammy cod. 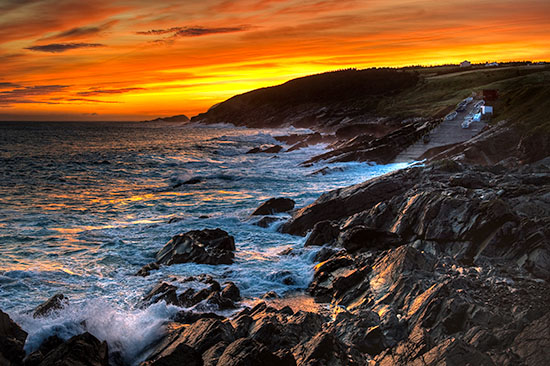 Sunrise over Pouch Cove on our last morning in Newfoundland.