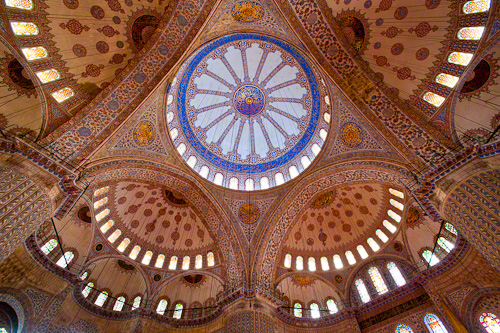 Like its famous Dervishes, Turkey is a whirlwind of culture, history, people and color. It is at once ancient and modern, traditional and sophisticated, religious and secular. A land of contrasts united under one religion, Islam, with a history reaching back to the dawn of civilization.

Istanbul, Turkey’s greatest city, is our introduction into the country’s deep, fascinating history and famous hospitality. It is a bustling megalopolis of 17 million. My first impression is of a clean, modern, city of broad avenues, low hills and a skyline punctuated with the needle-like minarets of numerous mosques rising out of the surrounding masses of multi-level apartment buildings. 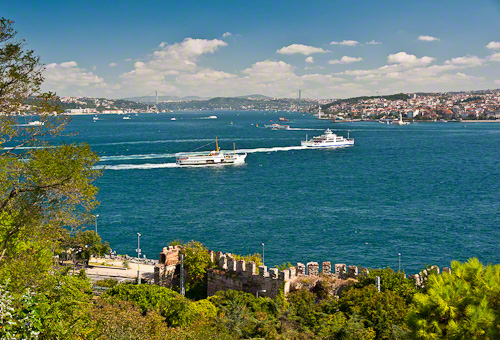 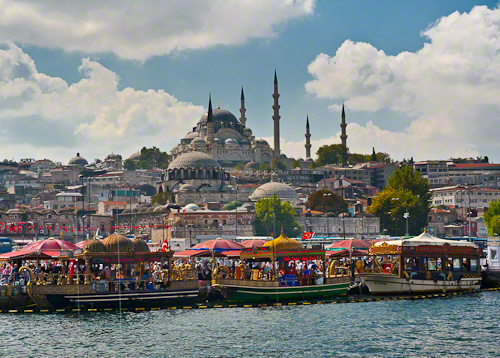 Along the Golden Horn

The highway runs east along the north shore of the Sea of Marmara. This broad sea, along with the Bosphorus, separates Europe from Asia as well as dividing Istanbul. The narrows of the Bosphorus, leading to the Black Sea lie in front of us. A broad, tree-lined park with recreation path extends for miles along the shore leading us to Sultanamet, the age-old quarter of Istanbul.

Turning off the highway, we pass through Istanbul’s 1,700 year-old Byzantine walls into a maze of crooked streets lined with restaurants. Men, appearing as timeless as the walls, sit in groups around low tables smoking nargiles, the classic Turkish water pipe. 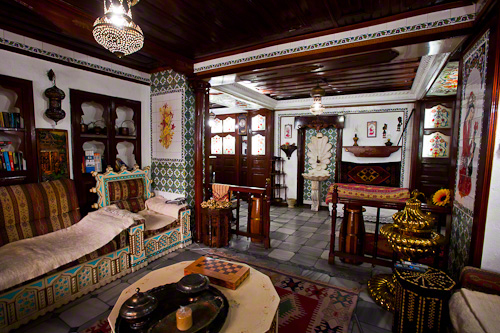 The timeless lobby of the Turkuaz Hotel in Sultanahmet

Our driver deposits us in front of an Ottoman mansion from the mid-nineteenth century, the Turkuaz Hotel, appropriately painted bright turquoise. Walking down a level through a cool, tree-shaded courtyard, Yolanda and I enter the lobby, stepping into another. Here we find the esthetic of exotic Turkey; marble floors, walls tiled in colorful, geometric designs, dark, wooden pillars supporting a low paneled ceiling, pillowed benches lining the walls. Ottoman lamps, like large jewels, hang from the ceiling.

Marilena, the manager, speaking lightly accented English, shows us to our room, The Sultan’s Room. It is beautiful in its decadent thick, velvet drapes and crystal chandelier. Though not a large or expensive room, it is richly appointed with frou-frou chairs, lamps, dark-wood cabinets and a curtained window seat which Yolanda immediately usurps for a jetlag induced nap. 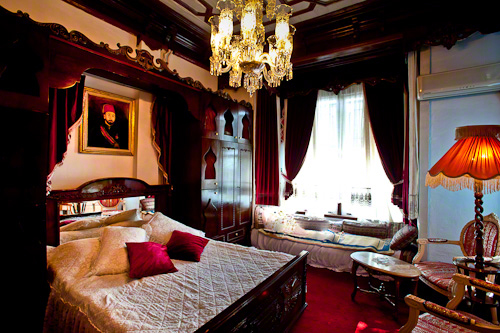 Our room, The Sultan’s Room

Two delicious hours later, we are awakened by the first, of what will become innumerable Ezans, the calling of the faithful to late afternoon prayer. Rising and washing, we set out for some sight seeing and later dinner at a nearby restaurant Maria recommends. 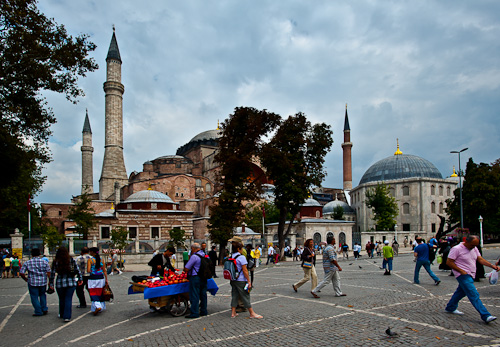 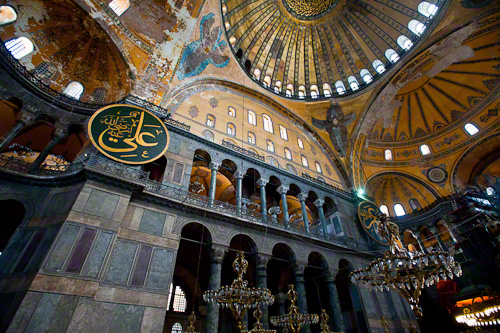 The enormous interior of the ancient Aya Sophia built first as a church in 537 CE converted into a mosque after the fall of Constantinople in 1453. They are just now uncovering the angels in the corners and other beautiful, Christian mosaics after hundreds of years. Islam does not permit the depiction of humans or animals in their mosques.

Tahiri Cesme, meaning historical fountain, is a find. The street-side tables beneath the shade of a broad grape arbor quickly fill with tourists and Istanbulus alike. The restaurant’s namesake fountain sits beside the street while an ancient, Byzantine wall forms a backdrop. 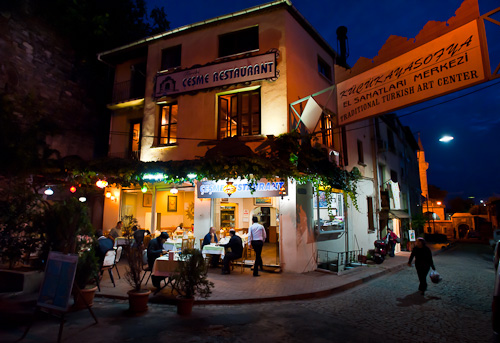 Perhaps ten different Meze, Turkish appetizers, are brought on a tray. We pick a spicy eggplant dish and another of a yogurt-based sauce similar to Greek tzatziki. A scrumptious, flat bread puffed and piping hot from the oven appears and we begin our first meal of renowned Turkish cuisine: chicken kabap for $6 and the house special lamb kabap for $8.

Traffic flows sporadically along the cobbles of the ancient, narrow street barely wide enough for two cars. The occasional truck or bus stops to negotiate the sharp corner, clogging traffic and causing honking and much entertaining arguing. As night descends, we finish our meal with the traditional, small, glass cups of hot Turkish tea and head up the winding street to the old, Roman Hippodrome and Istanbul’s famous Blue Mosque. 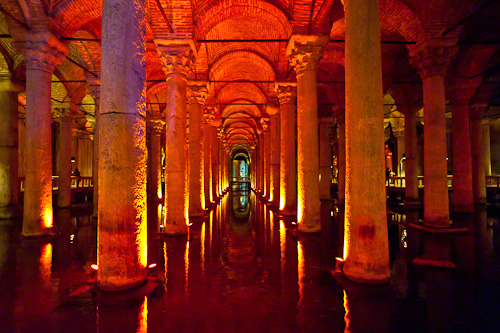 A few of the 336 columns of the labyrinthine Byzantine cistern built by the Roman Emperor Justinian in 532 CE, filled in over the centuries ago and discovered in 1545. Fish still swim in the waters. 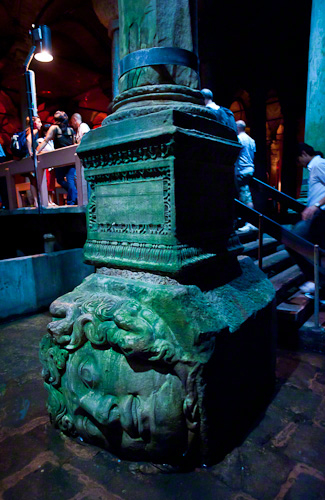 The Romans recycled columns of various styles from earlier periods for the cistern. Here, a sideways Medusa capitol serves as a base. After all, everything was going to be underwater. No need to pay attention to style.

The long, narrow, well-lit plaza of what had been the city’s chariot racetrack two millennia ago, is quiet. A few couples stroll between the monuments. An ice cream vendor fills an infrequent cone. Men, sitting among large pillows along the thousand-year old walls talk quietly, drawing an occasional breath of pungent tobacco from a large nargile.

Meandering along, we find ourselves in the entry courtyard to Istanbul’s largest and most famous mosque. The Blue Mosque or in reality, the Sultan Ahmet Mosque built by the sultan in 1616, is a sublime structure. Six elegant minarets rise high above the multiple domes, dramatically lit against the night sky. 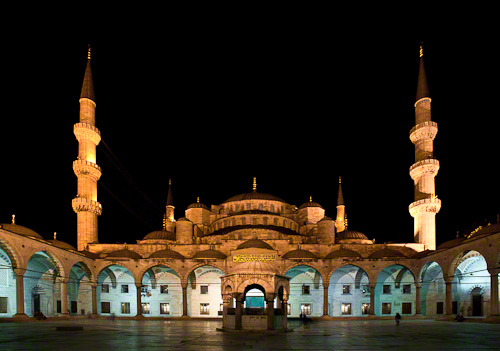 The quiet, exterior courtyard of the Sultan Ahmet Mosque with four of its minarets.

The sacred silence is punctuated occasionally by the click of high heels on stones. Several tourists murmur in a far corner. The occasional shutter clicks. Suddenly, the Ezan, the call to prayer, explodes in the courtyard; one long, loud, unbroken phrase: Allahu Ekber-Allahu Ekber-God is great-God is great.

It is spine tingling! Then the night turns magical as the Ezan is echoed from a distant mosque. The two Muezzin trade phrases back and forth until once again, silence reins over the ancient city. We could not have had a more beautiful and appropriate introduction to Istanbul.