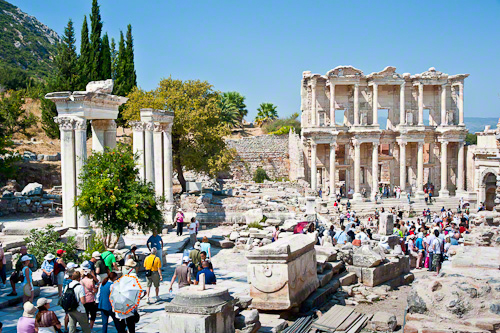 The ancient Roman Library at Ephesus

While grape vines and plump clusters of fruit shade us from the morning sun and orchards of figs and almonds stretch to the steep mountains a mile away, our group sits at one long table, sharing breakfast as an ages-old fortress stands sentinel from a high ridge. In this idyllic setting, exhaustion from prior intense days disappears with cups of thick, Turkish coffee. 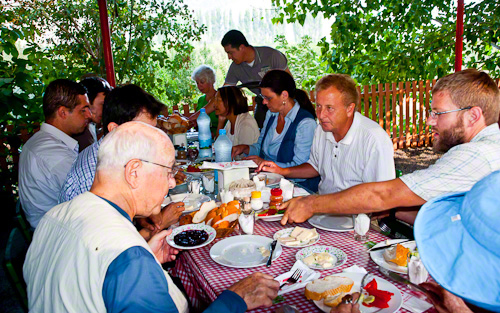 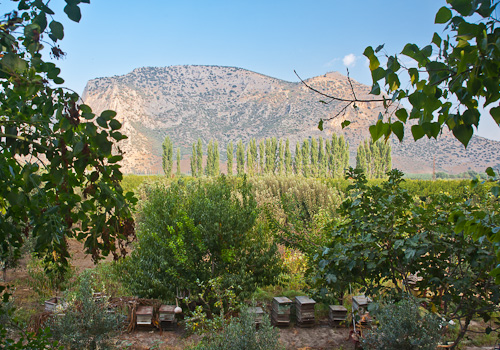 Olives, cheese, tasty, ripe tomatoes and bread slathered with local honey, complete the meal. Upon arriving in Izmir, Biblical Smyrna, Turkey’s third largest city, we were whisked from the airport to this lovely setting on our way to tour the ruins of an ancient city. 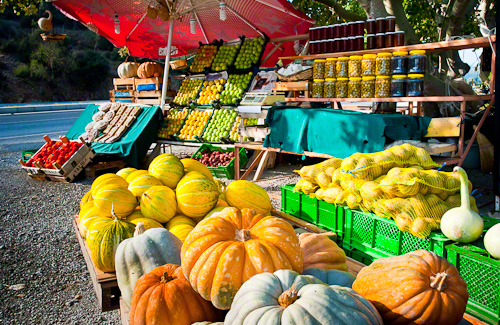 Efes, its Turkish name, was a major crossroads of the Roman Empire. Formerly a port city, silting over the centuries has pushed the Aegean Sea over three miles away. The apostle Paul walked these streets, preaching his gospel to the Ephesians two millennia ago.

It must have been an impressively, beautiful city with broad streets, tall, elaborately carved, marble buildings, numerous statues, gushing fountains, two large amphitheaters, one holding 25,000, and one of the greatest libraries of the ancient world. 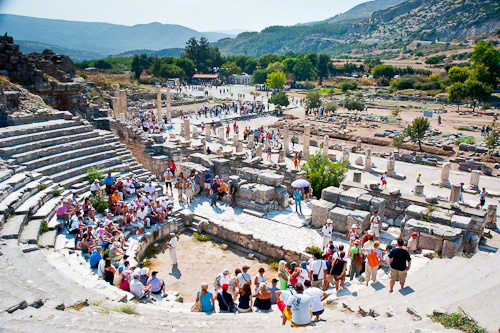 The smaller of the two amphitheaters 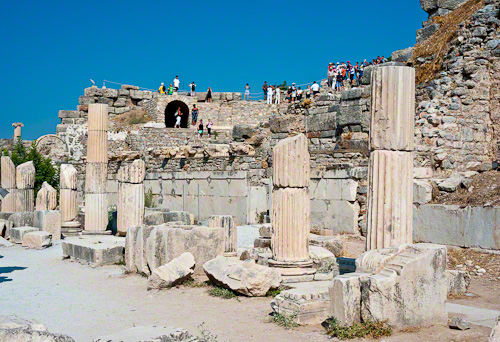 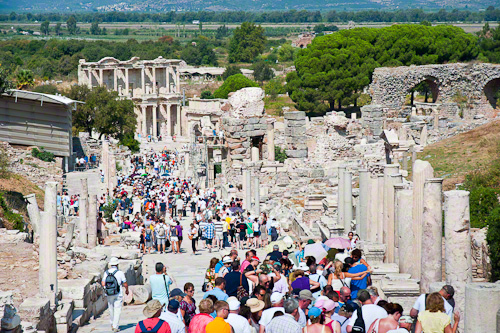 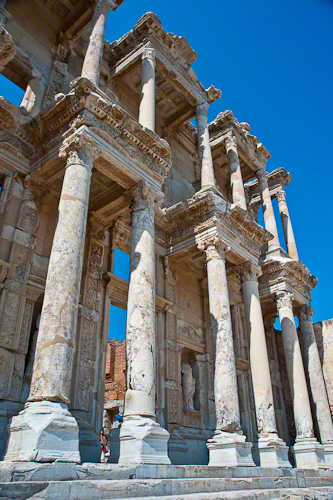 The facade of the library

We spend hours wandering the ruins, peering through broken doorways and climbing ancient steps. Ephesus was a diamond in the emperor’s diadem, a city of wealth, power and knowledge.  Excavations are still underway.  The city is much older than the Romans and there is much left to unearth. 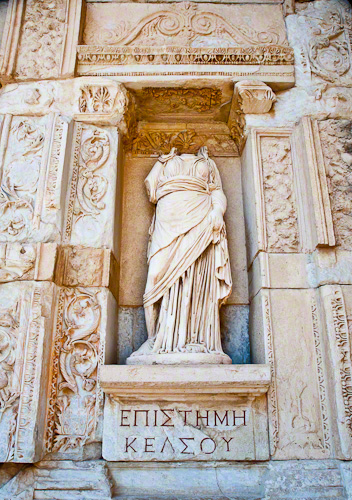 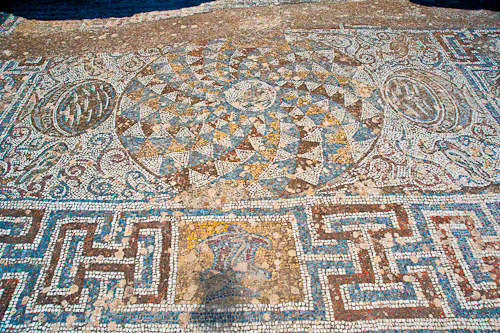 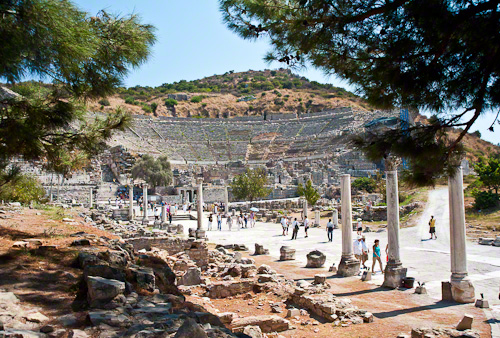 The larger of the two amphitheaters

We return to the shade of the orchard restaurant for lunch. Afterwards, I snag an empty, pillowed platform used for traditional family meals, and doze off. All to quickly, we’re off again, this time to a small, ceramics manufacturer specializing in exceptional, definitely not cheap, hand-made pottery.

I watch the demonstrations, photographing the women painting the vases and plates while Bruria Finkel, the artist of our group, puts on a demonstration of her own, turning a bowl. The showroom displays thousands of dishes in numerous styles but Yolanda and I pass while others buy. We loaded up on ceramics while in Mexico last year. 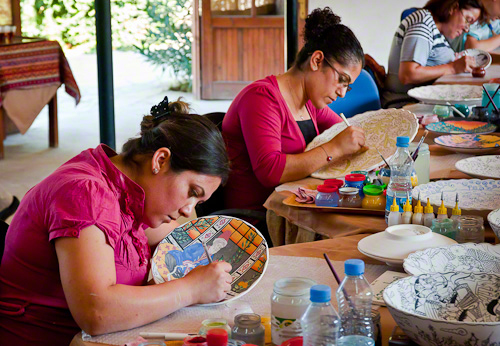 Hand-painting the ceramics at Art Ceramics 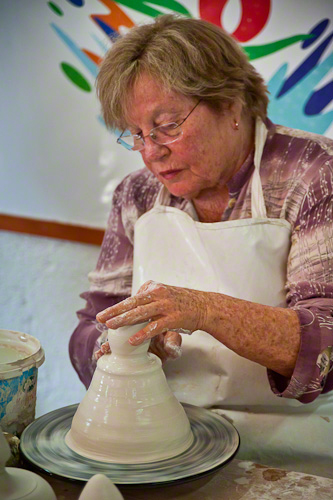 From the heat of the coastal plain, we drive into the cool mountains immediately to the south of Efes where, according to legend, Jesus’ mother lived out her days. As we climb, I catch occasional glimpses of the dramatic Aegean coast, a deep, blue sea colliding with rocky cliffs.

The shrine is near the top of the mountain shaded within a thick wood. Pilgrims from around the world make their way here. The surface of a long, high, rock wall, is blanketed with prayers in the form of millions of slips of paper; dazzling white against the forest in the late afternoon gloom. 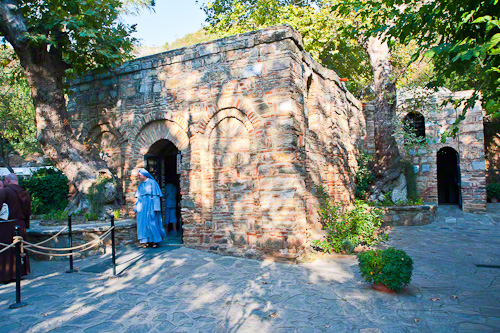 A nun exits the purported House of the Virgin Mary 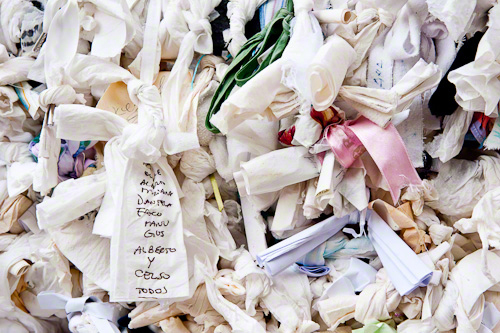 A tiny section of the high wall covered with prayers

Returning to Izmir with the setting sun, we meet our sponsors at a local restaurant. We are beginning to understand the reason for the cultural exchange: it is not simply to meet local leaders and learn about Turkish culture, but also to gain an understanding of the Gülen Movement, an Islamic group seeking interfaith dialog and understanding between peoples. 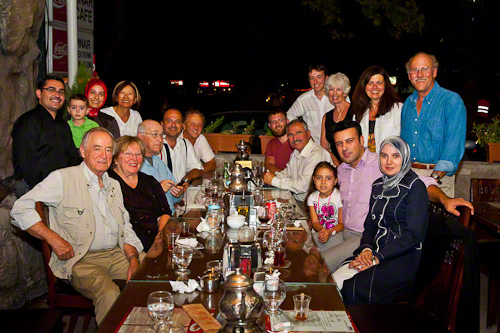 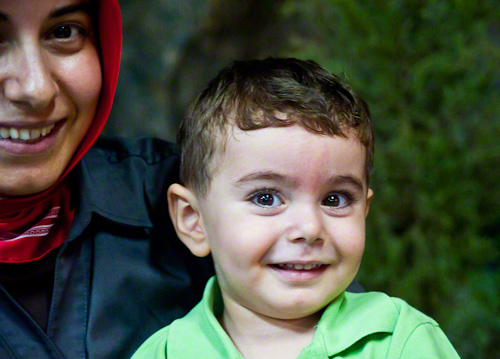 Two year-old Mehmet with his mother 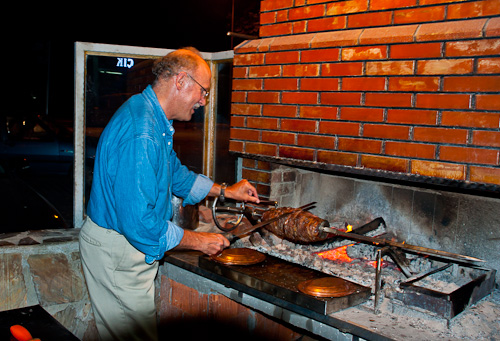 Me, taking a turn a carving kebap, man was it hot!!

Fethullah Gülen is a Turkish intellectual now living in Pennsylvania. His writings have inspired a movement, said to have the sympathies of 75% of Turks. One of its primary goals is education. Later, we are to visit several schools and a university built by the movement.

Following another evening of interesting conversation and too much good food, we reach our hotel and crash, Yolanda and I sleeping through breakfast. Little is planned for the next day; lunch, a stroll through the bazaar, dinner with local families. 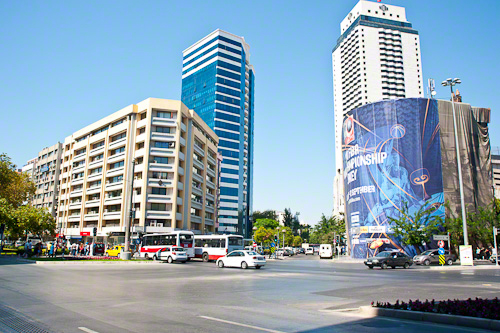 Streets of the modern, port city of Izmir 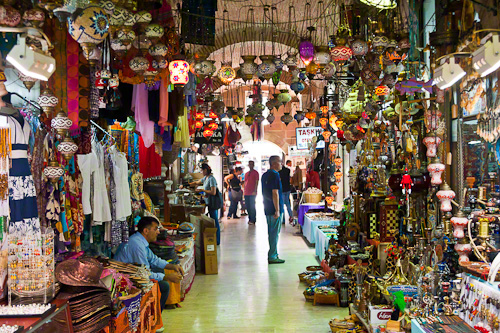 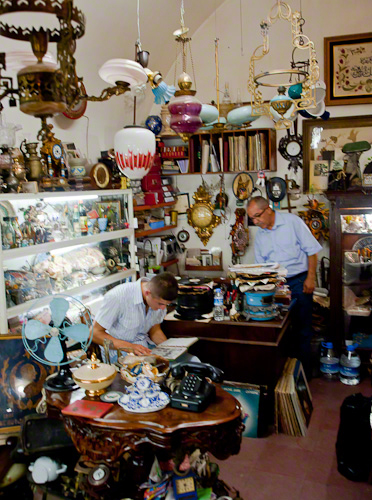 An antique shop in the bazaar 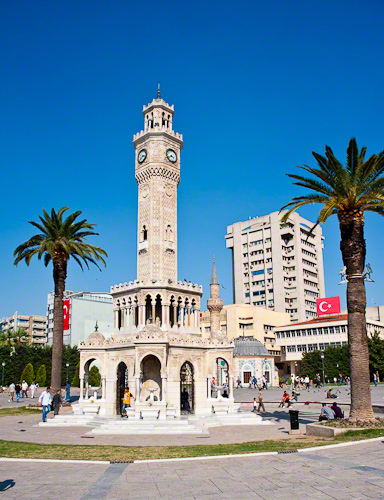 Along the waterfront in Izmir 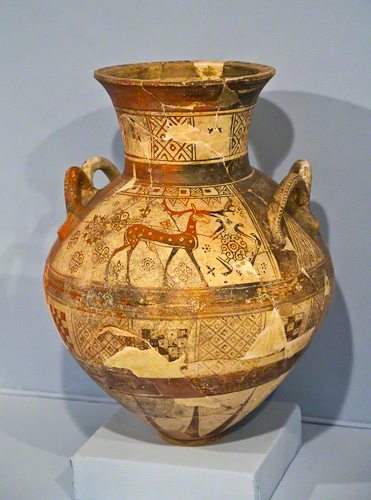 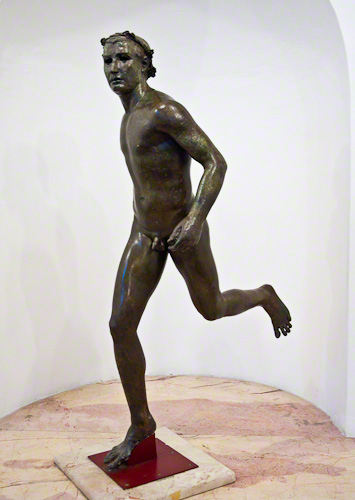 The following day, we fly to Antalya, a resort city on Turkey’s southern Mediterranean coast. As the plane approaches, a large, sapphire bay appears with an immense, mountain range thrust steeply from the sea; a western barrier disappearing into the haze. The Taurus Mountains are one of Turkey’s important ranges. Around Antalya, its tree-less peaks rise abruptly to over 11,000 feet. This is something I find over most of the country: Turkey is very mountainous but from the base to the peaks they are mostly bare. Strange. 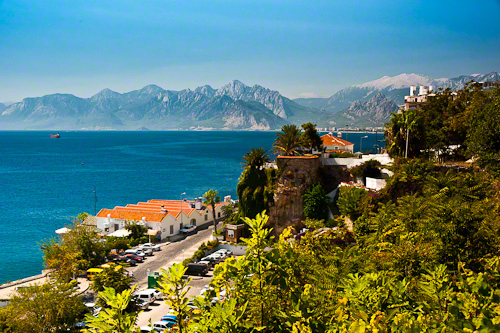 The Taurus Mountains from Antalya

Along the coast, Antalya is a postcard of Mediterranean beauty. Red tile-roofed, stone houses beneath a clear, blue sky tumble down the hillsides to an azure sea. Small harbors dot the coast along with broad beaches. The covered terraces of restaurants provide welcome relief from the heat along with awesome coastal views. 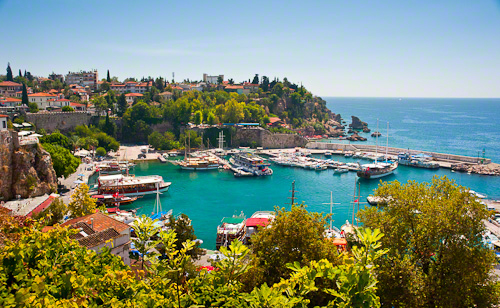 We stop for lunch at one of Antalya’s wonders, Duden Waterfalls. Spring-fed waterfalls cascade through a narrow defile amidst a series of rock grottos. Copious trees shade outdoor restaurants along the river while the rushing water furnishes natural air conditioning. 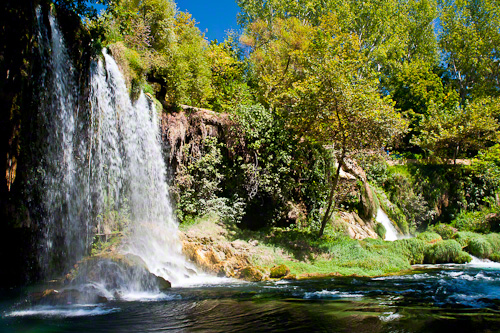 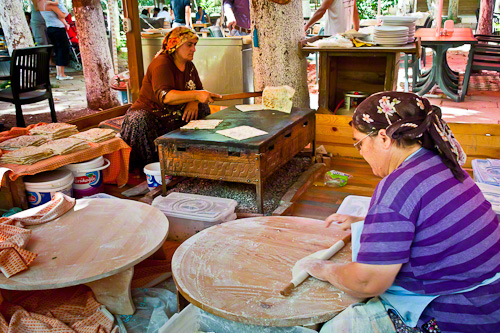 At one of the restaurants at Duden Falls 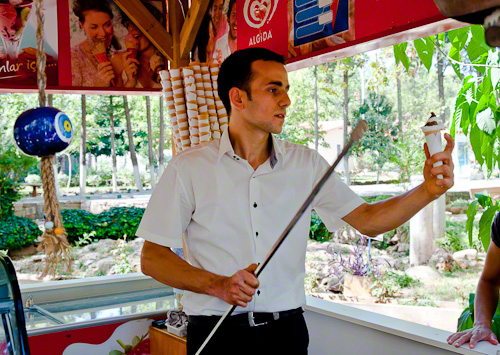 Selling ice cream is a performance in Turkey, sometimes a way too expensive performance 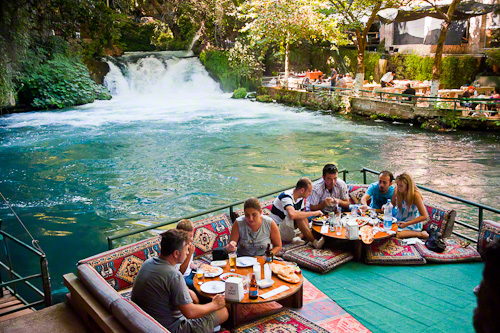 A leisurely lunch ensues; delicious, grilled fish, fresh from the Mediterranean. To our regret, we must forego exploring Antalya’s Mediterranean beauty and ancient wonders. Local leaders await us for dinner in Konya, a mountainous, four-hour drive north and the former home of Rumi, Islam’s most revered poet.

Despite the valuable insights Turkey’s historical sights provide into its history and culture, the privileged meetings with the people of today’s Turkey round out our experience in ways not accessible to the average tourist. We leave Antalya anticipating another fascinating evening.