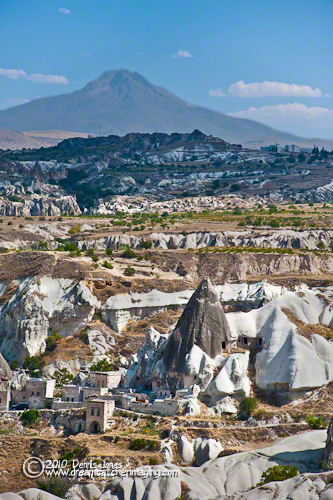 Next on the agenda is the incredible, in the truest sense of the word, fairytale landscape of Cappodocia. First though, on the road from Nigde to Cappodocia, a tour of the subterranean world of Kamakli. 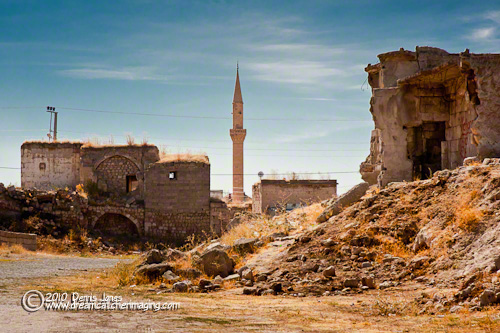 According to the Turkish Department of Culture, the Phrygians began the complex of underground cities, carving them from the soft, volcanic rock of the region in the 8th-7th centuries B.C.E.. They were greatly enlarged in the Byzantine era and perhaps sheltered the early Christians from Roman persecution. In the 6th and 7th centuries C.E., Christians, fearing Arabs raiders, used them as well. More than 200 underground cities, many connected through miles of tunnels, have been discovered between the towns of Kayseri and Nevsehir. Only a few are excavated and open to tourists. 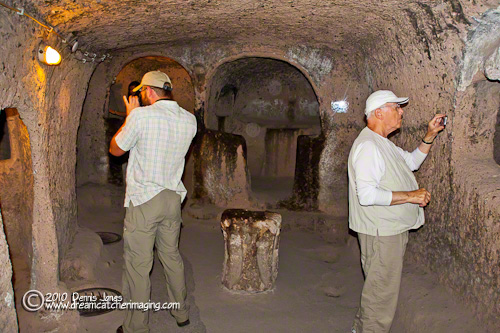 Casey and David photographing inside what was the church. 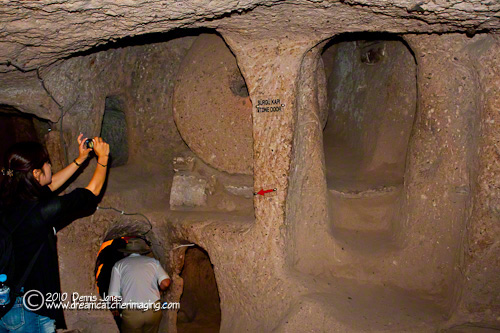 One of the stone doors which was rolled into place in times of danger. The hole in it’s center allowed the defenders to shoot arrows at the attackers.

The Kamakli underground city is a labyrinth of rooms. Stables, passageways, kitchens, wine cellars, air vents and churches extend eight erratic levels below the surface. Only four levels are currently open. The city is cleverly excavated to allow airflow from the surface. Smoke from the cooking fires was absorbed by the soft rock, hindering detection. Up to 3,000 people took refuge for months at a time.

Another nearby underground city, Derinkuyu, an eleven level complex, is believed to have housed as many as 50,000! It must have been a cramped, uncomfortable and desperate existence with little privacy. 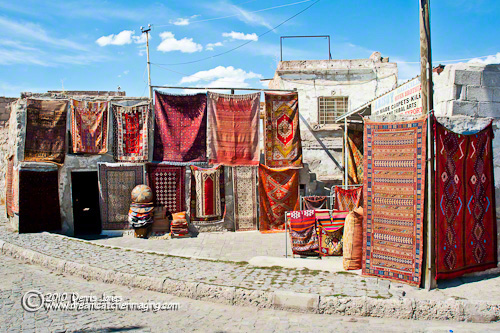 Selling carpets outside the underground city

A short drive takes us to Göreme where, even though prepared, I am astounded by the amazing honeycombed, rock pinnacles of the small towns. Doors, windows and porches of homes are sculpted into the volcanic tuft. Signs adorn the bizarre formations as small shops are carved into the stone. 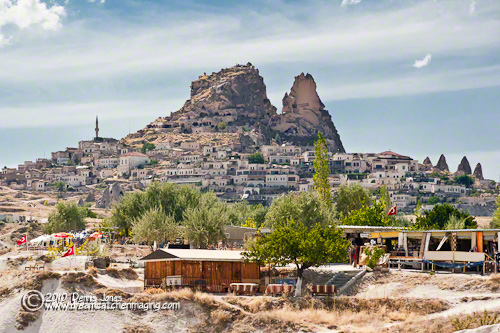 One of the towns in the Cappodocia region 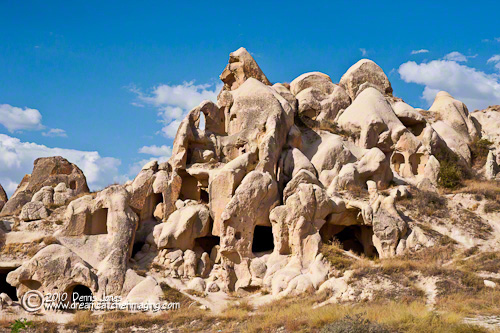 I yearn to stop as we drive by one amazing town after another. Finally, the bus pulls up in front of a large complex of stalls selling every conceivable trinket and rug. Walking between them takes us to a long cliff overlooking a panorama the like of which I have only seen in a few of America’s western national parks and monuments. 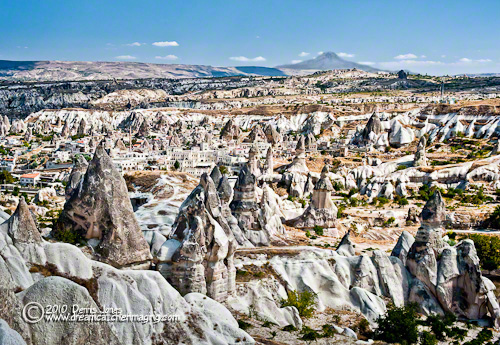 The valley stretching beneath is a complex panoply of erosion sculpted white and gray hoodoos. The hulking pyramid of an extinct volcano, the likely source of all this tuft, lurks in the distance beneath a bright, blue sky. Interspersed amidst this bizarre landscape are houses, shops, mosques and large hotels. Homes have been hewn from most of the rock formations. I can only imagine their interiors. Many pinnacles are hotels. Rooms can be had for a little as $50 a night with rooms in the higher-end hotels going for hundreds of dollars a night. 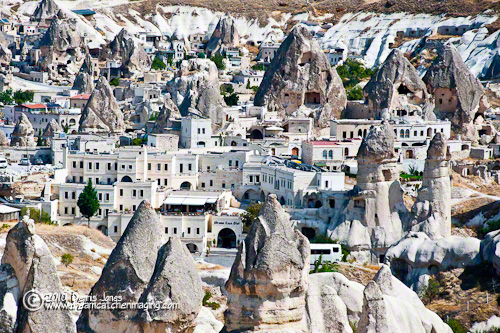 A hotel set within the valley 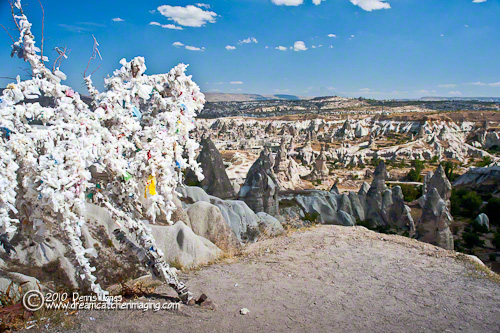 We are allowed an all to brief stop and sadly, no chance to descend and walk amongst the incredible formations of this fairyland-like town.

Reluctantly climbing aboard the small bus, we head to our next destination, a restaurant for lunch. And once again, nothing could have prepared us for what we are to experience.

As we pull into into the large parking lot, little is seen but a brown ridge covered with dried grasses and low bushes. It is fall after all. Rounding a corner, we encounter a spacious, stone courtyard flanked by two stone eagles leading to the finely carved, columned entrance to Uranos Sarikaya, where we are to eat. 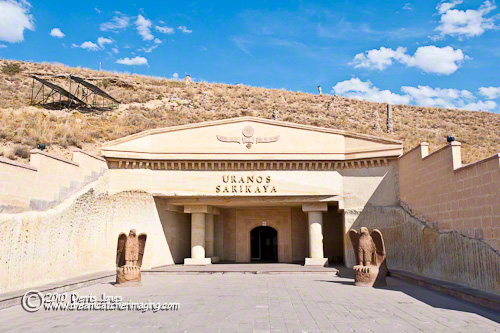 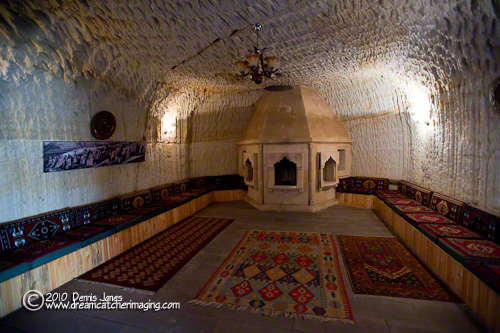 The waiting room near the entrance 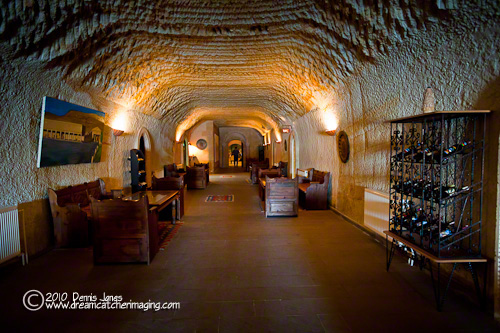 A wide, dimly lit hallway perhaps fifty yards long leads deep into the hillside. Passing through the archway at its end we enter a high, round chamber, the restaurant itself, beautifully carved from the living rock. A lone musician plays the zither in the subdued light at the very center of the circular mosaic floor, sitting within concentric circles of elaborate design. Five chambers, each with stone six tables seating ten diners extend like spokes of a wheel from the mosaic hub. Everything, the tables, benches, railings, columns and doorways are carved in place from the stone of the mountain; truly beautiful craftsmanship. This must provide a taste of what the homes and hotels must be like. 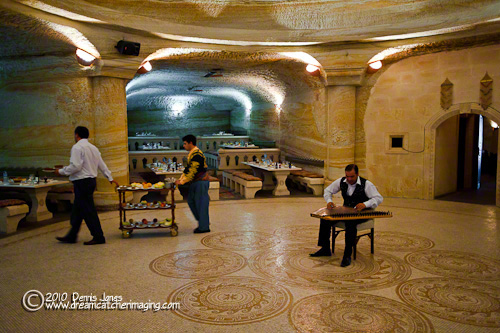 The cooks arrive with once again, too much delicious food and any frustration over the short time spent viewing the valley is forgotten. 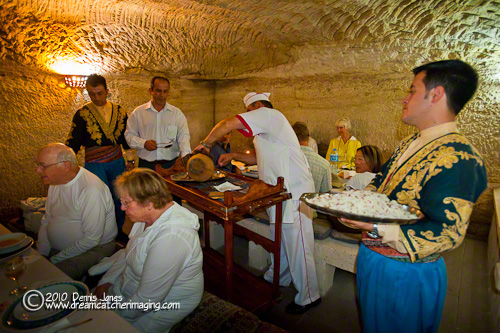 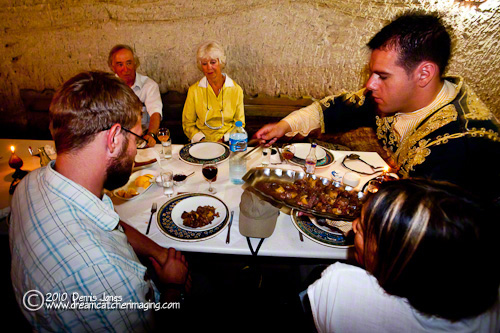 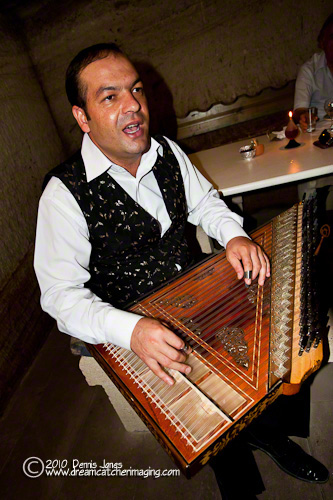 The zither player serenades us at our tables with traditional songs 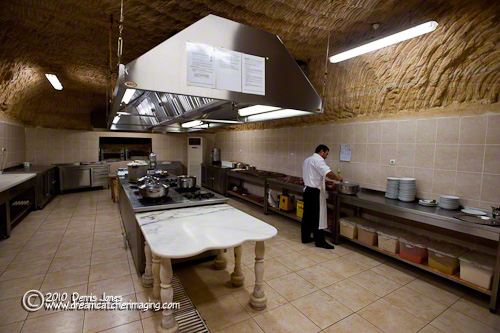 The kitchen off the entry hallway

Following lunch we return to the area of Göreme for what, according to the guide books, is an imperative; the Göreme Open-Air Museum, a UNESCO World Heritage Site. The museum is a monastic complex of Byzantine refectories and churches carved into the rock between the 9th and 12th centuries C.E.. 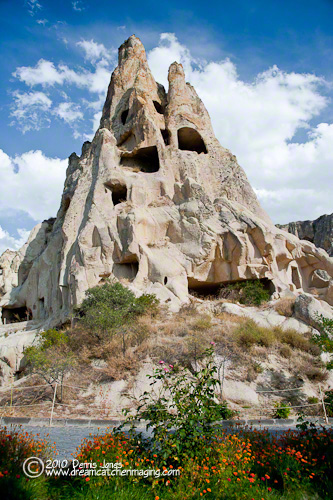 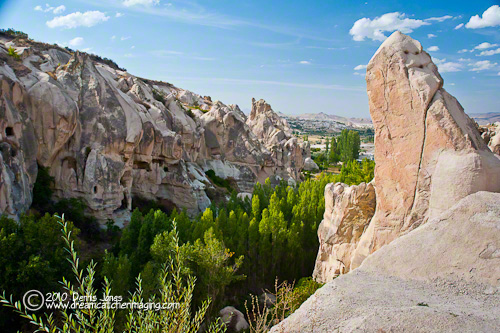 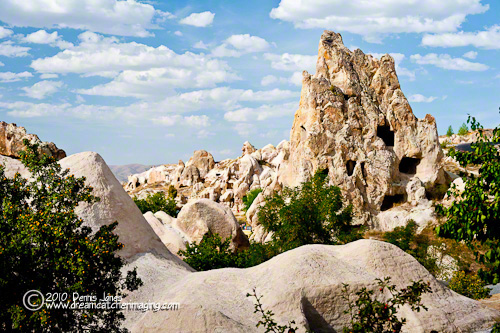 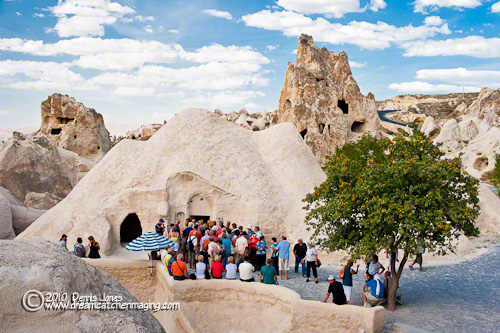 Crowds waiting to enter one of the churches

Once again, fantastic shapes abound. We have time to enter only a few of the eleven or so tiny, 12th century churches. Vivid, colorful frescoes, most in exceptional condition, adorn the walls and ceilings. The love, talent and stupendous time and effort is humbling and awe-inspiring. 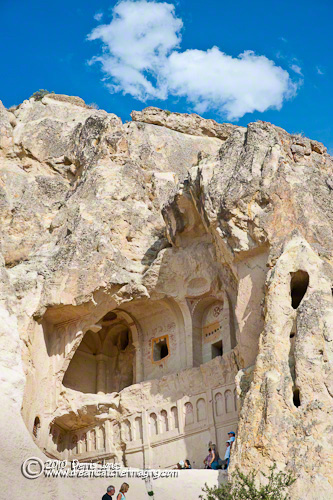 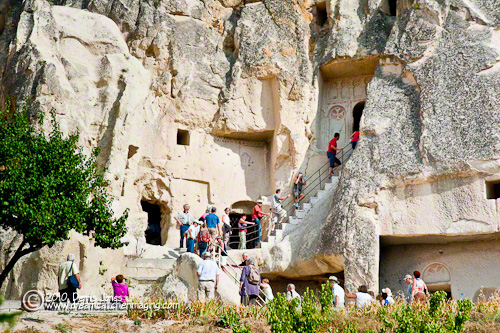 Unfortunately, again, I am not allowed to photograph inside the churches. Even though with my cameras, I wouldn’t need to use flash, it is understandable. If allowed, thousands of flashes would go off every day. This continual assault would degrade these thousand year-old treasures in no time. Here are links to some photos of the frescos taken without flash. It gives a taste of the beauty of the work as well as more history: http://www.goreme.com/goreme-open-air-museum.php and http://www.sacred-destinations.com/turkey/cappadocia-goreme-cave-churches

Sadly, our itinerary doesn’t include a night here. We have another several hour drive to Ankara, Turkey’s capital, to catch a night flight back to Istanbul for our final few days with this amazing group of new and extremely interesting friends. I have to be satisfied with a morsel of what Cappodocia offers. Truly, this region of Turkey is so phenomenally otherworldly that I must return and spend days wandering its valleys, exploring its ancient wonders and photographing its bizarre, fairytale formations. 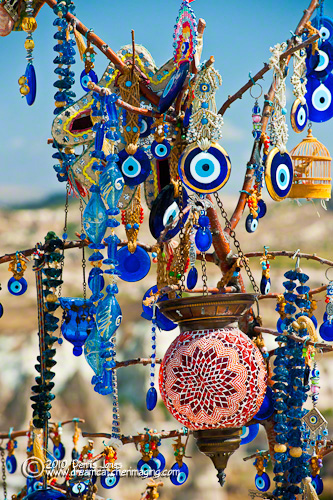