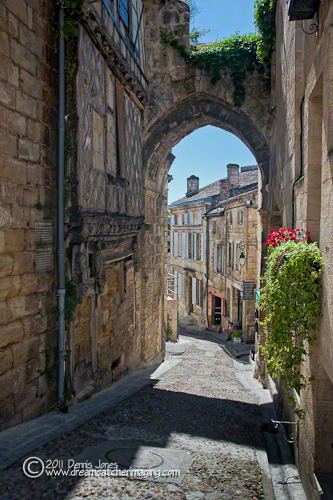 The brilliant sunshine of a southern France spring plays across vast, rolling fields of venerable grape vines. Row upon row march up and over the undulating landscape of the Dordogne Valley with military precision. Where the land is flat, their perfectly straight files disappear into distant trees or perhaps one of the many, age-old Châteaus dotting the horizon and hilltops. In the distance, an ancient steeple among a cluster of stone buildings rises out of the vineyards denoting a village. 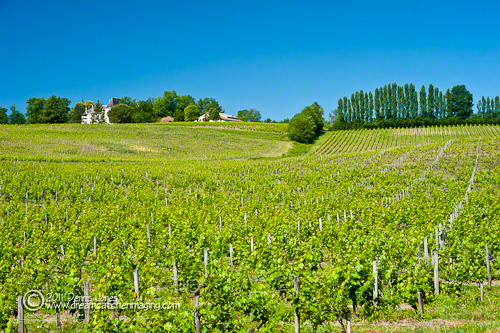 A typical village in the Dordogne Valley near Saint-Emilion. 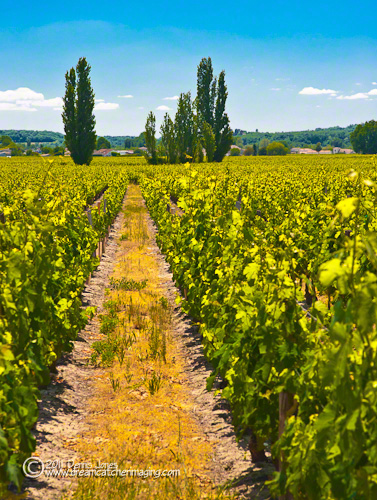 Driving the two lane, back roads of northeastern Bordeaux is a journey into 18th century France. The landscape has changed little over the centuries-a few, widely dispersed towns, tiny villages set among vast battalions of bright, green vines, here and there islands of trees, and of course, the ubiquitous, elegant Châteaus.Market day in the town of Libourne on the way to Saint-Emilion. 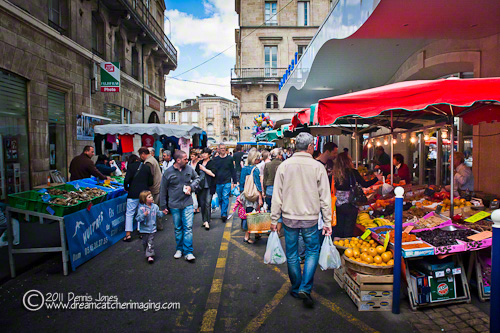 A baker in his mobile boulangerie selling scrumptious breads on market day in Libourne. 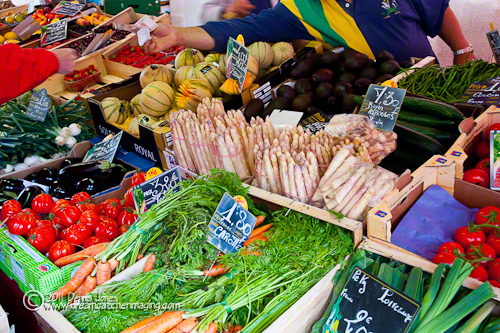 Blossoming rose bushes adorn the ends of many rows. Besides providing a contrasting touch of color, they act as sentinels for disease and fungus, an early warning system telling the farmer of possible problems in his vineyard. 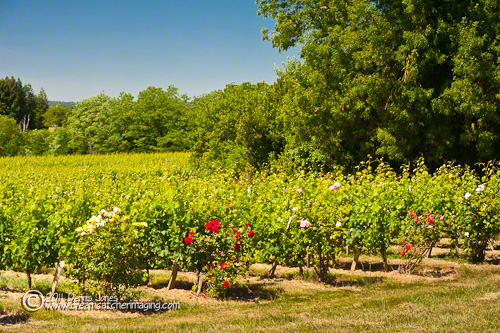 Occasional signs along the road announce various Châteaus, inviting the traveler to taste their wines, have dinner or spend the night. It is impressive to see signs for some of the most famous wines in the world. Narrow lanes between the vines lead to the elegant facades of Château Ausone, Château Cheval Blanc, Château Figeac, Château Magdelaine, and Clos Fourtet, all members of the elite classification, Premiers Grands Crus Classés. 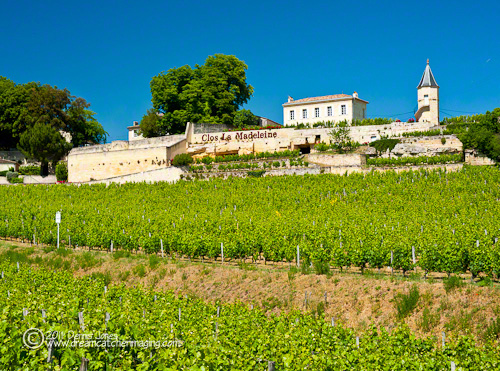 The ruins of an ancient church greets visitors as they approach Saint-Emilion.

The town of Saint-Émilion, the center of the world famous Appellation Saint-Émilion Controlee and a UNESCO World Heritage Site, lies now only a few kilometers away. The Bell Tower of its ancient, monolithic church and the buildings surrounding it give no indication as to the scope and beauty of the town. For that, you must stop and explore it on foot. 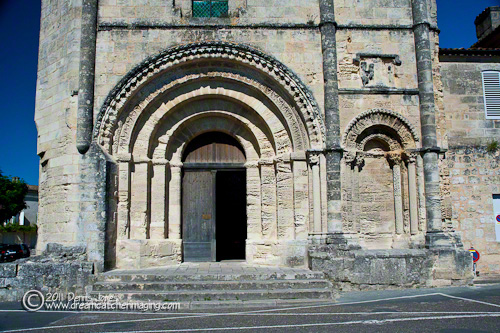 Entering a church through its age-worn portal unknowingly gives entry to the town. The cool, dark interior is lit by tall, stained-glass windows in the rear apse surrounding the chancel. Gregorian chant plays softly through hidden speakers. The effect is so beautiful and appropriate that it is a wonder more historic churches don’t take advantage of this simple method for dramatically enhancing their atmosphere. 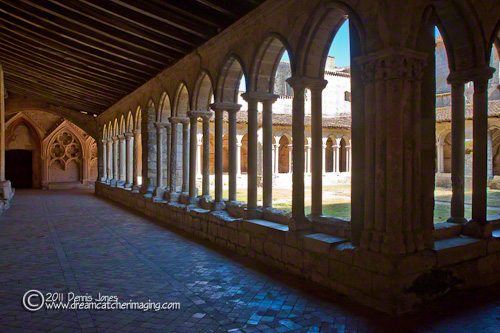 A delicately columned cloister is accessed through a side door. From there, another door leads to the Saint-Émilion tourism office and through it to a small plaza surrounding the bell tower. Umbrellas shade the tables of two cafes and beyond them is a low wall. Spread beneath the wall is a panorama of tile-roofed, stone houses and cobbled lanes, a wonderful surprise.

Saint-Émilion is set within an enormous, natural amphitheater. Rows of grape vines mark the edge of town, disappearing into the distant horizon. At the foot of the sheer cliff lies a small, cafe-lined plaza. From this limestone cliff, the underground, Monolithic Church, the largest of its kind in France, was carved by generations of devoted Benedictine monks. Over 15,000 cubic yards of rock were quarried to create the huge interior spaces. 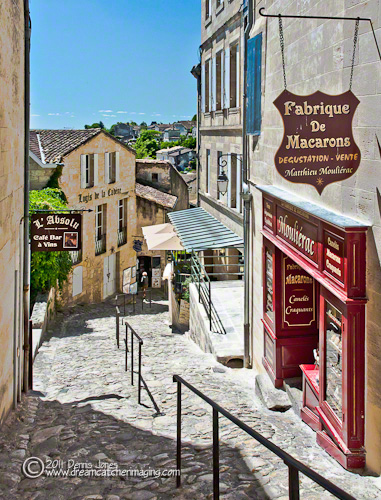 Narrow lanes, one so steep and slick a handrail is necessary, wind around and down, past stylish wine shops, to the plaza below. It seems as if the only businesses are wine shops, restaurants or macaroon stores, crunchy, multi-colored macaroons being another Saint-Émilion specialty.Establishment Martin is one of Saint-Emilion’s premier wine shops. It sells over 90 different wines and will happily provide tastings. 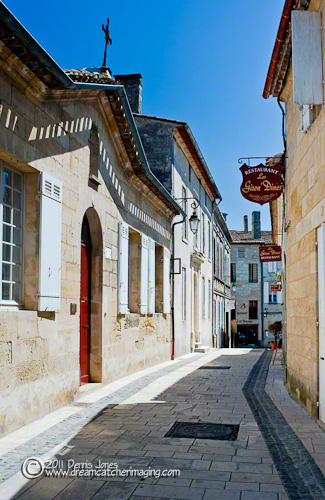 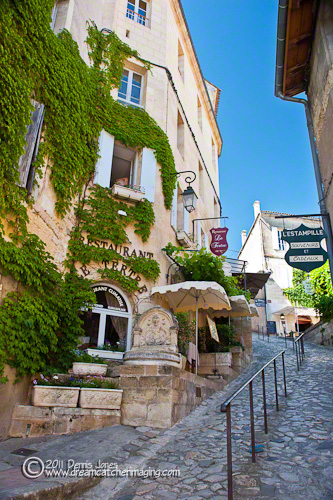 The portal to the Monolithic Church with its iconic bell tower.

The massive doors to the Monolithic Church lie at the bottom of the cliff just off the plaza. Frequent tours explore the vast interior. Past the church, more wine stores provide tastings of the local vintages. Cocktail tables with bottles and glasses sit just outside the doors of the shops, allowing casual tastings of the regions full-bodied reds as you stroll. 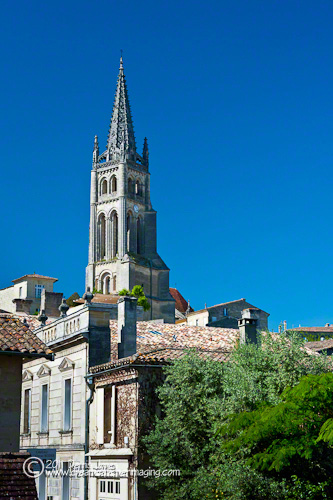 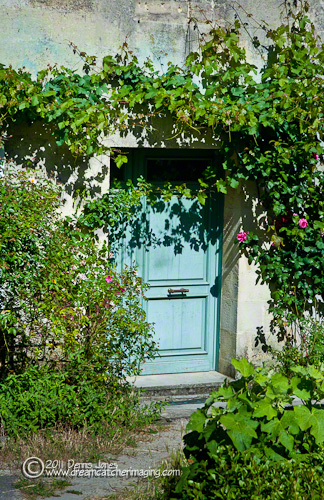 A leisurely 10-15 minute walk brings you to the vines of Merlot and Cabernet Franc grapes abutting the town. From here, you can wander in all directions to your heart’s delight, toward wineries, châteaus and beyond. 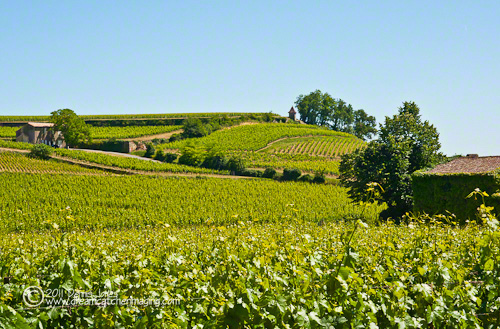 The hills around Saint-Emilion. 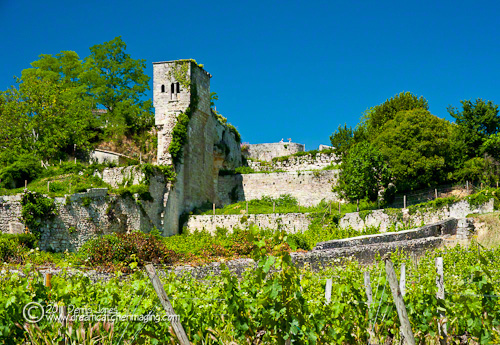 A typical grave in the cemetery of village 1 km from Saint-Emilion. 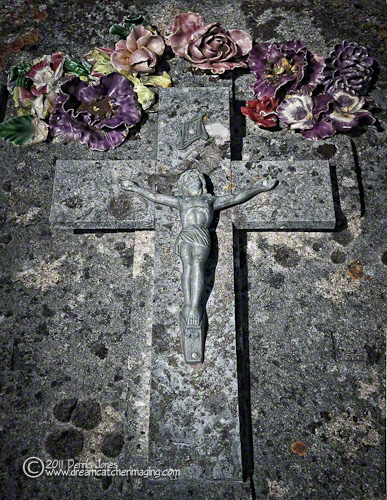 Saint-Émilion is an architectural gem. Its timeless, medieval atmosphere transports you to a previous era. Here, you will find not only marvelous, southern French cuisine and exceptional wines, but also, a sense of quiet elegance and understated self-confidence that comes from centuries of culture and a world class reputation for excellence.