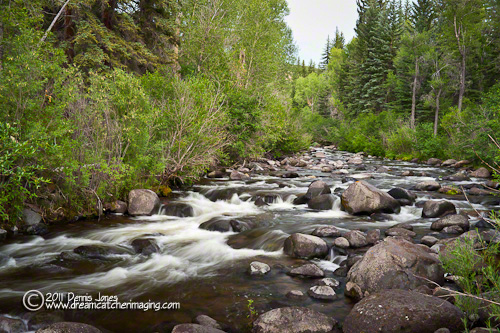 It’s been a beautiful but busy summer at Hummingbird Knob. When not at home in Vail leading the Vail Nature Center Photography workshops and attending concerts by the Dallas Symphony, Philadelphia Orchestra and the New York Philharmonic at the Bravo Music Festival, we were at our property in western Colorado, Hummingbird Knob.

Several things made for an especially memorable summer. In June, while down at the gate waiting for a delivery of wood for the pergola I added onto Nana’s Cabin, I saw a Wolverine cross the field about 125 yards away. This is a very big deal. Sightings of wolverines are extremely rare. The first wolverine ever seen in the history of Rocky Mountain National Park was only a few years ago! I have no doubt it was a wolverine.

Then in mid-July, we were visited by three Red-tailed Hawk fledglings. I had been watching their nest, watching the parents bring food to the chicks, hoping to see them flying around after they fledged and left the nest. Returning from Vail one Monday afternoon, I went to where I could see the nest only to find it empty. Then, I was extremely surprised to find one of the baby hawks almost at my feet! Over the course of the next few days we I got to see and photograph each of the three young hawks up close and very personal, even having one join us for cocktails one evening.

Later in the summer, I found a note on our gate from a mountain lion researcher who wanted to track a collared lion he’d been tracking for months. I was able to join him several times as he used his GPS to find the sites where she had stashed and eaten her kill. He is a professional tracker and I learned a lot from him about tracking and about mountain lion behavior. Fascinating stuff!

So, it’s been another wonderful summer at Hummingbird Knob. 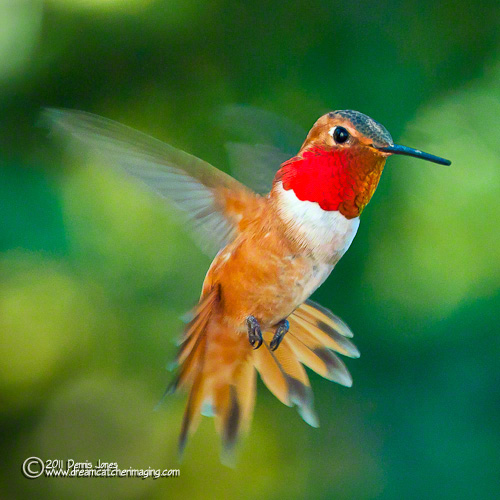 Rufus is one  of the many Rufous Hummingbirds that return every summer. Three other species make our land their summer home; Broad-Ttailed, Black-Chinned and Caliope Hummingbirds. But Hummingbirds have clearly been mis-named. They really should be called Squabblebirds ’cause that’s all they do, squabble and fight. I like to say that if all I ate was sugar and bugs, I’d be irritable too. 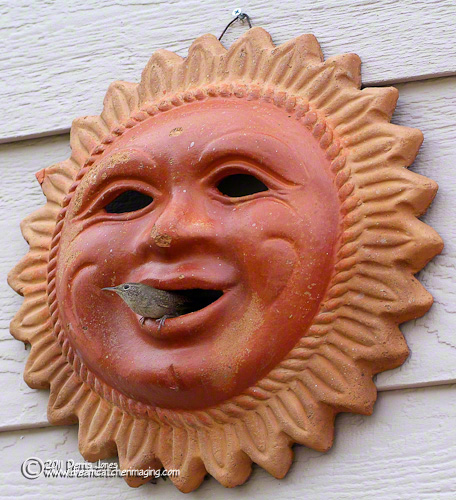 Wilbur and Wilma Wren return every year to raise their young in our sun. 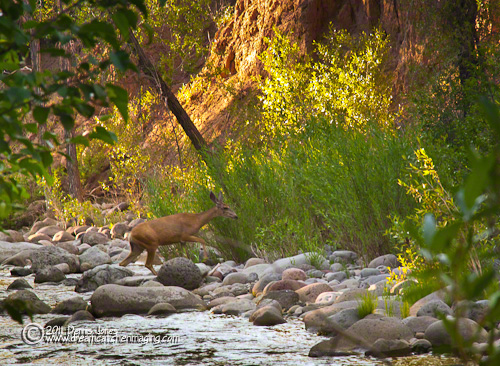 Loads of deer find safe haven around our land. 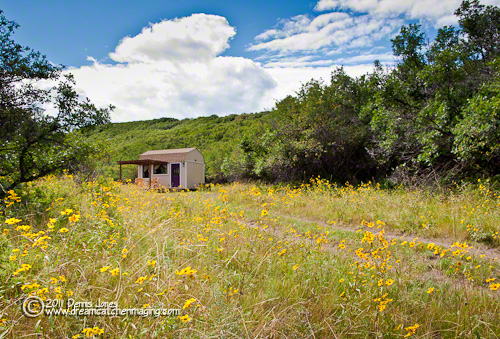 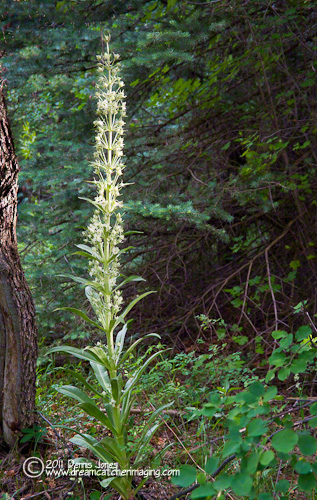 Green Gentian grow to over six feet in height. 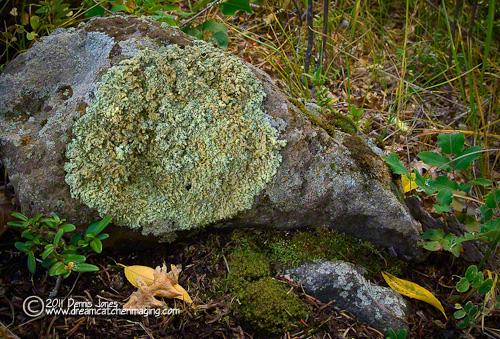 We get some pretty amazing lichen and some wonderful moss rocks. 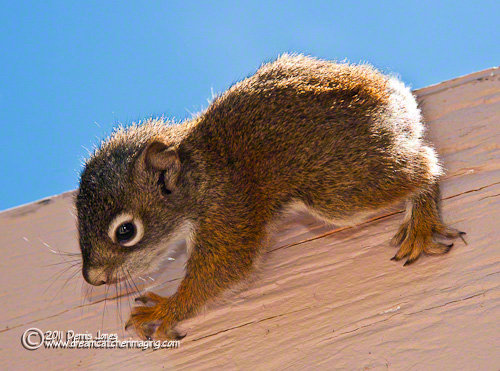 Some squirrels made their nest on my solar shower. When I uncovered it for the summer, three frightened, little youngsters held on for dear life. 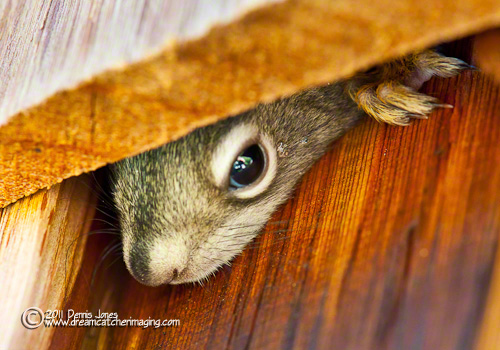 One of the babies hiding out beneath the shingles on the shower. I hope their mother was able to collect them and take them to safety. 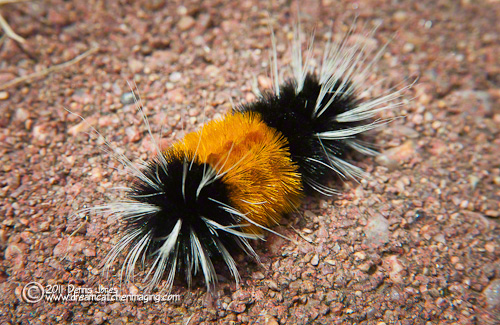 A Fuzzy Wuzzy. That’s what they call them around here. I don’t know it’s real name. 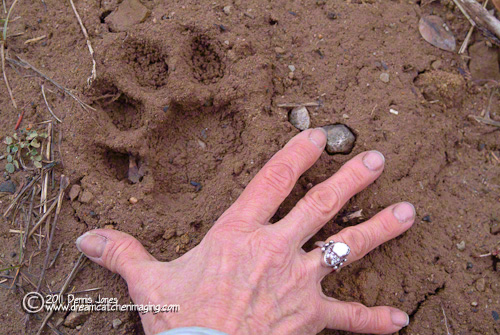 Yes, we do have mountain lions. I’ve never seen one, just tracks every once in a while. Yolanda believes she saw one on the road one evening while she was taking a walk. 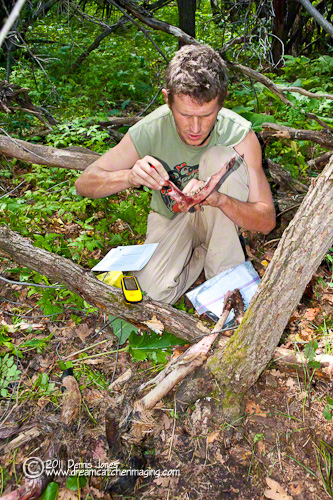 Casey, a mountain lion researcher left a note on our gate one day wanting access to track a collared female lion, Chipeta, he’d been tracking since February. Chipeta was collared some fifty miles away, had a cub that was likely killed by a tom, a male lion, (they do those sorts of things). Heading southeast, she crossed I-70, then Highway 6, swam the Colorado River, climbed over 10,000 foot Battlement Mesa and ended up around us. Amazingly, she has a real taste for Porcupines. Here, Casey is checking the marrow of a fawn she got. Later that week, I went out with him again to find a buck that she had taken only to find that she had been driven off her kill by a bear who finished her meal. 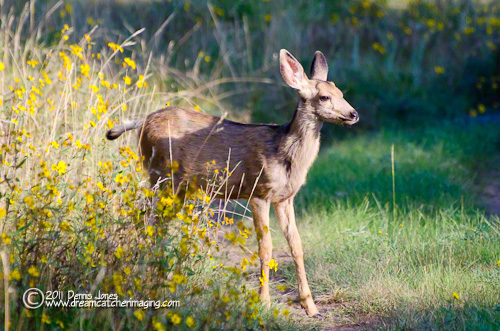 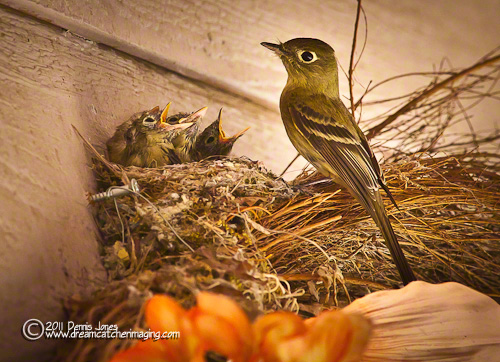 This is the second year Cory and Cordelia have raised a brood here. They’re Cordilleran Flycatchers. 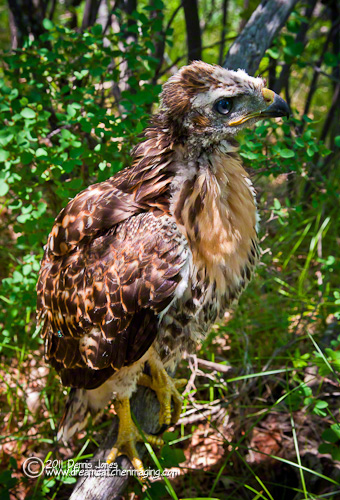 This is Herbie. He probably fledged that morning.

I was amazed at how vulnerable he was. Obviously, he and his siblings could fly from the nest, probably making a crash landing but they didn’t seem to be able to get off the ground for a couple days after that. I found each one at different times and different places over three days. They weren’t hard to find sometimes because they would be crying for the parents and all I had to do was follow their cries. 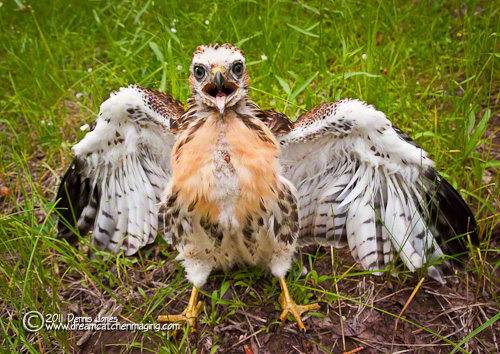 Henrietta was out in the open and oh so vulnerable.

The parents were screeching at me all the time I was taking pictures but didn’t do anything to try to drive me away. Henrietta’s got a bit of a wound on her breast, probably from flying into the end of a branch. Of course, I have no idea whether she or the others are male or female. This shot really shows off the new feathers though the feathers on their heads weren’t filled in making them look a bit odd. 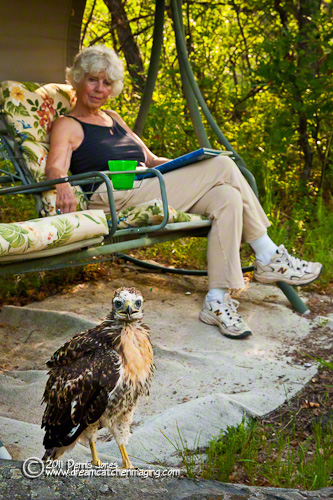 Howie joined us for margaritas one evening. He just sat on the rock completely at ease for about fifteen minutes before waddling off into the bushes.

Here’s a short two minute video I shot on my iPhone of Howie joining us for cocktails. Click on the link below. 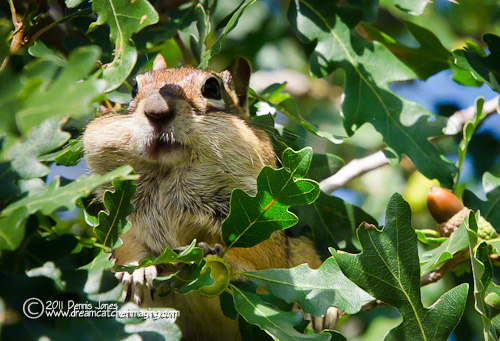 Late summer and the chipmunks stuff themselves with acorns, squirreling them away for winter. 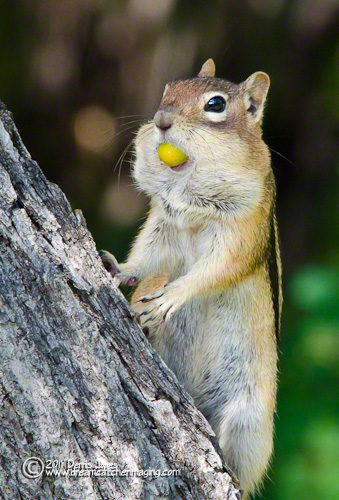 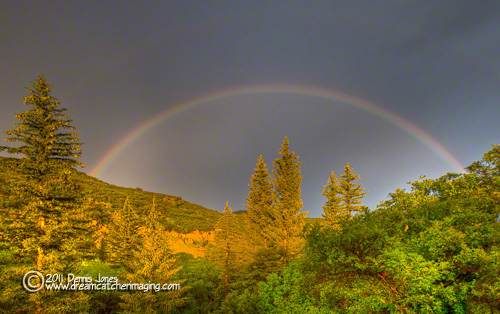 Our valley is a rainbow generator. You can just discern the double rainbow above this one. 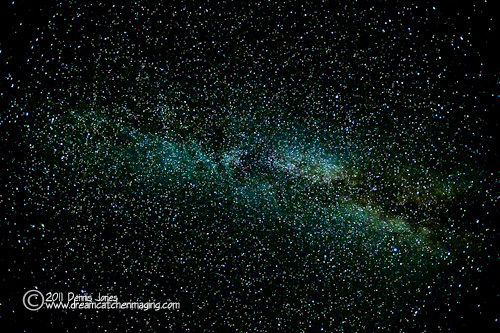 The center of the Milky Way. We’re far away from any lights so the sky on a moonless night is spectacular.