Spectacular is clearly one adjective I would use. Others would be beautiful, lush, peaceful, varied and certainly breathtaking. Newfoundland’s 240 mile East Coast Trail, traversing the eastern edge of the Avalon peninsula, is all of these and more, much more.

Yolanda and I only explored part of the northern section. In that span, we walked along spectacular ocean cliffs and through lush, peaceful forests. We have emerged from a dark wood onto a promontory dropping a shear four hundred feet into the churning sea, literally taking our breath away. 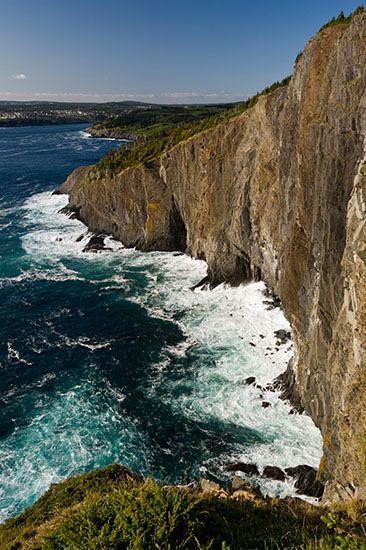 The East Coast Trail is the work of dedicated volunteers who  carved a world class trail system out of the rugged Atlantic coastal landscape. They built bridges across creeks, cut logs to span rivulets and arranged stepping stones through bogs. Their signage, cairns, posts and ribbons make trail finding a breeze. 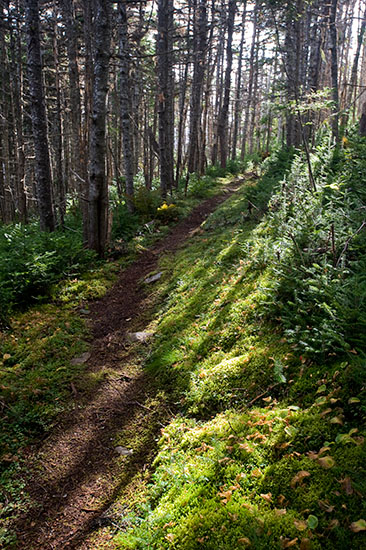 A wooded section along the East Coast Trail.

All tolled, we hiked perhaps twenty five miles of the trail. Each bit is unique, though it might be only a few miles from another section.

We found rugged, wind-swept seascapes in the northern end towards Cape St. Frances. There, a separate two mile section to Big North Cove offers an altogether different experience of moss covered rocks and the abandoned village of Cripple Cove.

This being fall, blueberries, partridgeberries, and bunchberries grow in profusion. Some days we don’t get far, ending up picking berries instead. 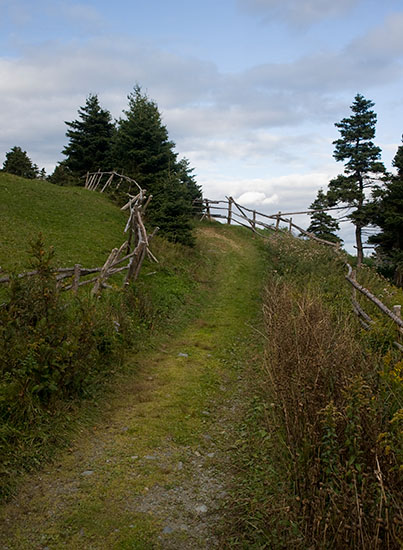 A section of the trail heading north from Torbay.

Ten miles south of the cape, we hike the section from the idyllic pony pastures of lovely Torbay north to the historic fishing village of Flatrock. It’s just five miles, but we don’t make it because the scenery is so spectacular. Here, we discover the promontory that leaves us breathless. It’s not just the shear four hundred foot drop, but also the incredible panorama of coastline and bays to the south that is so captivating. 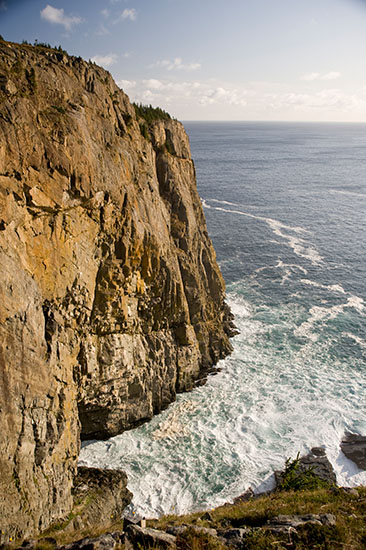 The dizzying drop at Church Cove.

A second vertigo inducing cliff at Church Cove halts our progress again as one end of a rainbow from a passing squall forms delicately out to sea. I climb a bit further to where the land drops away to the north and find the other end of the rainbow materializing over Flatrock. 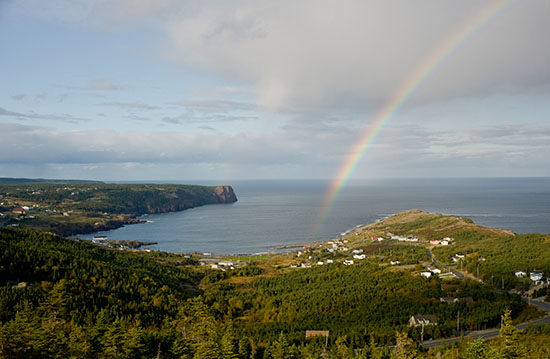 A rainbow materializes out of a passing squall over Flatrock.

South of Torbay, the trail snakes along the coast around Middle Cove, Logy Cove and Outer Cove towards St. John’s. It passes through the tiny, picturesque village of Quidi Vidi. We stop for a beer at the Quidi Vidi Brewery before passing Mallard Cottage, said to be the oldest house in North America. Across the street is the very eccentric Inn of Olde, a Newfie institution for thirty four years. It’s bizarrely cluttered interior, replete with hockey memorabilia, hundreds of souvenir spoons and all manner of things dangling from the low ceiling force another beer upon me. 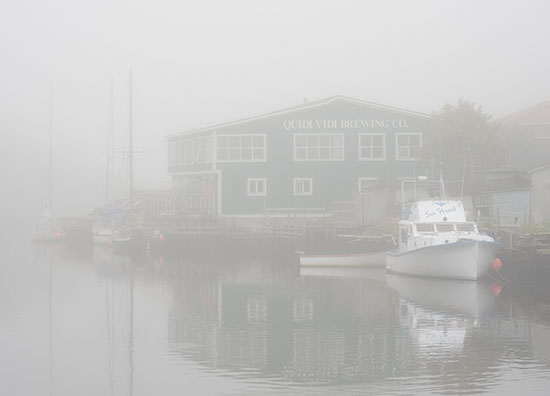 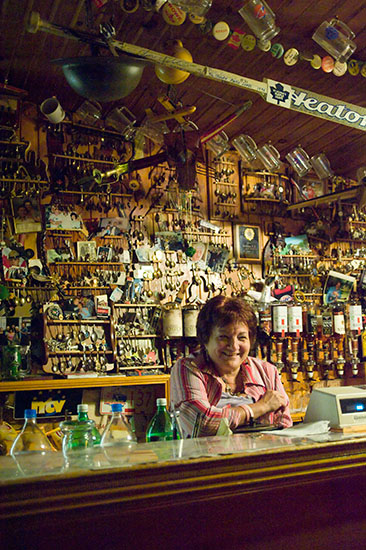 Linda, ready to pour a cold one at the Inn of Olde in Quidi Vidi.

The trail then moves into St. John’s, circling iconic Signal Hill where Marconi received the first transatlantic wireless signal in 1901. The views of the coast and the city are awesome.
Just southeast of St. John’s lies Cape Spear, the eastern most point in North America. The trail wends it’s way around the cape, past it’s historic lighthouse, the graves of numerous ships and through Petty Harbour, probably the most photographed port in Newfoundland. 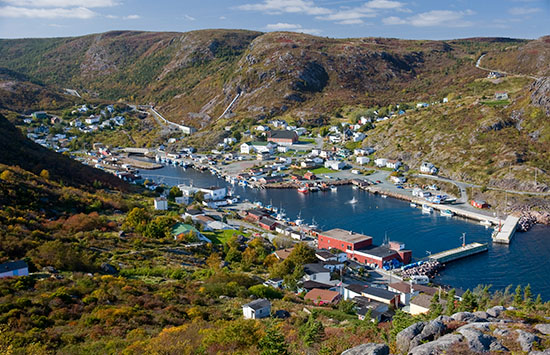 While wandering the village looking for the trailhead, we meet two extremely friendly old men who would have told us their life story if we weren’t intent on hiking-Newfie friendliness again.

Excellent signage takes us to the trail which rises steeply above the cove. After climbing hundreds of feet, it levels out into gently undulating berry barrens with expansive views of the coastline.

The trail continues 12 miles to the next section at Shoal Bay but the day is coming to a close. We hike only a few miles for a view south to Motion Head several miles away. 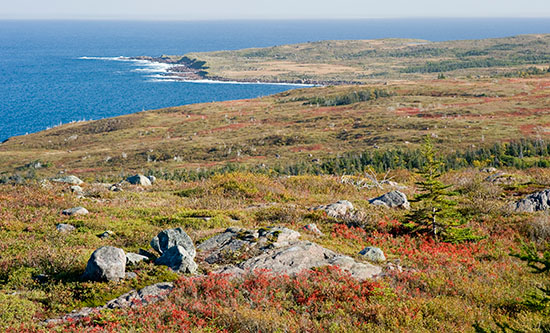 The approach to Motion Head.

There is so much left to explore. We must return. As well, there are beautiful trails in other parts of Newfoundland. The Bonavista Peninsula to the northwest, has another system of trails. The Skerwink Trail on Trinity Bay is one of the most beautiful on the island.
Gros Morne National Park in the Northwest has even more world class hiking. 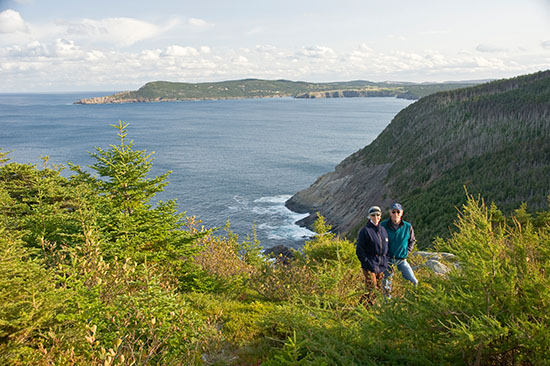 Dennis and Yolanda somewhere along the East Coast Trail.

For those looking for a truly world class hiking experience, the trails of Newfoundland are not to be missed. More information can be found at www.trailconnections.ca or by contacting the East Coast Trail Association at www.eastcoasttrail.com.