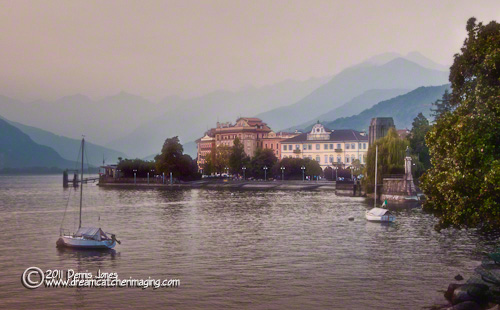 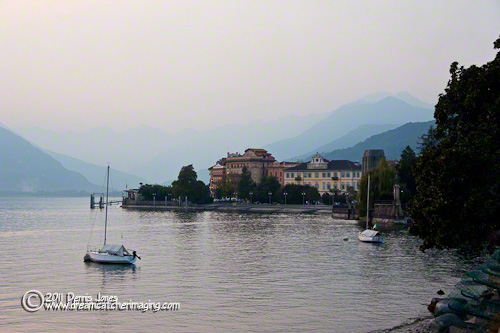 This was a grab shot just after I got off the boat that took our group from the hotel in Stresa on the western shore of the lake to a wonderful villa in Verbina. The sun had already gone down below the mountains behind Stresa. I had to get to work quickly photographing the guests at the closing reception of the conference, saw this scene and took it.

I knew I had gotten something good but that it would take quite a bit of work to make something out of it. As I wrote in the Lake Maggiore blog, the mountains were shrouded in smog, so bringing some definition to them was a challenge.

This is what it looked like after I imported the RAW file in Adobe Lightroom with my default settings:

Using the Gradient Tool in the Develop Module, I drew a gradient from the upper left across most of the image to darken the sky and mountains: 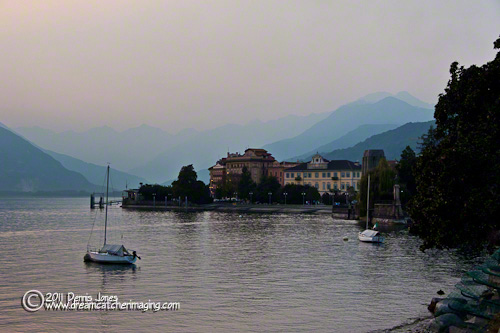 Then I added a 2nd gradient up from the bottom right to the center and adjusted the gradient to lighten that area: 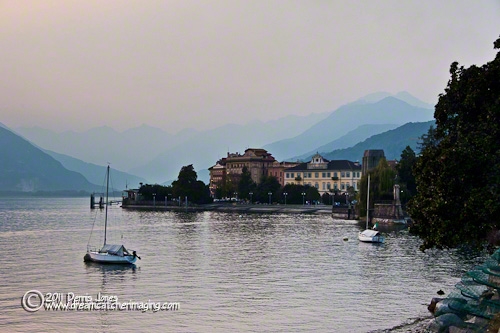 I added a 3rd gradient to further lighten the water: 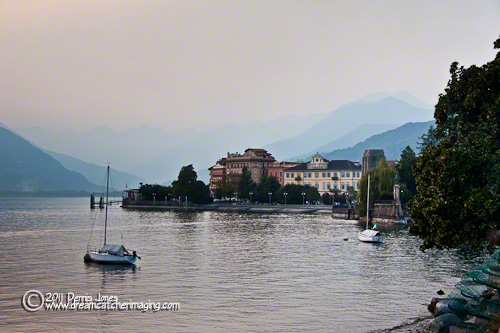 And a 4th gradient to darken just the lower part of the image: 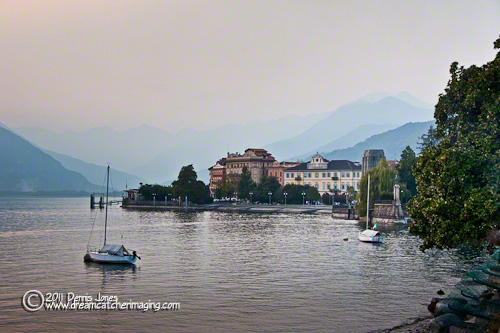 Using the Brush Tool in the Develop Module, I lightened the trees on the right, the buildings in the center and the boat:

Finally, I adjusted the Brightness to darken the entire image then cropped and straightened it: 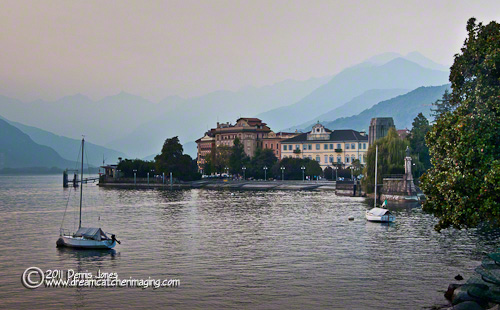 This was as far as I could take it in Lightroom and it gave me a platform to build upon using Photoshop and Nik Color Efex filters.Even though I can export images directly from Lightroom to Nik Color Efex, I generally prefer to work through Photoshop CS5 because I can build up effects using different layers and change the opacity of each layer. The new Nik Color Efex 4 upgrade has the capability for building layers of filters within the plugin. I’ve downloaded it and am learning it now but it wasn’t out yet when I did this image.So, I use Lightroom’s export feature to export the image with all my Lightroom adjustments into Photoshop. I always export it as a 16 bit TIF file and set my colorspace to ProPhotoRGB, the largest of the colorspaces.Here’s the image after using Nik’s Midnight filter: 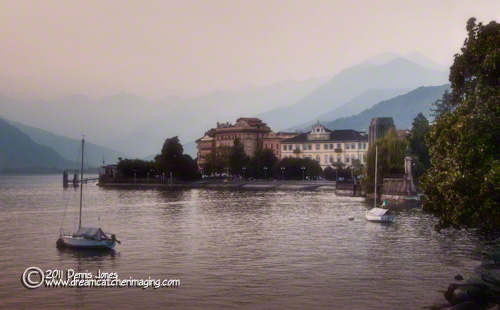 I saved the 16 bit ProPhotoRGB image as a PSD file, so I wouldn’t effect the original file, renamed it adding Nik Midnight to the file name so I know what filter I used and opened the new image in Lightroom. After re-adjusting the Fill, Brightness, Contrast, Clarity, Vibrance and Saturation, this is what I came up with: 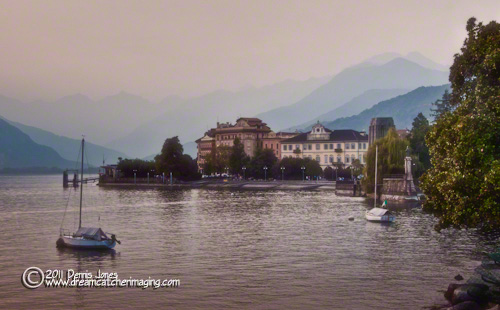 I then exported the original file with all my Lightroom adjustments once again to Photoshop and used Nik Color Efex Sunshine filter. I again saved it as a PSD, renamed it adding Sunshine to the name for this result: 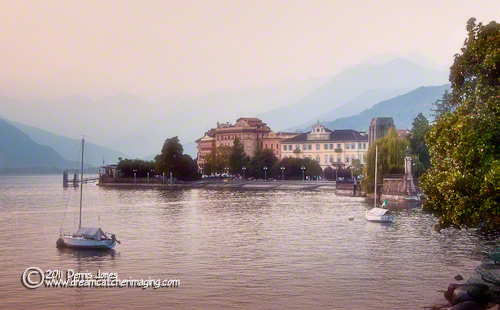 Because the Midnight file was still open in Photoshop, it was easy to select the Sunshine image: cmd (ctrl)-a, copy it: cmd (ctrl)-c, go to the the Midnight image and paste it: cmd (ctrl)-v, into the Midnight image. This makes it a new layer on top of the Midnight background layer. I highlighted the Background Layer and duplicated it: cmd/ctrl-j. Then, I renamed this Background Copy layer  to Midnight and dragged it above the Sunshine layer. Adding a white layer mask to this Midnight layer: Layer/Layer Mask/Reveal All, allows me to use the Brush tool to paint with black over the buildings and the boat and anything else I want to lighten. This hides what’s on the current layer and reveal the parts of the layer beneath I want to show through. Here’s a screen shot of the layers  in Photoshop and the layer mask which has been painted upon. The different shades of gray in the mask are different levels brush opacity. The darker the black, the more of the underlaying layer shows through: 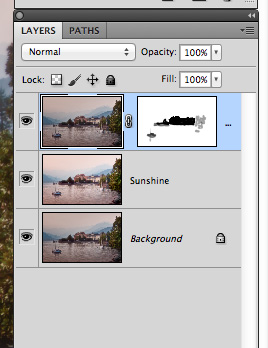 Once again, I save it as a PSD so all the layers are saved along with the image, re-named it and gave it a flag in Lightroom and 5 stares so I know it’s the completed image.

It sounds complicated but it probably didn’t take much over a half hour to complete it and it’s obviously a much better and more appealing image than the one that came straight out of the camera.